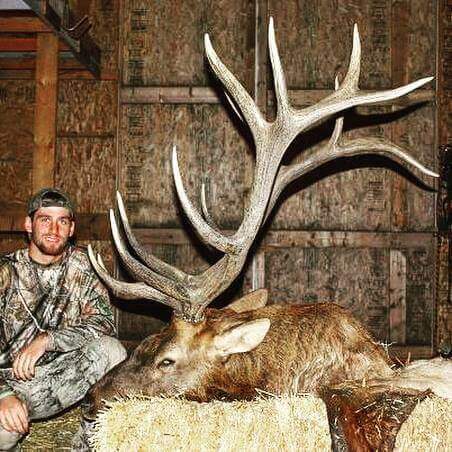 This trophy elk hunt takes place in the Canadian Rockies of Northwest Alberta during the rut.  The outfitter has allocations to hunt three separate zones in close proximity to each other.  Two of the zones are 6 point minimum areas, which means a bull has to have at least six points on one side to be legal.  These two zones are side by side and are accessed by horseback, where you’ll hunt from a remote satellite wall tent camp.  A comfortable main lodge is the hub for the majority of the hunting here. A third zone is a 3 point minimum area, but some great bulls are also harvested here.  This zone is accessed by ATV and argo and you’ll stay in a comfortable guest ranch with all of the amenities of home.  Both hunts can be physical in nature so be prepared to do some hiking each day.  The majority of the hunting takes place in September and early October during the rut.  Bull elk in the 300″ plus category are the norm with 360 class and better bulls being harvested in the past!  As an added bonus, the rifle elk and moose season coincide and a limited number of elk/moose combo’s are available each season.  These are ten day hunts during the elk bugle and moose rut.  Bull moose are generally 35″-40″ plus. Licenses for both species are simply purchase on arrival (no draw required!).  These hunts are limited so call soon!

Plus 5% GST tax and license

Fly to Edmonton, rent a vehicle, and drive west a couple hours to camp.  Directions will be provided.