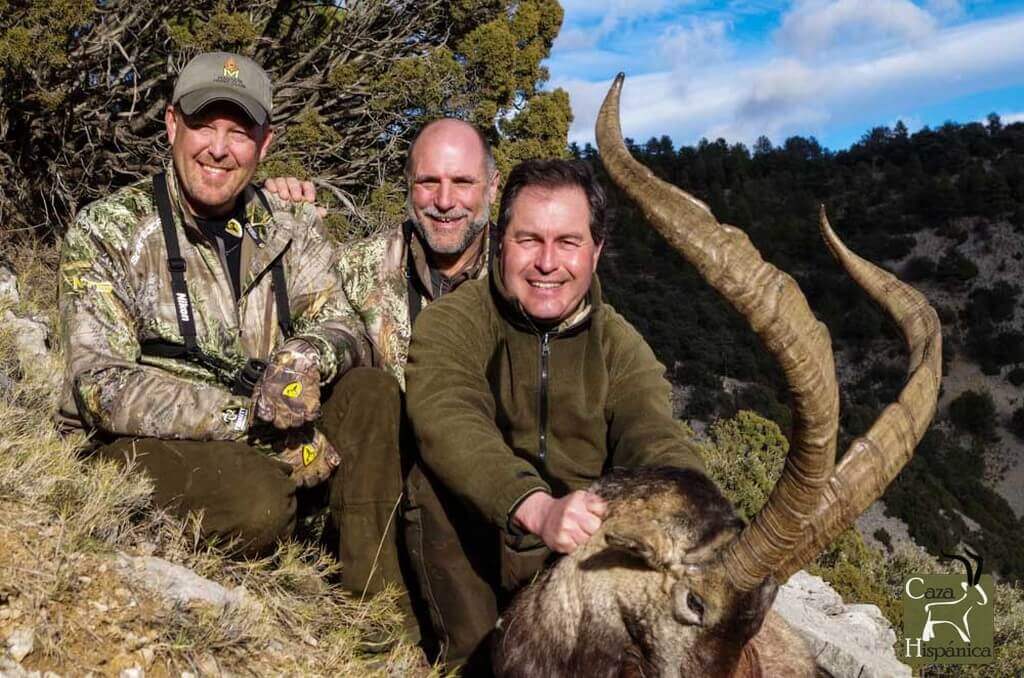 The geography and climate of Spain are extremely diverse, and the country is home to a wide variety of wildlife and species. The Spanish animals, most of them spectacular mountain species like the Spanish Ibex and its four varieties: Beceite Ibex, Gredos Ibex, Southeastern Ibex and Ronda Ibex, have become some of the highlights of any assertive hunter or huntress.

Also known as Capra pyrenaica hispanica,  the Ibex is our emblematic species in Spain. This majestic animal that lives in the high tops of the mountains, moves around gracefully, jumps on and over rocks with agility and conquers with vitality. No wonder in Spain it is called El Macho montés, the male of the mountain as the mountain is its home and territory.

In Spain there are 4 main subspecies of ibex: Beceite, Southeastern, Gredos and Ronda. Hunting the four of them is called The Spanish Ibex Grand Slam.

Beceite ibex  – This is the Spanish ibex with the widest horns and the darkest type of the 4. Typically, the horns are straighter than in Gredos ibex and have a spiral turn of less than 180 degrees. Horn thickness remains constant for half the length, then decreases toward the tip, which is not as thin as in the Gredos race. While this is the typical Beceite horn conformation, other horn shapes may be found in this region and even in the same herd. Located in the Eastern part of Spain, 2 hours drive from Valencia airport.

Gredos ibex – The Gredos ibex is the dark in color and has the largest horns. Typically, the horns are lyre-shaped with a pronounced curve and a spiral turn of more than 180 degrees. Horn thickness decreases progressively from the base to the very thin tip. While this is the typical Gredos horn conformation, other horn shapes may be found in this region and even in the same herd. Located in the Central-Western part of Spain, 2 hours drive from Madrid airport.

Southeastern ibex – Smaller and lighter in color than the Beceite and Gredos types, but larger and darker than the Ronda type we have the Southeastern Spanish Ibex. Horn size and shape vary considerably from place to place, with those from the Sierra Nevada generally the largest. The keel is smooth, making the horns almost round in cross-section. Located in the South-Eastern part of Spain, closest airport: Almería.

Ronda ibex – The smallest type of Spanish ibex with the smallest horns. Overall color is a light brown. The horns resemble those of an Alpine ibex, typically growing upward in a V-shape, then backward with a spiral turn of only 90 degrees. Horn thickness is constant for half the length, then decreases gradually to the broomed tips. While this is the typical Ronda horn conformation, other horn shapes may be found in this region and even in the same herd. Located in the South of Spain, closest airport: Málaga.

The accommodation and the food is purely Spanish, in the middle of the country side where you get to see, taste and feel the essence of the Spanish culture.

For all hunting packages purchased, accommodation has been carefully chosen. We have selected for our clients the best rural and modern hotels near hunting areas. These hotels and country houses are in serene places and are equipped with all the facilities and necessary comforts for a good rest after a day of hunting. Your hunting experience will always be accompanied by fine dishes at prestigious restaurants where you can try authentic Spanish recipes and ingredients. Seafood, fresh fish, orange juice, lamb, wine, cured jam and cheese, paella, olive oil and other gourmet experiences will remain in your memory as a gastronomic landmark.

Includes: Includes Daily rates for a 10 Day hunt for one hunter and 4 non-medal ibex trophies (one of each species).

$350/day/person – observer (if extra vehicle/staff is not required)

*Prices for the above big game species are for non-medal trophies. Please consult our Bronze, Silver, Gold medal trophy upgrading prices below according to the C.I.C scoring system below.

Meet & Greet at the nearest airport to the hunting area and assistance with firearms clearance.

All ground transportation during the hunt (4WD).

First preparation of trophies in the field.

Full board accommodations and meals, with Spanish wine, beer or soft drinks during meals. Either luxury hunting lodges or hotels close to hunting area

Gratuities or tips for staff & guides.

Alcoholic drinks, except for those included with meals.

Touring days will have an additional charge for touring guide and car.

Last night at the hotel before departure is not included in the hunting package.

Hotels, meals and any other expenses before or after the hunt.

Anything that is not specified as included in the daily rates.

Day 2 – Pick up at the airport, ground transfer to the hunting area; lunch and dinner at the hotel