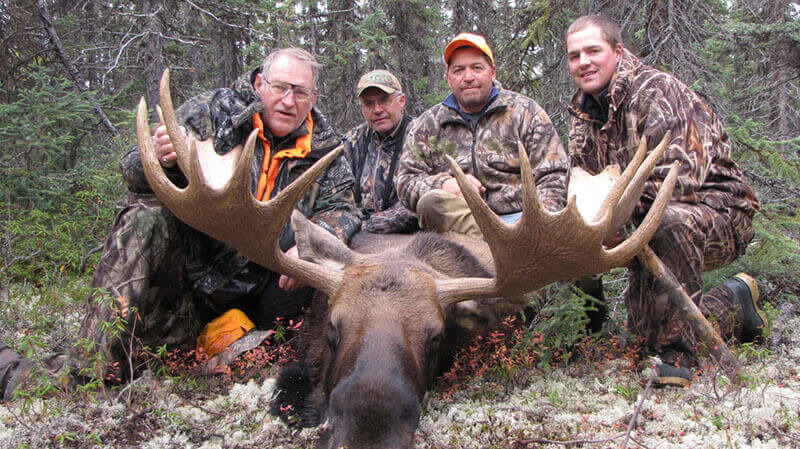 What better epitomizes a great Canadian hunt than the pursuit of Trophy Moose? Through WTA, our Manitoba outfitter offers some of the largest Canadian moose in all of Canada! Their remote area is home to HUGE bulls. Their average spread is 54.5″ and they have taken a monstrous 66″ (205 B&C) and 2 at 60″ (195 B&C). Every year they take several in the high 50s. It doesn’t get any better than this! The terrain consists of a vast region with over 12 rivers and a hundred lakes. Throw in the various forest fires which have run through the area and you have the ideal habitat for big moose. They hunt from a variety of camps, ranging from plush outpost camps to well-appointed tent camps. They will choose the camp per the situation and utilize vast area to constantly rotate hunts year to year. Camps hold from 1 – 3 hunters per camp and they rarely mix parties, giving you a truly customized hunt. This enables them to put you in the best situation possible for your quest for deer family’s largest member. These animals have never seen a hunter other than the rare trapper and now yourself. Success runs 60 – 85 %, varying for year to year, and opportunity is 85%. They hunt by boat, traveling to different areas by water, and repetitively calling, hoping to lure one to the water’s edge. It is like hunting a ghost, except when the ghost appears, he stands 8′ at the shoulder and weighs over 1200 lbs. Many a hunter has frozen at the first sighting of such a massive animal. This is Canadian moose hunting at its finest!

2×1 guide service, meals, camp accommodations, round trip transportation from Thompson MB, field care of meat and trophy back to Thompson

cabin, tent camp or lodge depending on hunt locations

Fly or drive to Thompson Manitoba, where you will overnight and charter to camp the following morning