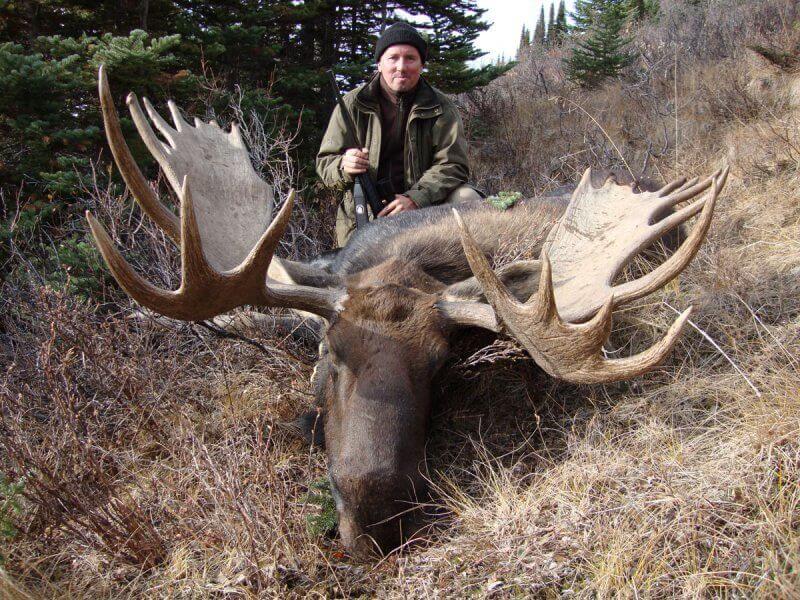 Northern British Columbia is home to some of the largest Canada moose in all of Canada.  Due to their geographical location being only 120km from the Yukon border, the bulls here tend to be much larger in body size and antler size than the average Canada moose. These Moose tend to be found all over during the summer, from the lake bottoms feeding on their favorite acquatic vegetation; right to the mountain tops to take advantage of the breezes keeping the bugs away or maybe just for the view. By late August the bulls’ antlers are beginning to harden and they prefer the high thick cover provided by balsam thickets. There they can easily get into the open to feed and escape predators. By early September they are rubbing the velvet off their antlers and starting to move again. They are probably at their most visible time during this time with what seems like two big white plywood billboards over their heads, before the antlers darken.

When the rut starts by mid-September, they are really on the move, gathering up harems cows and defending them from any challenger. This is when the excitement really starts for the hunters and some people claim that it’s even more of a thrill than bugling in elk just because of the massive size. The rut is somewhat weather dependent but usually lasts into the 3rd week of October. These ten day horseback hunts are from cabins and spike camps, guided 1×1, and are all-inclusive with the option to hunt other animals.