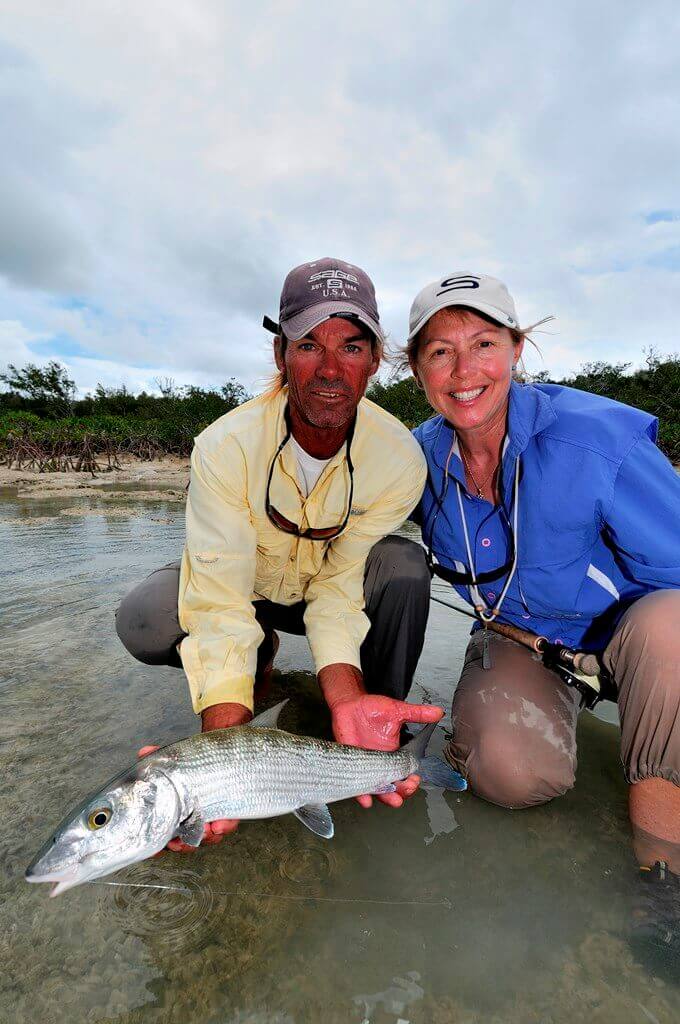 The Abaco’s are a string of islands 175 miles east of West Palm Beach. The “Marls” of Abaco are a vast expanse of some of the most rich bonefish habitat in the Bahamas. Located along the western shore of Abaco, the Marls encompass over 400 square miles of flats, and have long been known as one of the most productive bonefish fisheries in the Bahamas. For twenty miles, the average depth if four feet, a flats fisherman’s paradise! Simply put, it would take you a lifetime to fish this area. Abaco is also one of the easiest out islands to access, with many daily flights from most major airports in the southeast such as Miami, West Palm Beach, or Ft. Lauderdale. This first-class lodge recently opened in April of 2009 and could not have been placed in a better area. With a fleet of brand new Hells Bay skiffs waiting at the lodge’s dock, most flats are just a 15-25 minute run away or less. The boats are equipped with padded swivel seats with back rests, leaning bar on the casting deck, poling platform for your guide, and 50 hp Yamaha outboards. The waterfront lodge caters to small parties, accommodating a maximum of eight anglers, each in individual air-conditioned rooms with a private bath. The main lodge features the dining area with fully stocked bar, high speed internet, phone service, satellite television, and a tackle shop with plenty of equipment for purchase or rent. After a day on the flats, guests can take a dip in the pool and sip an ice cold Kalik beer before appetizers and a great dinner. In the evening, relax on the outdoor deck or around the fire pit. The Marls are known for its abundance of 2-4 pound bonefish with possible shots at fish in the 6-8 pound range. You may also fish Cherokee Sound on the eastern shore side of the island, which is known for larger bonefish, as well as a few permit. A delicious picnic lunch with cold drinks will be packed in a cooler on board. The majority of the fishing is done from the boat. However, there are some flats that provide some great wading opportunities. Owned by one of the most well respected owners of sporting lodges in the world, you can expect comfortable accommodations, world-class cuisine, top of the line equipment operated by seasoned guides, and a staff committed to providing first-class service and attention to detail.

Fly to March Harbour where you will be met by a lodge representative and transferred a short distance to the lodge.