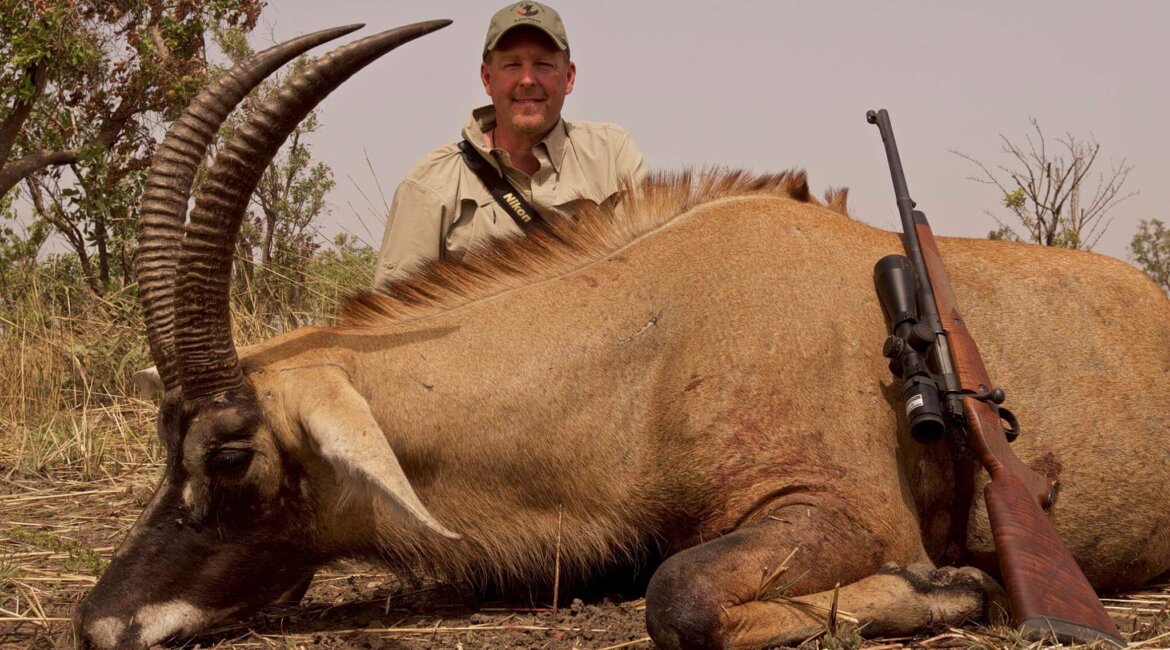 On January 18, 2016 there was a terrorist attack on the Splendid Hotel and a coffee shop in Burkina Faso’s capital of Ouagadougou. Thirty people were killed and at least 56 more were wounded. There were 176 hostages that were eventually released by Al-Qaeda in the Islamic Maghreb whom took responsibility for the terror.

Previous to this and a minor incident in October 2015 that coincided with a presidential election, Burkina Faso had historically been one of the safest countries in western Africa. The country has gained some popularity in the past few years as being a quality hunting destination where buffalo and roan hunts could be had for a fraction of what they cost in southern and eastern Africa. For the reasons, I had put together a small group of American hunters to go on a short 7-day safari to the southeastern part of the country, but since we were scheduled to leave less than two weeks after the Ouagadougou attack, we all considered canceling the hunt.

Through talking to our contacts in Burkina Faso, and a phone conversation I had with the US Embassy there, we finally decided to go on with the trip. We were a group of 5 experienced African travellers (and my African first timer cameraman Lee), so we felt we could use our past experience and common sense, and be OK.

I was filming for the new TV show Cabela’s INSTINCT; Expedition Series, so Lee and I went a day before the other guys to get a bit of footage of Ouagadougou and the surrounding area. We did drive by the Splendid Hotel, and the carnage was bad.

Everyone arrived the next day, and air France had left Russell Marshall’s and Jay Cohea’s rifles in Paris. They would show up two days late to camp, but it really didn’t matter.

We are all accustomed to being on “African Time”, and things not happening right on schedule, but this trip took that concept to the next level. We were supposed to leave for the 4-hour drive to camp at 9:00AM, so we figured it would be 10-10:30. We got on the road after 2:00, and it took us just short of 6 hours because the pothole ridden road is so bad, and we had to travel for a couple of hours after dark.

We got settled in, and the next morning we were checking the zero on our rifles just after daybreak.  Since Jay and Russell had no guns, they jumped on with other hunters, and since I told Jay I wanted a red buffalo and would hold out at least half the trip, he went with me with the understanding that if the opportunity at a good black bull came up, he would shoot.

For our group, day 1 produced no animals, but we did see 6 groups of roan and various other animals including elephants, hippo, croc, and western kob. The other guys faired a bit better. Skip Nantz took a fantastic 29” western roan, and Steven Thurman took his buffalo, both before lunch. Skip also stalked and killed a kob in the afternoon, so spirits were high that evening.

On day 2, Jay went with Steven and Russell went with Skip since they had taken two of their primary animals already. Not long after daylight we spotted a loan roan bull and made a stalk. We were able to get within 75 yards undetected, but we elected to pass as he looked to be about 25” and not terrible heavy.

An hour or so later, Oually (Wally), my local guide/tracker, spotted a nice herd of 40-50 buffalo in the distance ahead of the land cruiser. We got off and made a wide loop around the herd to get the wind right, and eventually we were within 25 yards of some of the buff. Before we found a mature bull, the lead cow made us, and the herd took off.

Over the next two hours, we made four more approaches on the herd, once at the same time a lion was stalking them, but we just couldn’t find a good bull in the open.

Finally we got in front of the herd, and they were walking in our direction. The herd was scattered out for 100 yards, but the first two animals to come by passed at about 25 steps. They were both immature bulls, but the third in line was a good, wide mature bull, and he was red.

Oually pointed out that the red bull was the one to shoot, and when he cleared a dead tree at about 30 yards, touched of the trigger of my .416 Rem and hammered him low in the shoulder.

The bull bucked in the classic heart shot manner, and he was piled up within 75 steps. I put an insurance shot between his shoulder blades, and then was able to admire my very red western savannah buffalo. He was fully mature but not a worn old, over the hill bull. I would have preferred a worn old warrior, but he was fully mature and he was exactly what I had hoped for as far as color phase. I was very pleased.

That evening I learned that Russell had taken a nice kob.

On day 3 I was after roan, and though we saw a few and made a couple of stalks, I came up empty. Russell and Jay had received their guns, so we were all split up, and the other guys made the most of it. Russell, Skip and Jay all took really good old buffalo, and Jay got a very nice Kob. Steven shot both a good roan bull and reedbuck, so he and Skip were “tagged out” on the animals they were after. Only 3 days into the hunt, and all we needed were roan for Russell, Jay, and I, and we would be done (I was only hunting 2 animals).

The next morning about 9:30AM my group spotted two bull roan together a few hundred yards out. We glassed them, and there was one bull that I immediately said I would shoot without a second thought. The other just looked smaller, and I didn’t pay much attention to him as I was focused on the heavy one.

We drove on for about a half mile, got out, quartered into the wind and began stalking and trying to locate them. Oually found the tracks, but we didn’t seem to be making much progress, when out of nowhere, up went the sticks, and I had a bull broadside at 100 yards. His head was turned looking straight at us (for a good while), so I waited for the thumbs up to shoot. Just as I got the OK, he turned and took off. I knew that was our chance, and we had been too slow.

We slowly worked toward where he had just run just over a small rise, and soon the sticks went up again. This time he was walking quartering towards us with his head lowered in front a bit, and I could see it was the big bull.

When he cleared a dead tree, I punched a 370-grain Cutting Edge Bullets Safari Raptor low in his right shoulder, and he took off obviously hit hard. I was going to shoot again, but my guide ran somewhat out in front of me, so I got the barrel to the sky, and we walked toward where we had last seen him.

He was down but moving his head, so I put a finisher in him. I must say that I am amazed how tough roan are. He took the .416 CEB through the heart and still went about 75 yards.

The western roan bull was magnificent. I couldn’t have told you if he was 24” or 29” (the forestry staff later measured him at 27.5”), but I knew he had secondary growth (as all the bulls we took did), was heavy, scarred and old. He was perfect. I rank him as one of my most special African trophies.

When we all got back to camp Russell and Jay both had also taken good heavy roan bulls, so we had taken all of our animals (5 roan, 5 buffalo, 3 kob and a reedbuck) in 4 days of a 7 day hunt. No wonder most of the hunters hunt 2×1 in that concession.

We relaxed for a couple of days, took photos, visited with locals and got packed up. We knew how rough the road was back to the city, so we decided to make the drive a day early to give ourselves a cushion in case of any trouble.

The ride back to the guesthouse where we stayed in Ouagadougou only took about 5 hours this time, and we arrived in time for an early dinner and a few sundowners around the pool. It was a nice way to end the trip, and we all flew out the next day without incident.

All in all, the trip was a great adventure. Russell was the only one of our group who had been to western Africa before (Benin and Cameroon), so it was an eye opener for most of us. The country and people are incredibly poor, but most of the locals we encountered were very friendly. Our camp, food, etc. was not up to the standards of most places in southern and east Africa (though it was all fine), but the hunting was excellent and that is what really mattered.

My takeaway is that Burkina Faso is a great place to go for an affordable safari where you can take marquis species like savannah buffalo and roan much cheaper than elsewhere in Africa. You just need to know that the amenities will not be of upper standards, but if you are there for the hunt, it is a great value. I was even able to work out some deals for two and three buffalo hunts for less than the price of most single Cape buff hunts in places like Zimbabwe, Mozambique and Tanzania before I left.

Burkina Faso is not the place for a first African Safari: period. That being said, for those of us who love a good adventure and just want to hunt, it is a destination to seriously consider.

Tim Herald is an owner/consultant of Worldwide Trophy Adventures (www.worldwidetrophyadventures.com), and may be reached to help book a trip to Burkina Faso or anywhere else at [email protected].

I chose a one gun battery for this trip and took a Winchester Model 70 Safari chambered in .416 Rem. The .416 will hold up very well out to 250 yards, and since I would be hunting both buffalo and plainsgame with the same rifle, I wanted to be versatile but still have plenty of stopping power.

My load was a 370-grain Cutting Edge Bullets Safari Raptor over 75.5 grains of Varget powder. The gun clover leafs at 100 yards, and I have taken a ton of game with the CEB’s in recent years. There are 6 pedals that sheer off and travel in a star shape after about 6 inches of penetration, and the back portion of the bullet is remains a brass solid. You get massive trauma from the pedals, and total penetration for the solid portion. I had exits on the buffalo and roan, and both were shot at quartering to angles.

My rifle was topped with a Nikon Monarch 7, 2.5×10 scope. Again, I like having a 10x scope in case of longer shots, but being able to turn it down to 2.5x is a great benefit when buffalo hunting.

I think it is very important for hunters to take good binoculars on a hunt like this. You don’t really have trained a trained PH, more of a tracker/guide, so I recommend that every hunter really look over the animal they are shooting for themself before the squeeze the trigger. My Nikon EDG 10×42 binoculars go everywhere with me, and as usual, they were flawless. The clarity and light transmission are superb, and I can focus through multiple layers of bush to really look at the animals of interest.