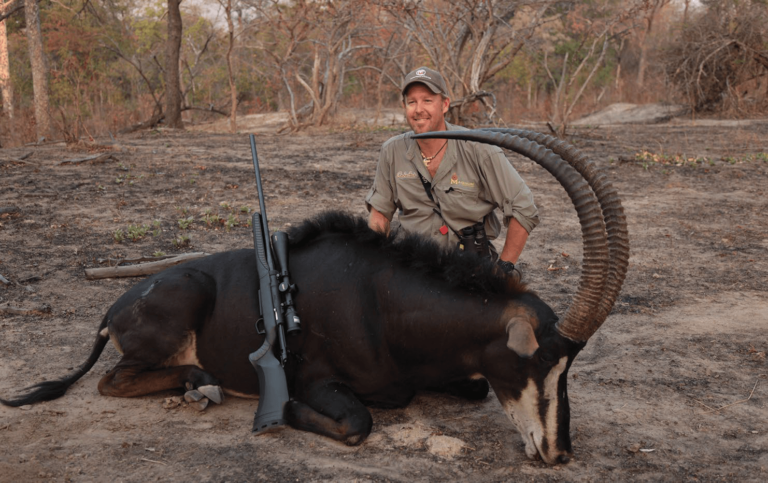 To me the sable antelope is worthy of its royal status, and personally I find a jet-black bull the most striking of all the antelope on earth. Some may argue that the beautiful bongo, the elusive mountain nyala, or the majestic Lord Derby’s eland are superior trophies, and to each their own, but the fact that sable are a bit more common as far as numbers and distribution than these others does not diminish my reverence for this absolutely magnificent creature.

The first time I hunted sable I was unsuccessful in bagging a bull, but that isn’t really a fair statement. I did have a sable on license, and I did want one badly, but I was also trying to squeeze sable in with a leopard, buffalo and tuskless elephant all on a ten-day hunt. I was successful on all the others, but only got to hunt sable one afternoon, and the herd we found gave us the slip in some thick mopane.

When I booked my first hunt with Kambako Safaris in the wild and rugged Niassa Reserve of northern Mozambique, I again made sure to have a sable on license. I was once more hunting leopard and buffalo, but I wanted to devote more time to hunting sable on this trip. The fact that I killed my leopard fifteen minutes after daylight on the second day of the hunt certainly opened up some time to pursue sable.

To put things in perspective, one needs to know about some special rules that Kambako Safaris abides by. First, they only shoot six year old or older lions to work within the Niassa Carnivore Project’s parameters. Secondly they only shoot cats in daylight even though night hunting is legal. Third, Kambako only hunts dagga boy buffalo bulls and leaves the herds alone so they flourish and stay in the area, and lastly, they only take past prime breeding sable bulls.

I had never heard of such a rule on sable, and Kambako Managing Director Jumbo Moore explained it to me. “We want our sable population to grow, and we want the herds comfortable within our area, so just like with our buffalo, we only take sable bulls that are out of the herds. We also look for secondary horn growth. If you look closely at the base of a sable’s horns, you will see a thickening on old bulls. The rings, or ridges, sort of fill in down at the bases. This secondary growth only starts when a sable is six years old, and it grows approximately an inch a year. We are very particular and try to make sure all the bulls we take are out of herds and have secondary growth. So you have to get a good look at a sable before you shoot it.”

I was to learn a lesson on this during the afternoon of the day I took my leopard. My friend, and PH, Stu Taylor, told me about a big sable bull he had seen a few times in a certain area prior to my arrival. He knew it was the same bull because he had lots of secondary growth and the tip of one horn flared out while the other was straight. We went and checked the area and found the bull’s tracks by a waterhole in a dry creek bed, but the tracks were a couple of days old and not worth following.

Stu then wanted to go up in the hills to an area where there are a few spring seeps and sable traditionally have called home. About 3:00pm, we were slipping around a hillside when our head tracker Davey pointed out some sable across a ravine 250 yards away. We crept ahead another 100 yards, and we could see about twenty sable calmly feeding on the slope. There was a big black bull in the middle of the herd that immediately caught my eye, and I looked at Stu pleadingly. He smiled and whispered, “I wish we could go after him, but he is a herd bull and is off limits. I would guess him at about 42″. He is a gorgeous bull, but we just don’t shoot those herd bulls, sorry Tim.”

To say that my heart didn’t sink would be a lie. This was the sable of my dreams, completely unaware of our presence, and I had to just watch him feed. To top that, even though Kambako’s average sable is right at 40″, a bull of 42″ is a super trophy for the area. Though the official line for Roosevelt’s sable is the Ravuma River on the Tanzania border (only forty miles away), all of Kambako’s PHs think that the sable in Niassa are indeed Roosevelt’s, and I believe some DNA testing has been done that supports this. The Niassa and Selous Game Reserves have a common corridor for wildlife, and it makes sense to me that the sable can easily move back and forth like the elephant and lion do. The sable in the Selous are Roosevelt’s, so…

We took our buff on day seven of the safari, so we really ramped up our sable efforts then. We ended up putting a trail camera on the waterhole where Stu knew the big lone bull was drinking, and through the remainder of the safari, we found and followed his tracks a number of times. We felt that we were close on a couple of occasions, but we never actually laid eyes on the bull.

When I hit the ground the following August, Stu told me that he had recently seen “our” sable twice in the same area we had hunted him the year before. We were both keen to give this bull a try, and after checking lion baits and having an exciting encounter with two young males the first morning, we decided to go check on our flared horned sable during the afternoon.
Our waterhole from the year before was completely dry, so we followed the sandy creek about a kilometre to where it joined a small river. There were a number of elephant bore holes close to a small seep where a herd had been digging in the sand to get to water, and it was there that Davey found the tracks of a lone bull sable.

Stu and Davey felt like the tracks were fairly fresh, and soon it was evident that the sable was meandering in no particular hurry. He was weaving around in the riverbed, and Stu said he was feeding a bit on the edges, but he seemed to be looking for a water source. The elephant sign was as fresh as the sable tracks, so he might not have been able to drink if the elephants were at the water.

We continued to follow the tracks for another twenty minutes or so, and suddenly Davey dropped to his knees and Stu threw up my BogPod. When I stepped up to the sticks, Stu was glassing, and I asked what he saw. The area was quite thick riverine and looked more like bushbuck habitat than that of sable, but when he whispered, “sable bull”, I had already seen the black spot in the dense tangle.
I could see the bull’s horns sweeping back toward his spine, and I slipped the safety off on my .300 Win TC Dimension. All I knew was that he was alone, he was about eighty yards away, and I had his shoulder covered with my Nikon Monarch’s crosshairs. I was just about to ask Stu if he could see secondary growth when he told me in no uncertain terms to “Shoot that bull now!”

I didn’t need to hear more than that, and I sent a Winchester Supreme 180gr Accubond toward the sable at 2950fps. The bull bucked and dashed into the thick vegetation, but I felt 100% confident that I had hit him well.

We found his tracks and about twenty five yards after that we found good blood. After twenty five yards of following this sign, the country opened up, and the blood spoor dried up. I was really second-guessing my shot and wondering if I had hit a branch or some other obstruction as we continued on the sable’s tracks. With no blood for fifty yards, I was breaking out in a cold sweat even though it was 85º F out, but then Stu pointed ahead, and I could see the sable was down about seventy yards in front of us.

When we reached the fallen monarch, I was simply in awe. He was all I had ever hoped for in a sable bull. His dark coat was glorious, his long thick horns swept back like scimitars, and he had 6 ½” of secondary growth at his bases.

Best of all, Stu pointed out that one horn flared out, and that confirmed that this was our bull from the year before.

Even though I killed him on the first day of my second safari with Kambako, Stu and I felt like we had definitely earned this bull. We had put in at least parts of seven days looking for him the year before, and there was not another sable in all of Mozambique that I would have rather taken. Not that it mattered, but his horns stretched the tape at 42″. The real prize to me was that our bull was aged at over twelve years old. He truly is royalty to me.

This article originally appeared in African Hunter Vol 20 No 2. http://www.africanhunteronline.com 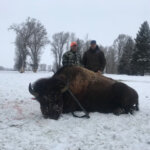 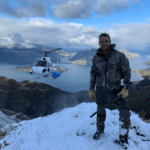 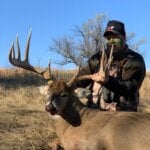 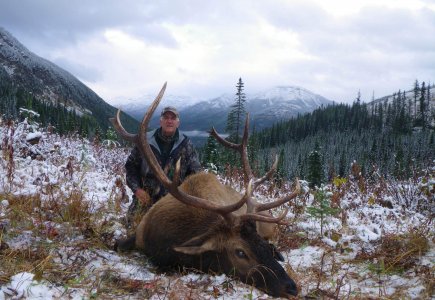 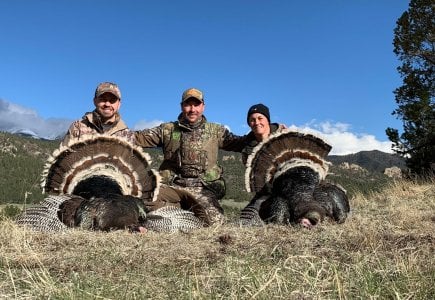 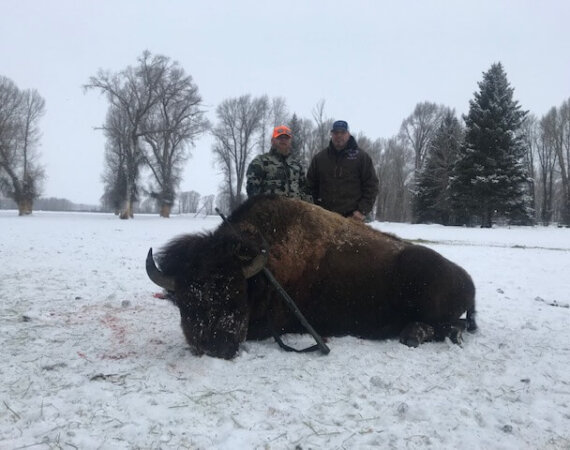 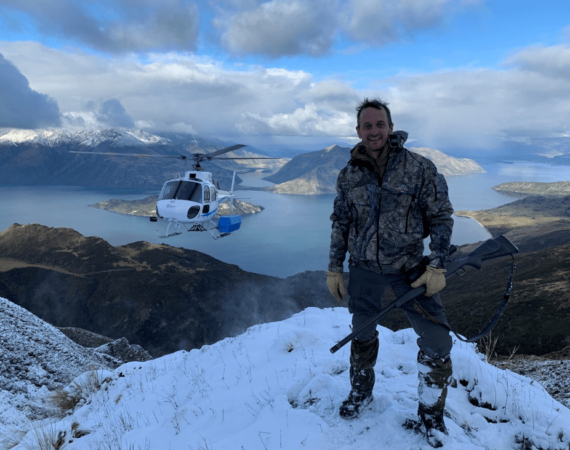