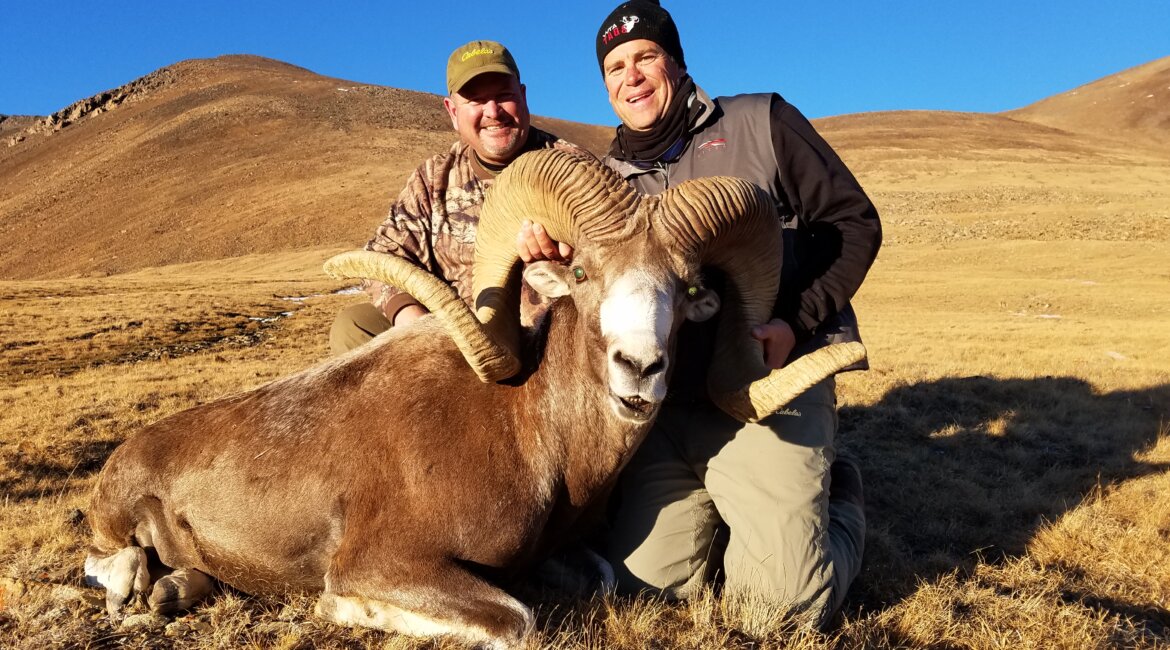 When I first started in this business I was certain I’d be doing a fair bit of hunting related travel. However, I always wondered if I’d ever get the chance to hit Mongolia, specifically the area the High Altai argali calls home – the Altai Mountains of the extreme northwestern part of the country. Well, on September 11th I got my chance.

Actually, I knew it was coming for a while. A few years back WTA’s top client, Dan Cabela, booked a five species hunt to include: High Altai argali, Altai ibex, yak, Maral stag and White-tailed gazelle. As part of the booking agreement, it was decided that I would accompany Dan on his hunt. What a dream!

Dan was successful at taking all five species, but for the breath of this piece, I will only cover the sheep and ibex portion of this incredible adventure.

Once in Los Angeles, clients will fly to Incheon, South Korea. Expect a long layover in Incheon where you will then fly into Ulaanbaatar (UB), Mongolia. You will then overnight at one of the nicer hotels in UB and then, the following day, take an early afternoon flight to the Khovd Provence of Mongolia. From Khovd you will drive roughly four hours across the Gobi Desert to the sheep/ibex camp at the base of the Altai Mountains.

Our camp was set at approximately 8,500 feet above sea level. We slept in a Mongolian ger. A ger consists of a material cover, wooden columns, a round window at the top, thin wooden poles and floor. The inside was very comfortable with cots for sleeping, a small table for eating and a make-shift sink for washing. A wood stove and pipe ran up through the center of the structure. I use the term “wood stove” loosely. If the country of Mongolia actually had any timber, it would work perfectly. Instead, yak dung is burned to keep you warm during the cold nights in the Altai. I’m not going to lie, the first night is not easy, but after a hard day of hiking, coming back to a warm ger is sure appreciated. 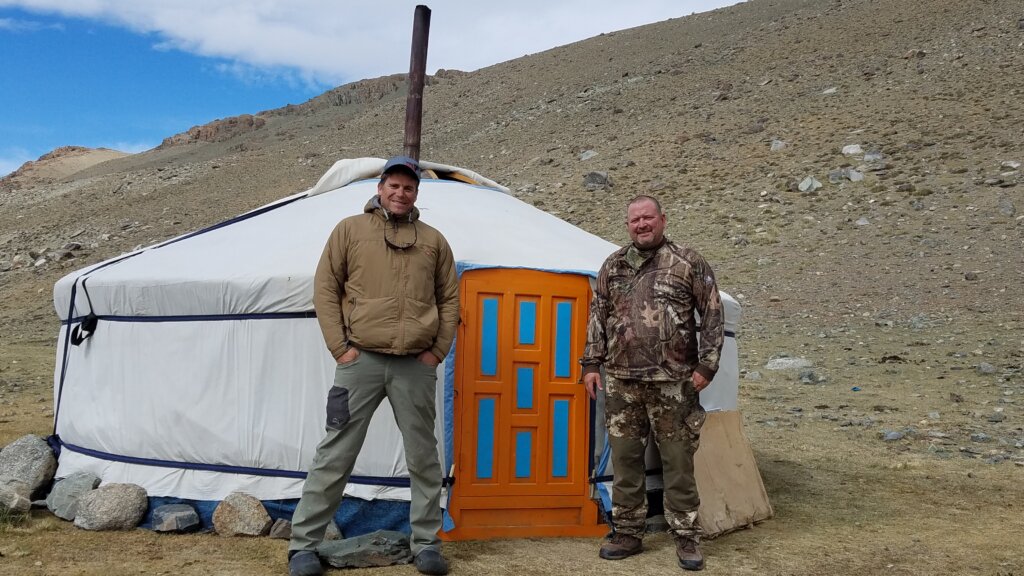 The food is definitely different, but again after long days and short nights, it’s much appreciated. I would absolutely recommend not being shy on your preferences. I’d recommend requesting fruit and maybe some dry cereal for breakfast. Lunch will take place on the mountain. This normally consisted of some type of burrito or dumpling which was very good. Bring Power Bars or Cliff Bars, from the states, and have them in your pack. Dinner is very nice and takes place back at the ger. However, different people react differently to foreign foods, so packing roughly 10 packages of Mountain House is an excellent idea. Bottled water is prevalent. Again, don’t be shy or feel like you’re being offensive. The Mongolian people are very understanding to the differences in culture and food preference.

One word – AMAZING. Our main guide and translator was named Byasaa. He did an excellent job and I felt completely safe my entire stay because of this gentleman. He spoke excellent English and was completely accommodating – a great communicator. He definitely understood what was at stake and how much was on the line. Our driver’s name was Berwha. He did not speak English, negotiated some pretty intense mountain roads with precision and was an ace mechanic. I watched him fix our fuel pump in the middle of nowhere with silly-putty and a pair of rusty pliers. It was impressive. We also had five, non-English speaking local nomads who were already in place and scouting prior to our arrival. These guys were tough and awesome sheep hunters. I’ve hunted sheep and goats in North America maybe eight or ten times. In North America, the best guides are typically sheep and goat hunters. I’ve got to believe the same holds true in Mongolia because these guys were dialed. One recommendation I’d like to offer – bring your optics. Binos, maybe two pair, and definitely bring a spotting scope if you have one. The nomads, aren’t the kind of guys with Leica binoculars hanging off their necks or Swarovski spotting scopes in their packs. Sharing these devices with them will improve your hunt. 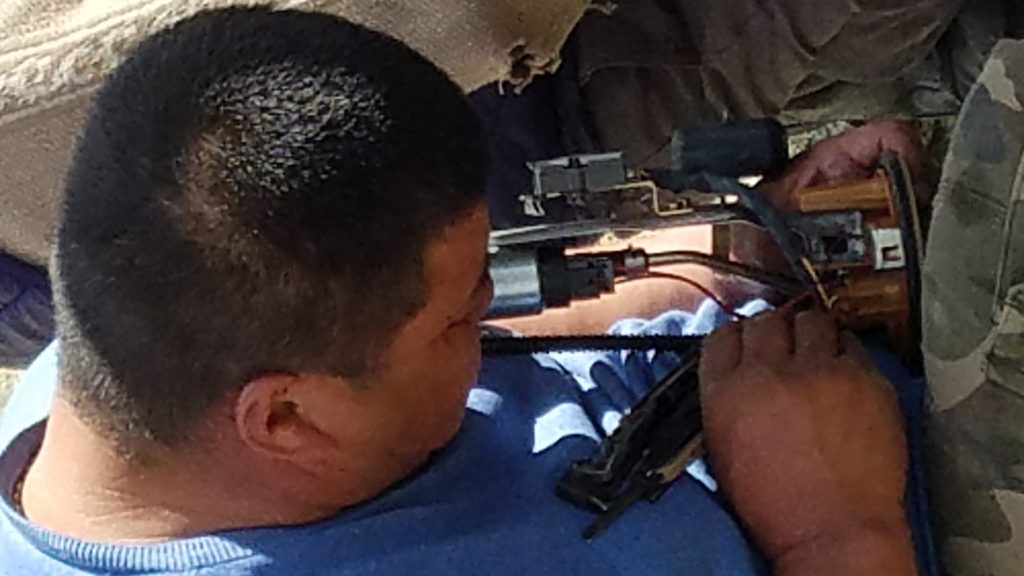 All sheep and goat hunts are tough – period. At least all the ones I’ve been on. Naturally there are different levels of toughness. On a scale of 1 to 10, and if hunting Dall sheep in Alaska’s Chugatch is a 10 and driving around on an estate in Texas is a one, I’d call the sheep portion of this trip a five and the ibex portion a six. It was bad, but not that bad. Anyone who’s in reasonable shape (you know who you are), and is willing to work their tail off, should not be afraid to attempt a week or two in the Altai.

I started hunting when I was 15 and I’m now just shy of my 46th birthday. I’ve seen a lot of amazing things in nature during this time, but nothing more impressive, nothing more “National Geographic” than the day Dan Cabela, Byassa, Berwha and I got to within 40 yards of a 57 in-a-half inch High Altai argali ram with another giant just behind him and seven more in tow.

It was an ambush situation – so actually the band came to us – which makes it even better. I’m a whitetail bow hunter, a spring turkey hunter, a duck hunter so, to me, watching an animal come into my set-up always kicks my adrenal gland into high-gear.

Here’s how it all went down: After several blown stalks, and a lot of miles hiking the Altai, it finally happened. The nomads decided they wanted to try a “push”. First of all, doing a push in this country takes time. Time to get into position. Byassa, Berwha, Dan and I hoofed-it maybe a mile to a saddle and got down on our bellies. The nomads took the high-ground, covering several different high-elevation peaks. Again, this all took time to get everyone into position in such massive country. Obviously, the rams were between us and our nomadic madmen.

Once the push started, we anticipated the band of rams coming down and then back up, crossing a face about 300 yards in front of us. That’s what we planned for anyway, but I’ll be dammed if those magnificent rams didn’t crest a little lip and end-up right in our laps, and I mean, right in our laps! It completely started me. All of the sudden, I catch a movement out of the corner of my left eye, and the band is right there! I mean right there! The two giants were in the lead followed by the seven. The minute they crested, they froze and were on us. Even though we were all on our bellies, the rams knew something was off. It was a total stand-off! Everybody and everything was frozen, even time it seemed. I seriously couldn’t believe what I was looking at, it took my breath away – these giant flaring horns with a slight breeze washing over them, sharp eyes pinning us to the earth.

Dan was on the trigger but pointed 90 degrees in the wrong direction. There was no way that any of us dared move a muscle. We had to wait for them to make the first move. It was hard to remember or understand how long the stand-off was in place during this confused and adrenaline pumping situation, but after about 30 seconds maybe – they broke! At first, it looked as if the giant lead-ram with his massive horns leading the band was going to sway the entire group right in front of Dan’s GunWerks rifle barrel, but then, the second to last ram rocked-out in the opposite direction bringing everyone with him. It was a bad deal. Now we were all scrambling, me on the camera and Dan on the gun. The rams started dropping off the edge and out of our lives one after the other. Thank the good lord the two giants were now in last place as the group fell off – one, by one, by one, by one, by one. For some unknown reason the last place ram, the giant, hesitated for a spilt-second before dropping off the earth, and Dan was able to put it on him. He pounded him with the big .30 Nitro and he fell right at the very edge just before he dropped off into oblivion. Amazing shot! It was pure silence for a few seconds as we were all trying to process this impossible image. Then … boy, we were all so happy. 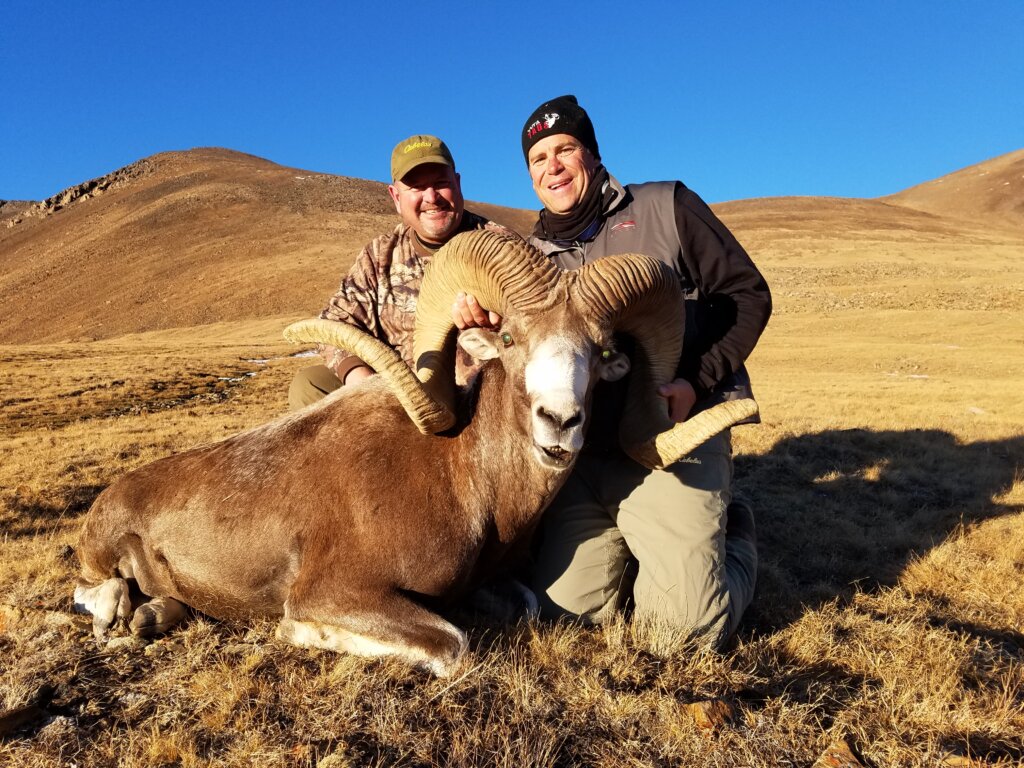 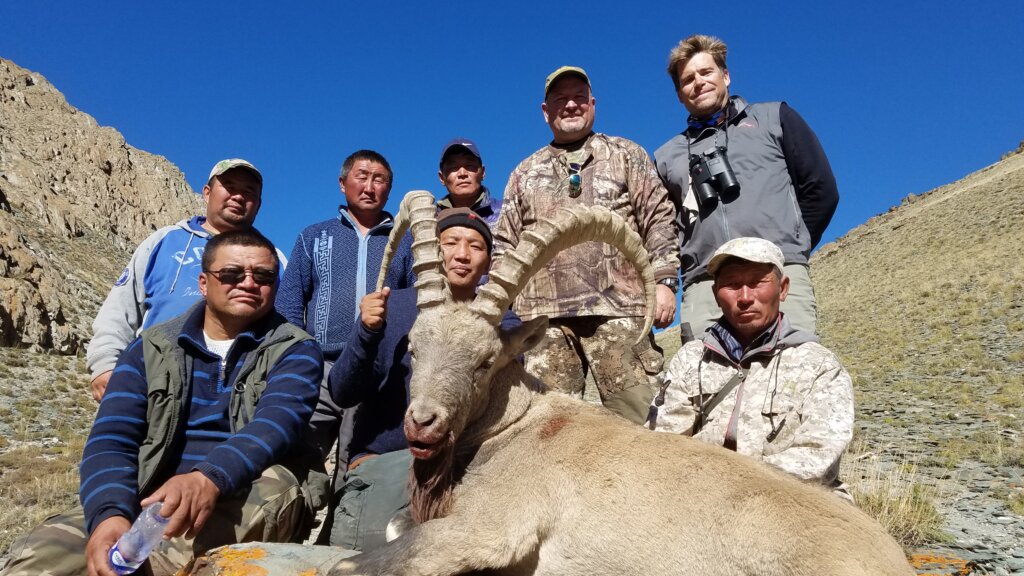 It’s pretty tough to follow that and now write about the ibex hunt. It was just kind of a normal hunt, but I’ll say this – the country those Altai ibex call home makes one feel small. They live a bit lower in elevation, but in much much rougher country, only about an hour’s drive from where the sheep live. As those ibex negotiate the cliffs and steep hills of the Altai like it’s nothing, with their sweeping horns and little bodies, it’s hard not to be impressed.

The harvest happened on the first day of pursuit. After a big hike and a failed push on a giant group of billys earlier that morning, we were able to glass a bedded group later in the day just after lunch. Again, the nomads did an amazing job of getting us into position and Dan made an awesome shot, on a beautiful a 40” billy, ending our time in the Altai.

When I reflect back, I think of giant horns in the silence of the Altai. That image will forever be burned into memory. I also think of the incredibly hard-working nomads, our ace lead guide and translator and a great client/friend to share camp with. Dan, it was a real adventure … how bout that drive to the stag/gazelle camp! Lets not tell our significant others about that one. That may end all future adventures … LOL!

I realize the High Altai argali is out of touch for most, but the Altai ibex is certainly within reach for many. It will give you a chance to experience a hunt on the Asian continent in an incredible mountain range with completely awesome people. Bring your Cliff Bars, bring your Mountain House and pack as you would for any sheep hunt in North America. Dress in layers, great boots, lots of socks, good optics etc. Americans work hard in life and as they say, you can’t take it with you. I truly believe, if you have the means, the Good Lord wants us to experience as much of his creation as possible during our brief stay on his earth. I couldn’t imagine not having a quality booking agent in your corner on any hunt, but especially on a hunt across the world. If you’re contemplating such an adventure, WTA would be happy to help – we’re just a phone call away.