The Journey Within, A Bird Hunter’s Diary- Himalayan Snowcock 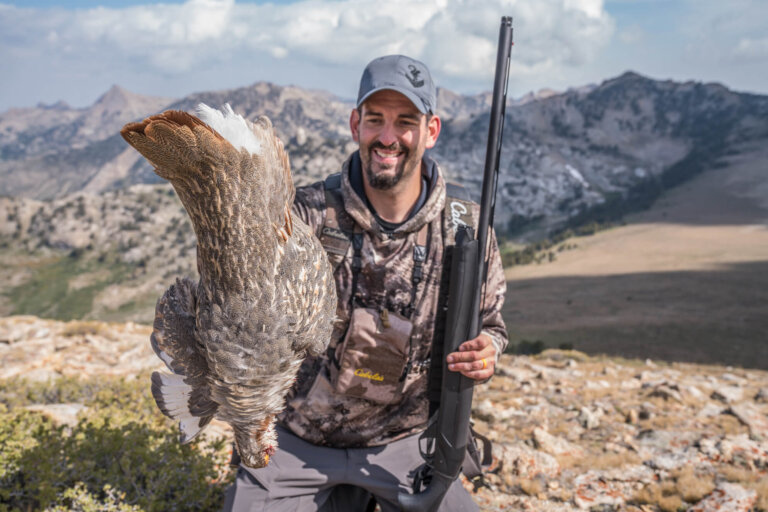 Going into this fall, the upland trip that had me the most worried, was heading into the Ruby mountains of Nevada in search of the extremely elusive Himalayan Snowcock.  Himalayan Snowcock live in high alpine meadows and cliffs generally between the elevations of 9,000 to 11,000 feet, but they are also found in their native ranges as high as 16,000 feet.  In researching and speaking with hunters who have hunted the area and gone after Himalayan Snowcock, I made the tough decision not to not bring any of my trusty Brittany’s with me. The hunt would be more of a sheep or mountain goat type hunt, rather than a traditional upland hunt.  As we rode horses into the area, it didn’t take me long to confirm that I had made the correct decision on leaving my dogs behind. 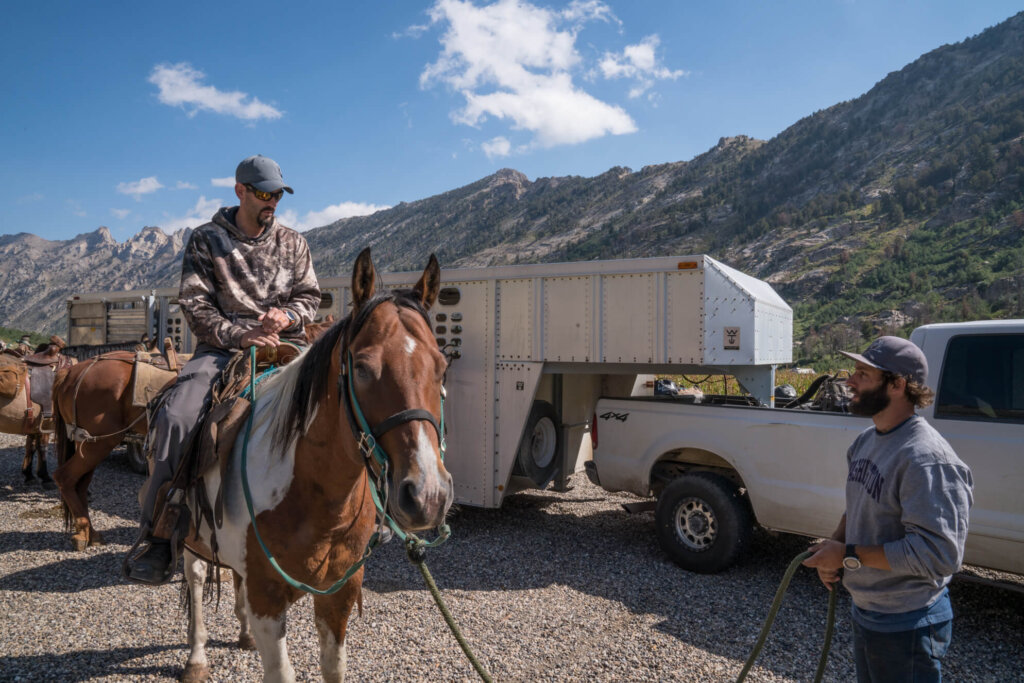 In the early 1960’s, the Nevada Division of Wildlife received a handful of Himalayan Snowcock from their home range in the Himalayan Mountains of Pakistan.  This was part of a project by the Nevada Division of Wildlife to release and establish game bird populations in areas of Nevada that, at the time, did not have any game birds in them.  This has proven to be a very successful initiative as it has also established, as well, the wild chucker populations in Nevada. The project has grown in the early days from just a handful of snowcock to now an estimated 2,500 birds that are calling the Ruby Mountains home.  This projected population is an estimation as the birds are extremely tough to see and get an accurate count on. Sightings have, however, been continuing up in the years since their introduction, which would probably mean that the population is continuing to grow.

To legally hunt these birds in Nevada is easy, as you need a general hunting license and then the Himalayan Snowcock permit, which can be easily secured online.  There is no quota on snowcock permits as the success rate on hunts is extremely low based on the home range of these birds and the difficult terrain where hunters find them.

Prior to our hunt, we made arrangements with a great outfitter from the area who uses horses to pack in.  This allowed us to go in and stay for as long as we would need to but packing in also allowed us to travel further into the Ruby Mountains to an area that isn’t as well known.  The area does not have the highest numbers of birds but did have fewer hunters and also less foot traffic from hikers. With this plan, we sacrificed the areas that had been known to have higher populations for an area that has fewer birds but hopefully less pressured birds. 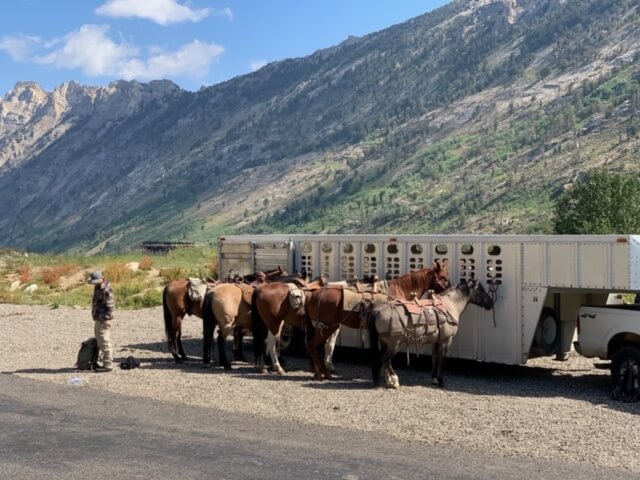 We started our trip in Elko, Nevada and we drove to the outfitter’s home.  From there we loaded up our gear and horses prior to driving to the trailhead, which was about 45 minutes away.  Once at the trailhead, Mitch (our outfitter) and Kenny (our guide) made quick work of saddling up the horses and getting everything packed that we would need for a week of hunting snowcock.  It is truly amazing to watch good horsemen do their job. At this point I could tell that Mitch spends a lot of time with his horses in the mountains and that our trip in would be a good one. Much as expected, our horseback ride into camp was uneventful, but it was through some of the most breathtaking mountains I have ever seen.   There are a lot of alpine lakes up in these mountains which makes for outstanding vistas. We arrived at our camp which consisted of a wall tent and also a pop-up tent that Grant and I would sleep in. Everything was in place so we would be comfortable, even if the temperature dipped and weather conditions worsened. 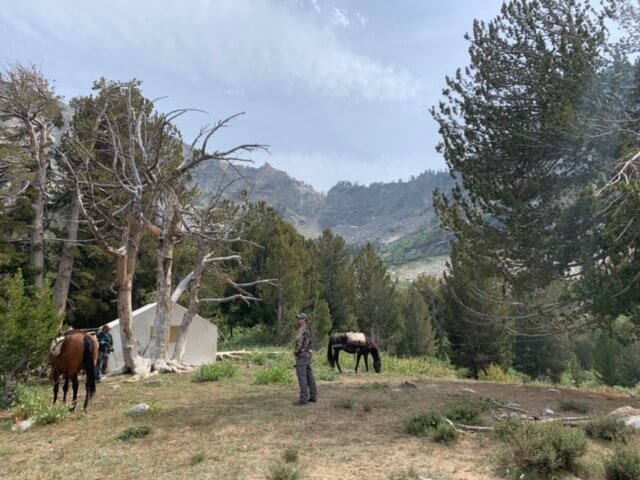 The week before we arrived was nasty with rain and high winds.  Unfortunately, the hunter who was in before us, wasn’t successful.  This is the story of the majority of snowcock hunters, as this hunt has the lowest success rates of not only upland species hunts but for any hunt in North America.  The Himalayan Snowcock hunt is truly one of the toughest hunts you can attempt. Fortunately for us, as we were packing in the weather was almost perfect. The temperature dropped as we continued into the mountains and went over the pass that opened up to the alpine valley where we would be hunting.  As we moved over the pass, we topped out at 10,800 feet and then moved down to our camp at 9,000 feet of elevation. After getting everything set up at our camp, we had about five hours before dark. In preparation for the next day’s hunt, we started to methodically glass the sides of the steep mountains surrounding our camp.  After 4 ½ hours, I would have told anyone there wasn’t a snowcock within 5 miles of us. 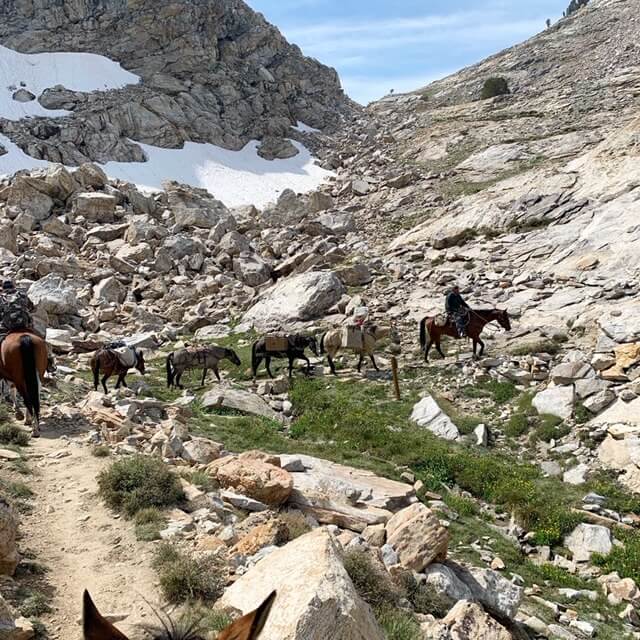 As the sun started to set behind the mountain, Mitch went into the cook tent to start on dinner. Grant and I had finishing filming for the day and were starting to pack up our equipment, when I heard it, or at least I thought I heard it.  Before the trip, I found a link online that had recorded the sound that a Himalayan Snowcock makes. I must have listened to that recording fifty times trying to engrave it into my memory, so if I heard it, I would know what it was. Then, there it was again, and I was 100% certain that Grant and I had heard a snowcock on the mountainside next to camp.  We went and got Mitch and Kenny, and everyone started glassing the mountainside around camp. Kenny spotted the snowcock on the skyline and it was a Himalayan Snowcock that was calling. Grant was able to get the snowcock on film as the sun set to darkness. We were very lucky as many people have hunted hard for a week, or more, and not even seen a snowcock.  Things were looking up for our morning hunt. 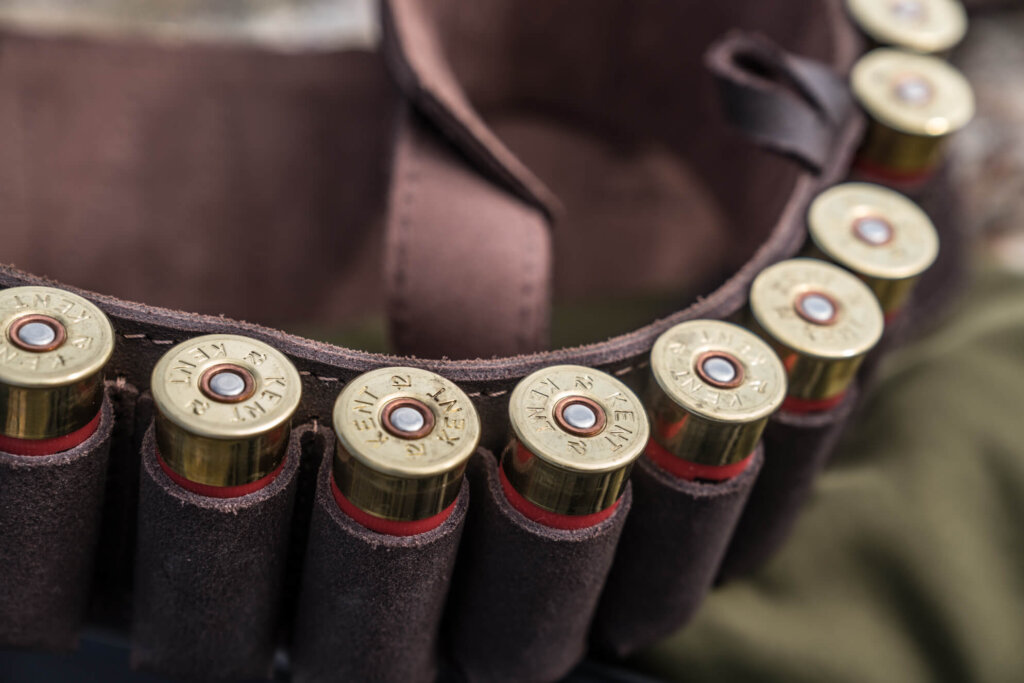 The next morning, we woke early, had breakfast of eggs and biscuits, and were outside listening as the sun started to rise.  In an odd way, I would compare the sound a snowcock makes to the sound of a turkey gobbling, as both tend to make their calling noise first thing in the morning and last thing at night.  This is their locating call for other birds and, as a hunter, we can use this to actually locate where they are hidden. The downside of a snowcock calling is that they usually follow the calling with gliding down the mountainside in search of water or food.  The glide could be as close as a couple of hundred yards to the opposite ridge or they could glide miles down the mountain to a location you could not see. However, this morning we did not hear any snowcocks calling and it seemed we were out of luck.

As we continued to glass, Kenny spotted a group of four snowcock working their way up to the skyline, but they disappeared without a sound.  Seeing snowcock is a win in itself. After about another hour of glassing and listening, we didn’t hear any snowcock. After discussion, we decided to stretch our legs and take the center rockslide up to the top of the mountain and slowly work our way from the rockslide towards the spot where we had last seen the four snowcock go over the skyline.

Once on top, there was a grassy ridge and then a cliff that was the other side of the mountain. Obviously, we couldn’t see the ridge or the other side of the mountain from camp.  According to our Gamin GPS watch, our climb up took us from 9,000 feet elevation to just under 11,000 feet. Once at the top, we caught our breath and slowly started to walk along the ridge and glass in the direction where we had last seen the snowcock.  After roughly an hour of this, we had slowly covered about a half of a mile. As we continued glassing, we all heard them at the same time. It was the sound of not one, but several snowcock on the mountain adjacent the one we were on. Glassing the area of the sounds, we spotted four snowcock on the adjacent mountain and watched as they glided a couple hundred yards down to a grassy ledge on the same mountainside and started eating. 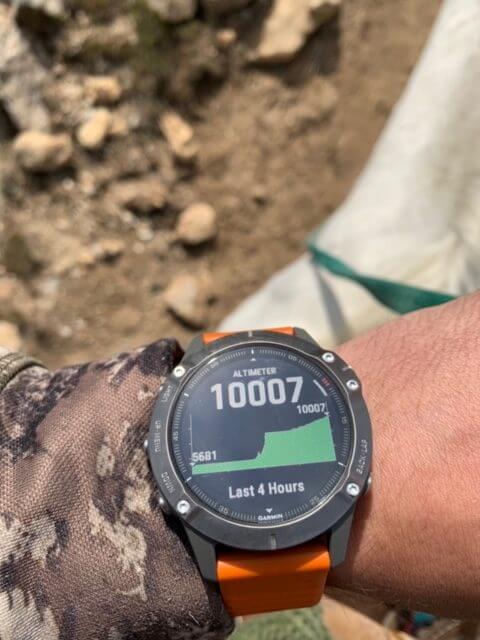 This was our chance at a snowcock, so we needed to travel as fast as we possibly could from the mountain we were on, to the mountainside they were on.  After about an hour, drenched in sweat, we reached the spot we had last seen them. We could only hope they were still eating nearby. I slipped off my pack and as we glassed, we started to slowly inch forward.  As we crested a small ridge, I looked off to my left and saw a snowcock at 75 yards gliding out of reach and he was at 500 yards in just seconds. My heart sank as I instantly thought we were too late or had made too much noise.  But, that snowcock was only one of the four we had seen. We picked up our pace and topped another small ridge and there they were; a group of three snowcocks, and they looked as surprised as we were. They all took flight at about 60 yards.  I raised my Benelli Super Black Eagle 3 on the last bird, as he was the closest. I shot. He fluttered in the air. It was a hit, but he kept going. I shot my second shell, he fluttered again, but again kept going. As I squeezed the trigger a 3rd time using my last shell, he fell from the sky. Emotions took control of all of us and they might have heard our yells in Vegas! 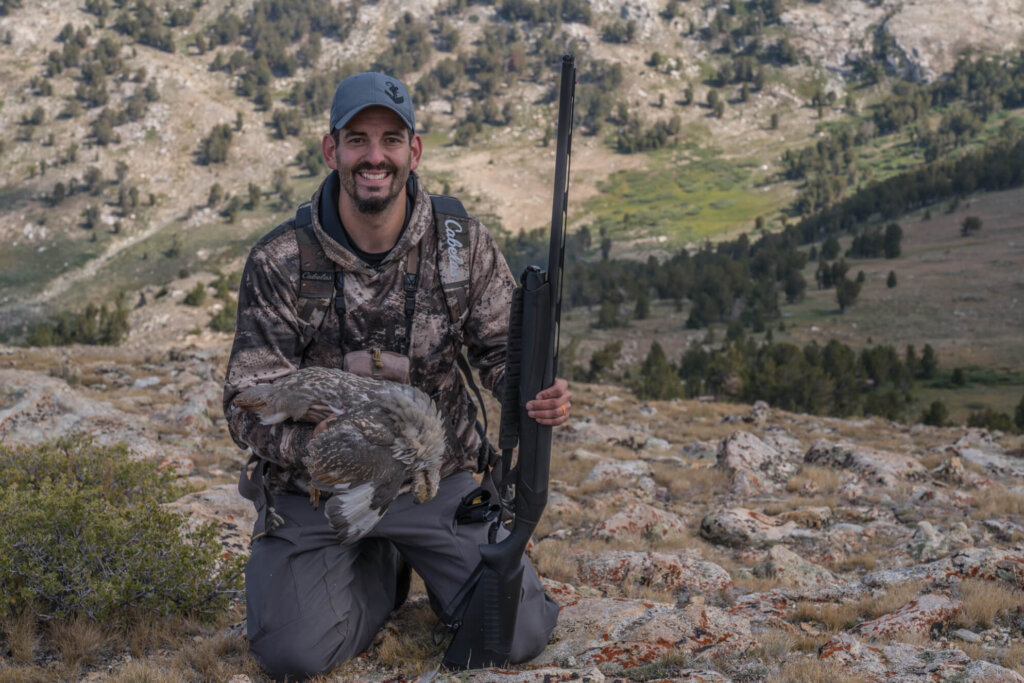 It is very difficult for me to put into words what I felt that day as we walked to the snowcock and I picked up one of the toughest and most majestic upland species in the world.  Sitting here typing this on my laptop, as we are having a weather day on our Alaskan ptarmigan hunt, still gives me goosebumps. Thanks to the Nevada Division of Wildlife; your conservation program provided me, and other hunters, with a fantastic opportunity that would not be available without your efforts.  To all diehard upland hunters, if you are looking for the adventure of a lifetime, the Himalayan Snowcock in the Ruby Mountains of Nevada, should be #1 on your bucket list.