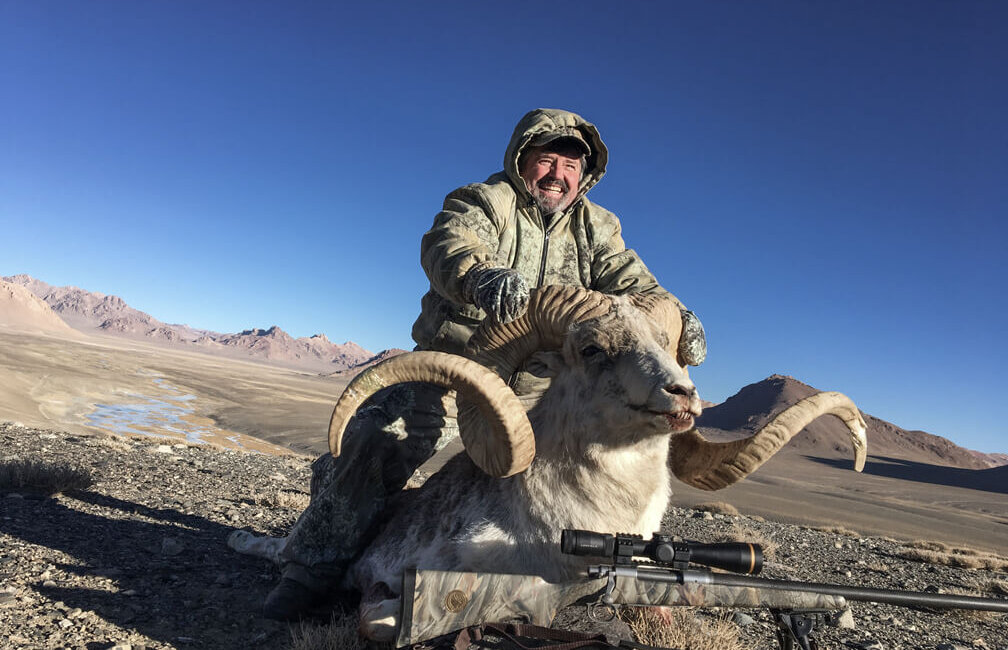 I recently had the opportunity to go on a WTA hosted hunt, with Mark Peterson, to Tajikistan in search of a Marco Polo sheep.  One would think that having my own underground 100 yard rifle range would give me an edge while hunting Marco Polo sheep, but I’m here to tell you nothing could be further from the truth.  Marco Polo shots are out there!

My Marco Polo hunt plans started when my wife saw a picture of a Marco Polo sheep in one of my magazines and said, “Why don’t you have one of these?”  My answer was, “Did you read about the cost of the hunt, the long flights and all the driving you got to do to get there?” She knew that I had seen a photo of a Marco Polo when I was 12 or 13 years old and had wanted to hunt one ever sense then.  So, my dear wife added the costs up and said “I think you need to go regardless of whatever.”   Those were her words and that was good enough for me.

I have heard about some of the horror stories told by hunters going after sheep in third world countries, and decided that I needed assistance to make my trip successful.  I called Worldwide Trophies Adventures and what an excellent decision that turned out to be. The OA staff at WTA was excited to talk to me about the trip.  They answered every question I had and knew what was going on. Then I was told that Mark will call you the next day and he did. Mark kept using the phrase “hosted hunt”, and said he was personally hosting this hunt.  Mark honestly described what would happen on his hosted hunt.  I was hooked and soon booked for the adventure of my life time.

Not long after, I received 13 pages of instructions on how to travel, what to bring and other useful information.  I started planning and putting things in order. Mark has an extremely well organized group of people at WTA who made my planning easy.   Our group, for the hosted hunt, met in Chicago and headed East on Turkish Air.  We arrived in Istanbul after a long flight and then took another flight to Dushanbe, Tajikistan.  Then it was more than a day traveling in Toyota Land Cruisers to reach our base camp.  I didn’t know what to expect, but our base camp was one of the finest I have ever been in.  We had great food and clean rooms and a friendly staff with smiles. 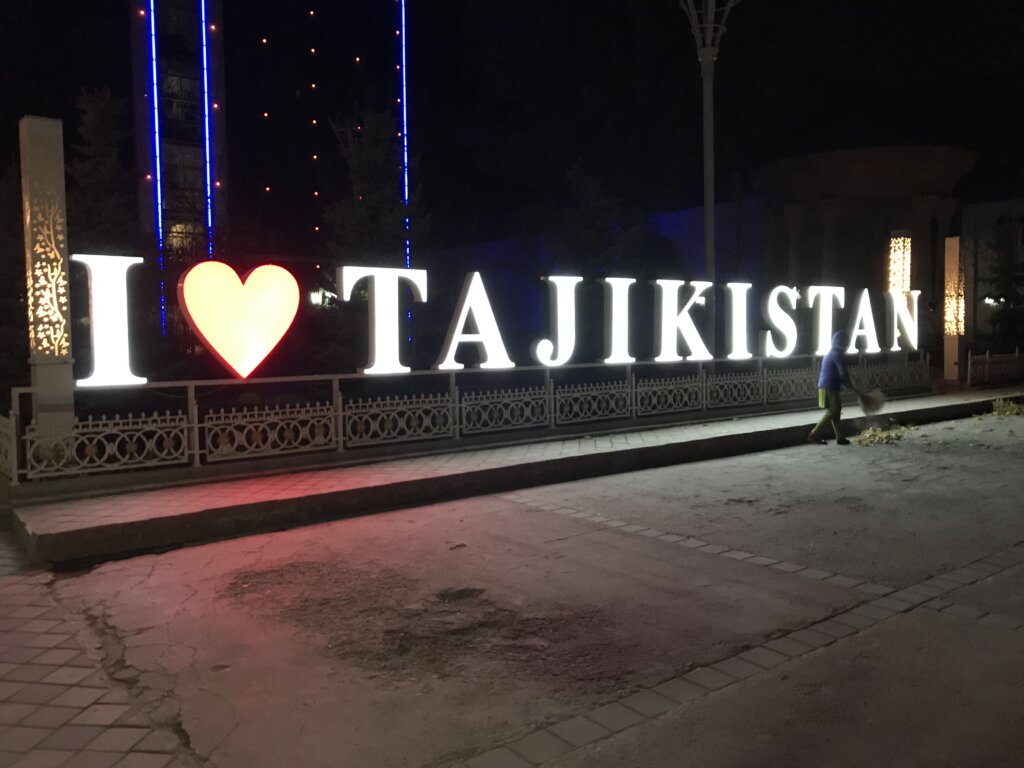 After a short first night, breakfast was at 7.  Then we went to the range to check our rifles.  The range had two-foot square steel swinging target, painted yellow, with a painted black diamond in the center.  They were at 300, 400, 500, and 600 meters, so we knew that short shots were probably not much of a possibility.

Heading out of our camp, there were Marco Polo sheep everywhere.  They were on the mountains and in the valleys.  There were herds of a few sheep and herds of several hundred. We got within several hundred yards a herd of maybe 200 or so.  My guide and the interpreter were excited about one of the rams in the group.

It was not easy trying to find that one trophy sheep out of such a large herd, but I found him in my binoculars and then in my scope. My guide and my interpreter were helping me keep on him.  Then my ram stepped left and stopped and looked down at me. They were giving me yardage as he kept climbing.   He stopped at 720 yards and I was sure glad that I practice long shots back in Idaho.  We were at the base of a hill that was so steep that my bi pods were extended all the way out and I still could not get enough lift.  I was shooting up hill at a steep angle of about 65 degrees and the wind was blowing left to right at about 50 miles an hour.  I held into the wind at what I thought was true and squeezed the trigger.  He dropped on my first shot.  I hit a little bit low in the front shoulder but he was my sheep soon after that. My guide kept saying he’s a real trophy at 60 inches plus. Later when we put the tape on him, he actually measured 61 inches.  My first day hunting Marco Polo couldn’t have gone any better.   I just can’t say enough good things about my dream team who assisted in the hunt.

On day 2 of the hunt, we were traveling and looking for Mid Asian Ibex. There are a lot of them around but they were mostly up high in the rocks.  We found this small herd of females but it also had a single dark male.  His color made him easy to track as the herd moved up the mountain.   We first saw him at 300 yards but he just kept climbing as the wind was swirled.   At 660 yards he stopped for the first time, turned left and looked straight down at me. The wind was so crazy but I thought it mostly was in my face, so I just held dead center and squeezed the trigger.  My dream team started yelling and giving me the high five.  We could see that he was hit and I figured hit hard but he never went down.  All of the Ibex ran but him and he was moving slower and slower to reach the rock ledge where he went down.  My guide and interpreter thought that he was 40 plus, but to my complete amazement he measured a full 44 inches. What an amazing Ibex he was!   What an amazing adventure it is in Tajikistan!!

The staff working at this camp were the best professionals I’ve ever seen when it comes to capping, fleshing, salting and caring for our trophies.  They are amazing to say the least.

The bottom line facts describing this amazing hunting adventure are simply this.  During my time in Tajikistan I saw over 5000 Marco Polo sheep, about 1500 Ibex, 13 wolves, 1 fox and 1 Snow Leopard.  I had a great time with the hunters assembled for Mark’s hosted hunt and made many new friends.    WTA and Mark Peterson gave me my hunt of my life time.  Integrity is the word that comes to my mind.    Putting it simply, if you are not using WTA as your outfitter, you are not using the best.

Thank you very much WTA for doing and being all that you promised! 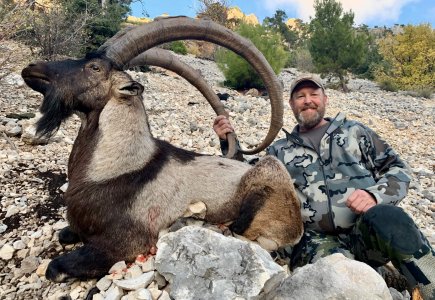 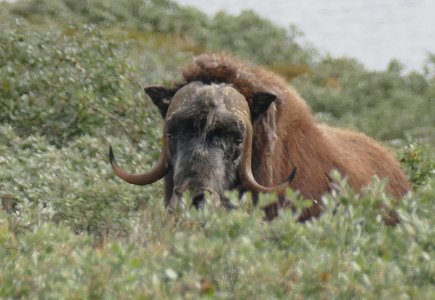