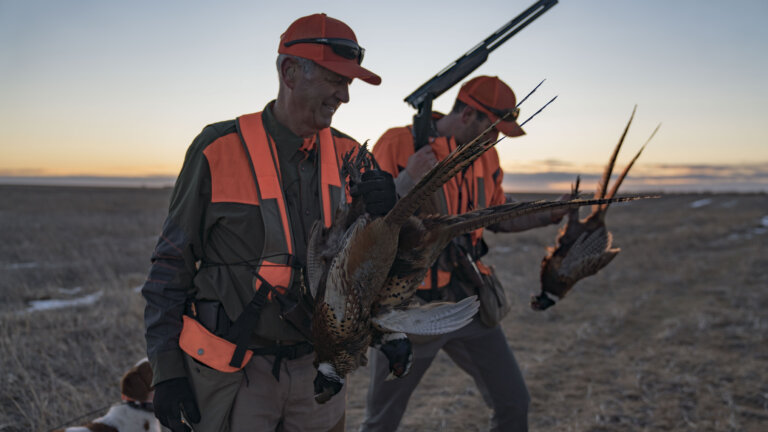 I have had many great pheasant hunts during my life, from Iowa to the Dakota’s, but when choosing a location to hunt 100% wild pheasants for my Upland Slam, I knew exactly where we would be heading.  Western Nebraska is known to have some of the best hunting there is, anywhere in America, from big game to waterfowl to upland.  Nebraska is also the location of the main office of Worldwide Trophy Adventures.  The timing of the trip was perfect as it allowed us to also join in our company’s Christmas party.

For those who do not know, WTA was previously known as Cabela’s Outdoor Adventure and TAGS service.  The majority of the WTA team members were originally Cabela’s employees and came to WTA with many years of great experience at helping hunters live out their dreams.

After another long trip from northern Oregon to western Nebraska, both the dogs and hunters were ready to get out and stretch our legs upon arrival into Sidney.  Ryan Watchorn, WTA’s CEO, was going to be our host while we were in Nebraska.  Ryan was born and raised in the Sidney area and his family roots there go back well over 100 years.  Let’s just say, Ryan knows the perfect areas to hunt pheasant.  He, and his family, also have a number of farms in the area that are managed to improve wildlife habitat. 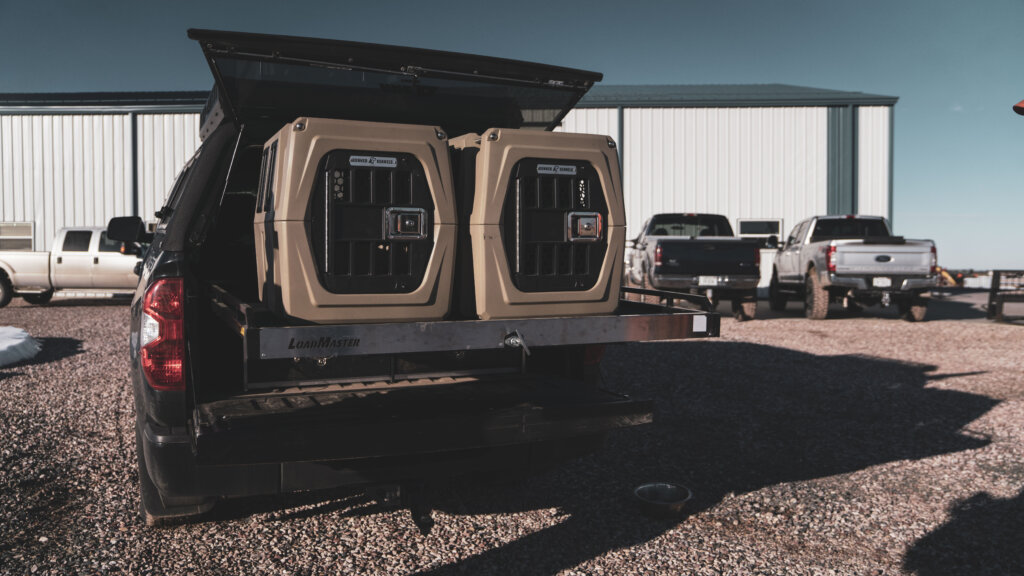 For those of you that haven’t been to western Nebraska, trees and thicker cover are generally hard to come by, especially once the crops start to be harvested.  Ryan will have us focusing on areas that have higher grass and wind block trees and are located next to cut agricultural fields.  The first field Ryan put us in, has been in his family for generations.  As we got out of the pickup trucks at the field edge, we were greeted by Ryan’s father and uncle, who are the farmers in the family.  They explained to us the work that they have done in creating habitat for all of the wildlife found on their farms.  They made the conscious effort, over at least the past 25 years, to do as much as possible to help the wildlife on their farms while still farming full force.  Instead of removing all fence rows and tree edges, they planted a combination of pines, junipers, cedars, plums, cottonwoods, Russian olives and other trees along their field edges and also in their pivot corners.  With the trees, they also planted thick prairie grasses.

In doing this, they created bedding habitat not only for upland birds, but also for all of the big game animals living in the area as well.  With the tough weather conditions in western Nebraska, it’s tough for trees to grow to maturity.   Mixing in some really bad hailstorms, it is extremely difficult for trees to get to any age or size.  It shows the habitat work they have done, as some of the trees, in the areas we were hunting, there were well over 25 feet tall.   And, the grasses were thick and lush.  The week prior to our arrival had brought a major snowstorm.  Much had melted off, but we could see, on the snow drifts still there, numerous peasant tracks going in and out of the thick areas from the agricultural fields.  I expected the intensity would soon increase once our dogs were out of their boxes. 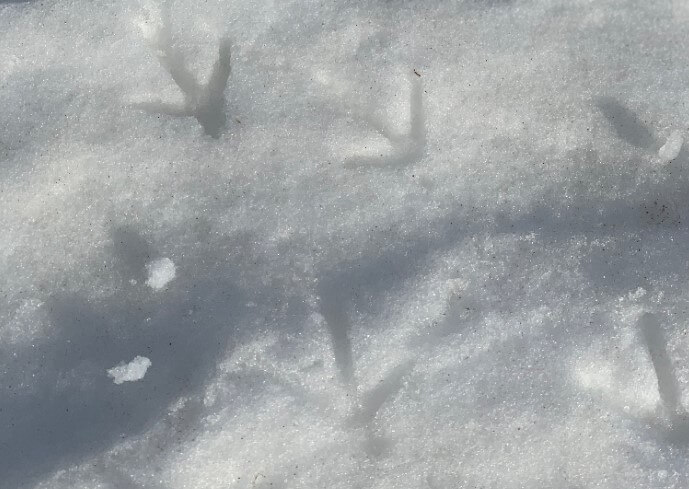 The first area we would be hunting was about 75 yards wide, so we decided to hunt Tiny and Arrow as they would work close when we wanted them to. As we started walking in, both dogs went on point on separate birds. I could tell from the look on Arrow face that there was scent everywhere.  Looking ahead, pheasants were running like crazy.  The plan for the runners was to hopefully catch them at the end where the cut field started.  We continued slowly with the hope that there would be a few birds hunkered down instead of running.  Arrow locked up again at a mere 15 yards in front of me.  He was rock solid on a small bunch of thick grass.  I moved in, and what happened next was the picture that every bird hunter has dreams about.  A giant, long tailed rooster exploded from the thick grass with the sunlight just perfect, showing all of his bright colors, and then he gave me a quartering away shot.  I raised my over under Benelli 828U shotgun, slightly leading the rooster, and squeezed the trigger and he fell.  Arrow was quick on the retrieve.  No matter how much I hunt, or how many roosters I’ve shot, there is nothing like watching a great bird dog retrieve a rooster with its long tail feathers sticking out of one side of the mouth and the bright head out of the other.

The next 45 minutes was, hands down, the best pheasant hunting I’ve ever experienced.  The work that the Watchorn family had done in building up the habitat had led to, what must have been, hundreds of pheasants in this field edge.  Arrow and Tiny had more points than we could count, and their level of excitement was off the charts.  As Dad and I walked away from the field, we both had our limit of roosters in our vests and two happy gun dogs walking alongside of us. 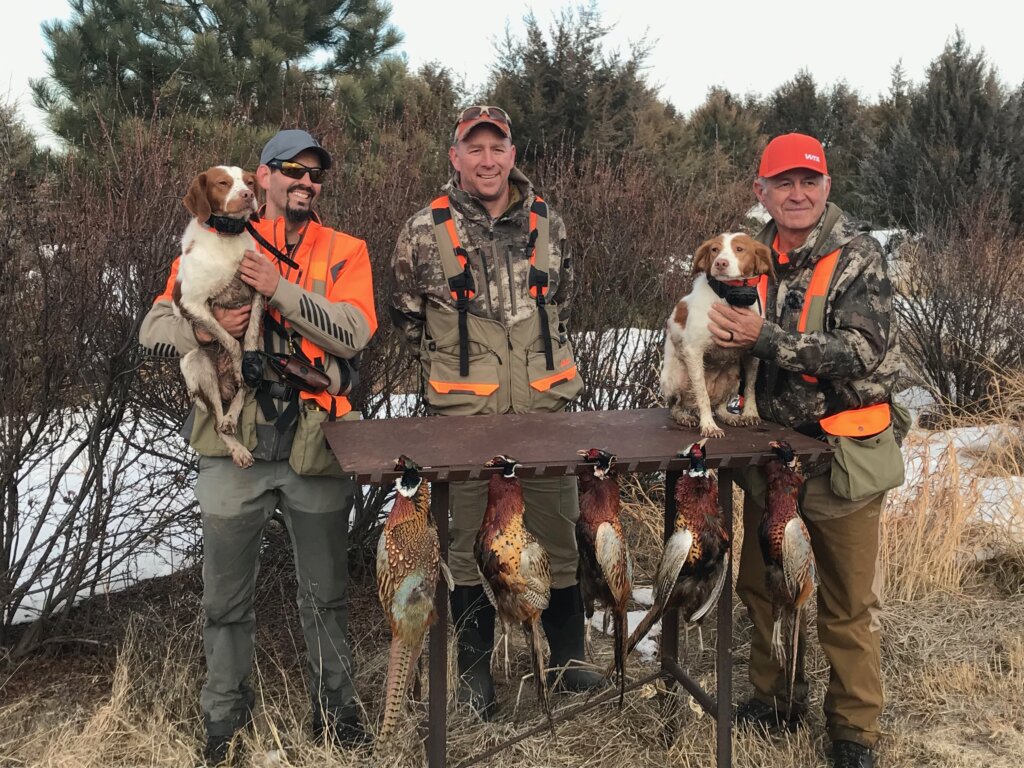 That night we joined the WTA team for the Christmas party. I talk by phone and email the team often, but it was great spending time with them, in person, at this special occasion.  I am so proud to work with the WTA team.  For companies in our space, they are definitely the most skilled, knowledgeable and dedicated team out there.  If you haven’t had the opportunity to work with WTA, give this great team a call.

The next day, we focused on hunting some larger grass fields next to cut agricultural fields.  These fields are on a rotation and in certain areas, in an effort to support wildlife, the grass was left uncut this year. These were larger fields, so we decided to start with Arrow and Shooter, as they can efficiently cover ground.  Once in the field, the dogs instantly got birdy.   It wasn’t long before Shooter locked up and Arrow honored.  I walked up to the points, but the pheasant was running. I released both dogs and watched them work the scent cone and they quickly pointed again, about 50 yards down field.   I walked up, and again the pheasant ran.  I released the dogs again; watching them work the scent cone simply made my day.  Arrow and Shooter were working perfect together and honoring each other.  As a bird hunter, this was the real enjoyment, watching great dogs work.  We continued this same routine for another 500 yards, and again both dogs locked up.  This time, however, as I walked in, a giant rooster took to flight.  Everything played out perfectly and I followed with a good shot.  I could not have been prouder of my dogs than after their work on that bird.

We continued the rest of the morning.  The birds were many and the great dog work was extraordinary.  We ended our hunt right after lunch time, with another limit of roosters.  The habitat and conservation work that the Watchorn’s have done is amazing.  They are the reason for the increased pheasant populations in the area.  Ryan, thanks for inviting us out!  Dad and I look forward to hunting with you, and your family, again in the future.

That night we loaded up our trucks for an early morning departure.  We have one more stop on this leg of our journey for the Upland Slam.  We are driving to north central Kansas to hunt wild bobwhite quail.  After quail, we have a long drive back to Christmas in Michigan.