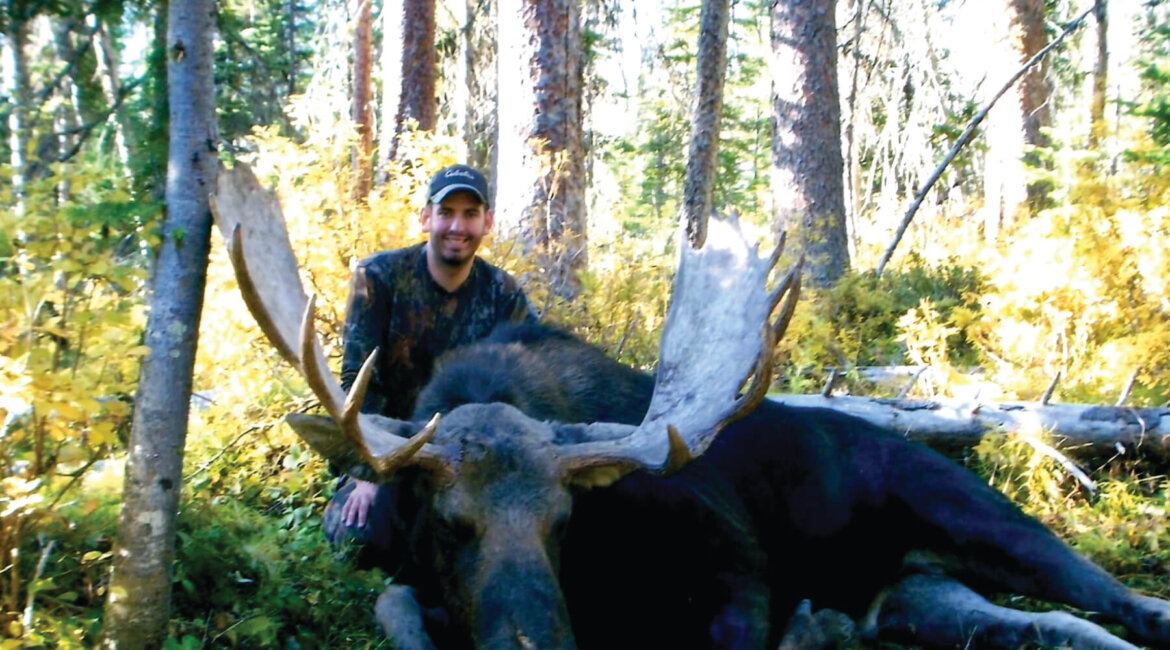 The Shiras moose may be the smallest bodied and antlered moose there is, but it has a special appeal, as it is the only moose that is found in the western US, south of Alaska.  Shiras moose are found in British Columbia, Alberta, Washington, Idaho, Montana, Wyoming, and Utah.  Drawing a tag to hunt a Shiras moose is very similar to drawing a sheep tag.  Both are very prestigious North American species and in most cases, drawing a tag is a once-in-a-lifetime occurrence.

As luck would have it, one of the very first tags I drew was a Shiras moose tag in Idaho.  This was back in 2006 and at the time I was using Cabela’s TAGS for my applications, which is now WTA TAGS.  Eric Pawlac was my TAGS consultant then and still is today.  I remember Eric giving me the call and letting me know I drew. It was like I won the lottery, which in a way I did.  Upon drawing, Eric got me set up with a great outfitter in Idaho and my hunt was booked for late September.  It was a horseback hunt.  This was great as it allowed us to get back into the mountains, away from everything, in the hopes of finding a big bull.

The weather that September was extremely hot.  The bulls should have been rutting but it was obvious, after the first couple of days, the rut was not on.  The area we were hunting was extremely dense.  We would try to get up high and glass but there were only a few open meadows that we could actually glass into.  Everything else was thick alders and pines.   Although the hunt started off slow, we did see some good moose sign and that was encouraging.

As the days started to pass, and the weather stayed warm, my hopes started to drop.  I was actually starting to plan a return trip in a couple of weeks, with the thought of coming back when the warm weather broke and the bulls would be in rut.  But like any hunt with ups and downs, after we finished glassing on day four and made our way back to camp, we noticed a change in wind direction.  At camp that night, we could sense the weather was changing.  When we woke up the next morning, there was a chill in the air for the first time.  I stepped out of the tent and saw frost on the ground.  This was the break we needed.  I was eager to be out and start hunting.

As we were riding our horses out from camp to the mountain where we had been glassing, we decided to do a quick stop at the biggest meadow nearby to check if there were any fresh moose tracks or sign.  As we cleared the thick brush for the meadow, we saw a group of elk on the other side.  We got off our horses to sneak up and take a look, with our bino’s, to see what was in the group.  As we made our way to the edge of the meadow, we looked down and saw two sets of fresh moose tracks.  It appeared to be a bull and a cow, and from the freshness of the tracks, it looked like they had come through the night before.  We had an instant change of plans.  We had come in on the downwind side of the meadow, so we choose to stalk and call on the outer edge moving into the wind.  It was our hope to call the bull out of the thick, or at least get him to answer so we knew where he was. We took it slow and steady and called all along the side of the meadow.  Four hours later, we had reached the other side and had nothing to show for it.

We reached a spot where the meadow ended and there was about 50 yards of thickness before it came to a steep drop off of the mountain.  I still remember thinking how cool the area was with a meadow on the side of the mountain.  We decided to take a quick lunch break and rest for a few minutes before heading back to the horses.  It was our plan to get up to our glassing knob and spend the rest of the day there.  As I sat and finished my sandwich, I settled down and closed my eyes for a few minutes.  I thought to myself “I must be crazy.”  “I’m dreaming that I hear a moose grunt.”  On the second grunt I jumped up at the same time my guide did.  There was a bull moose coming in, and judging from the sound he was close.  I grabbed my gun and we tucked behind a blown over aspen.  My guide gave one response grunt and that was all it took.  In less than a minute, a big bull was grunting and staggering in at a distance of less than 60 yards.  The area was thick, but he walked right into the one opening we had.  A single well placed shot, and my big Shiras moose was down.  I remember us jumping and going crazy.  I’m constantly reminded that while hunting, things change quickly.

My bull ended up being the only moose I saw on the entire trip, but what a bull he was.  It was an amazing trip and a memory I will never forget.

I am still applying for Shiras moose today, with the hopes of drawing a archery tag.  When I broke down what states to apply in with Eric, it is pretty simple- Idaho, Colorado, Wyoming, and Montana.   I currently apply in all four states.  And, I have my fingers crossed, every time the draws are announced.