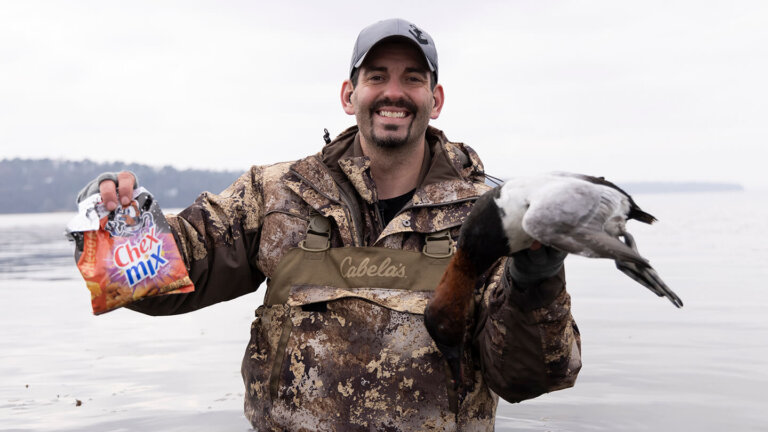 For most hunters, the King Eider is the last (or close to it) species sought in a lifetime quest for all of the waterfowl species. There is no way to describe a King Eider hunt other than brutal with extreme cold, strong winds, rough water, and no guarantees. The King Eider is a different animal and can be one of the more difficult game species to hunt worldwide. I wanted to be on Saint Paul Island so badly. My Waterfowl Slam depended on taking this bird, and the King Eider was without a doubt the toughest of the twelve species I had left to take. I knew I could fight through the extreme weather, and if given the opportunity, make the tough shot. Without a hunt on Saint Paul Island, my chances of harvesting all forty-three species in the North American Waterfowl Slam were not good. I honestly felt like this was the make-or-break moment of my entire quest. Unfortunately, Saint Paul Island remained closed due to COVID, and I had to find an alternate location and species to target.

With twelve species needed, I went to work on another plan. We decided my best Canvasback option was Lake Seminole in southwest Georgia. On January 11 we landed, met our outfitter, Justin, and headed to one of his family’s properties. Justin works as a fishing guide out of Tallahassee for most of the year, but has a passion for hunting Canvasbacks—or “The King,” as he likes to call them. He does all his Canvasback hunting on Lake Seminole. For unknown reasons, thousands and thousands of Canvasback ducks concentrate on Lake Seminole during the late fall and early winter, making it a hotspot for waterfowl hunters. Check in with WTA if you’d like to go on a Canvasback hunt in southwest Georgia. The outfitters they work with down there are phenomenal, and the waterfowl action is intense! 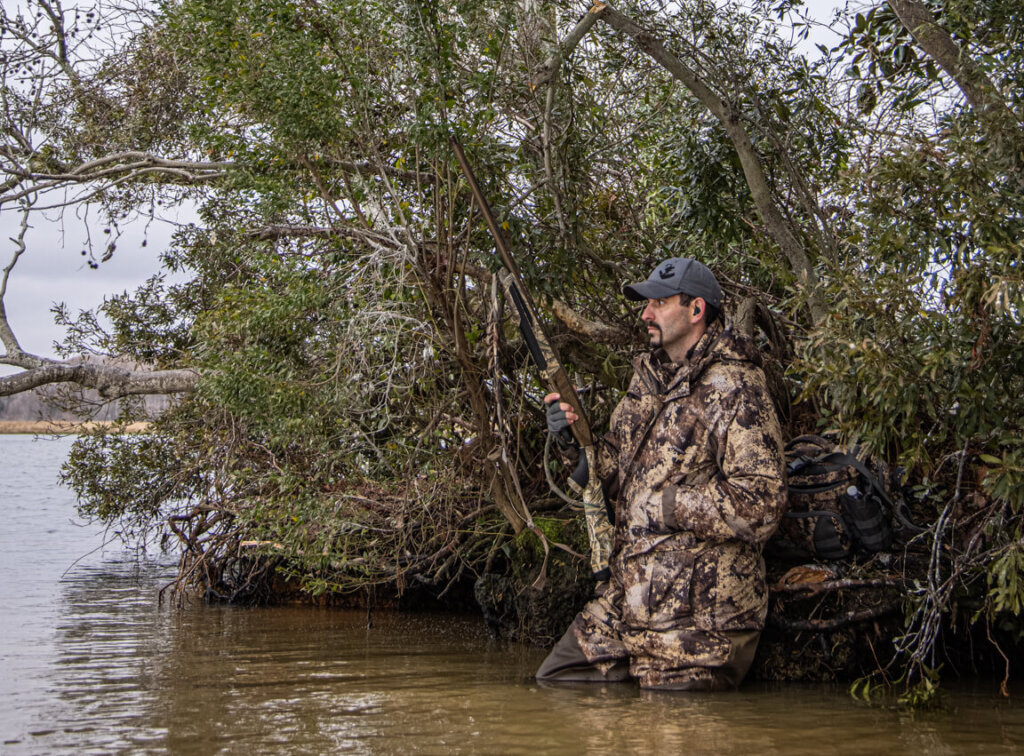 Our first morning there, we set up on a small island and put out a long string of fifteen to twenty Canvasback decoys. I hid in brush in about two and a half feet of water with my back against the bank. The brush was thick enough to provide excellent overhead cover. It was an overcast day, which wasn’t ideal. The ducks fly high, and sunlight makes the decoys’ white bodies really stand out so they’re easily visible to overhead waterfowl. We watched hundreds of Canvasbacks fly high above us, but none took an interest in our spread. After around five hours with no action, Justin came to see how we were doing and if we needed anything. While he visited with us, and probably to assure us that Canvasbacks do come to this spot, he pulled out his phone to show us a video of ducks landing in the exact spot we were standing. We gathered to watch the video—I sat my shotgun down. You can imagine what happened next. Two Canvasbacks attempted to land in our decoys—and there was absolutely nothing I could do. They saw us and flared. Speechless and birdless, we stood there and watched them fly away. No shots. No video. No photos. If only someone could have captured the look on all of our faces! 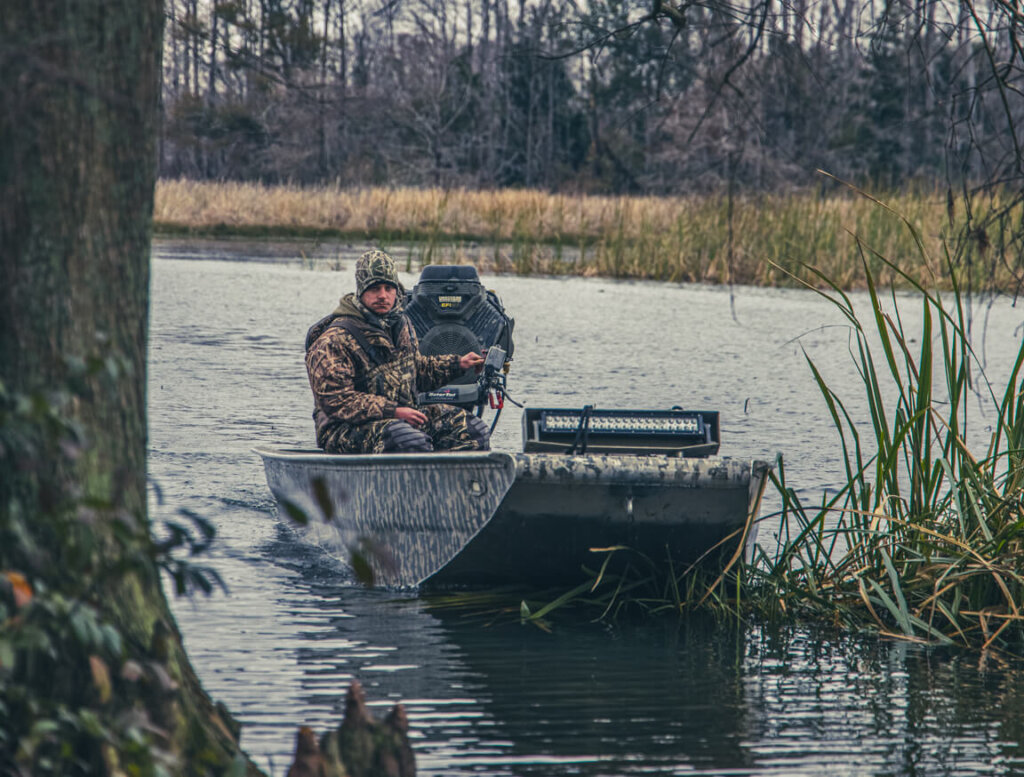 We spent the remainder of the day hunting and refrained from watching any more videos. Hundreds of Canvasbacks flew high overhead. By the end of shooting light, the only ducks that came within range that entire day were the two we were not prepared for.

Since Lake Seminole would be my best chance to get a Canvasback, I made the decision that night that we were staying until I shot one. I was not going to let a Canvasback beat me on my way to the Slam—maybe a King Eider, but not a Canvasback. I’d never forgive myself if I took every other species and a pesky Canvasback was the sole reason I didn’t accomplish the North American Waterfowl Slam in a single season. 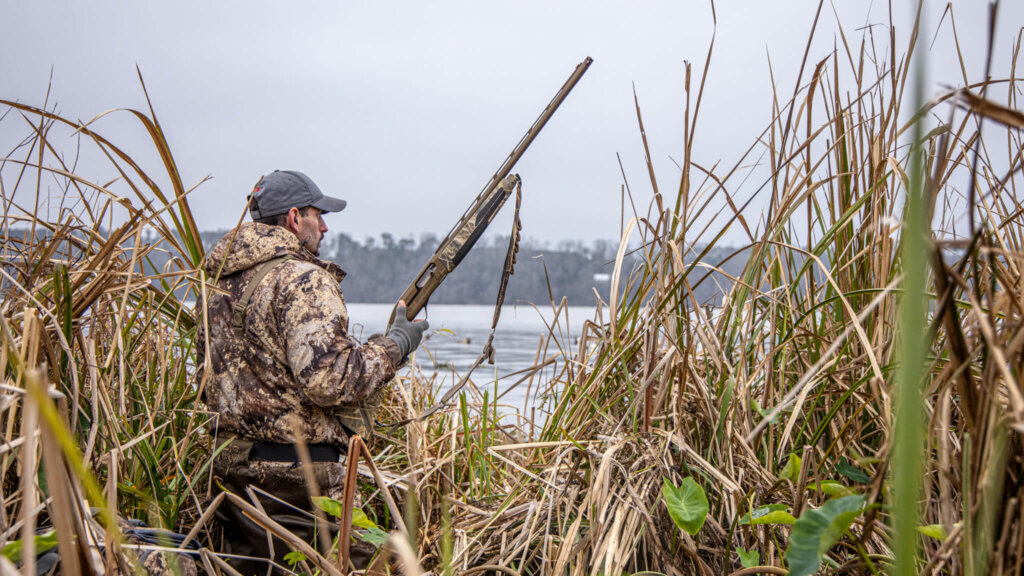 We moved about half a mile farther up the lake so we would be closer to where we suspected the Canvasbacks were eating. We set up in patches of high, thick switch grass and had our decoys out in front of us. The cover was excellent, but the Canvasbacks were still too high and continued to fly out over deeper water. At 11:30 that morning, not a single Canvasback had come close to us, so Justin made the decision that we needed to change up our plan and move out to deeper water.

Justin grabbed some bamboo poles that were about ten feet long and loaded them—and us—in his boat. He took us out to a sand bar. We pushed the bamboo poles into the sand to use as our blind. It was actually quite ingenious, as it looked very natural and put us right where the action was. We set up our decoy spread and were ready to hunt. I hopped out into water that was only an inch or two from going into my waders. 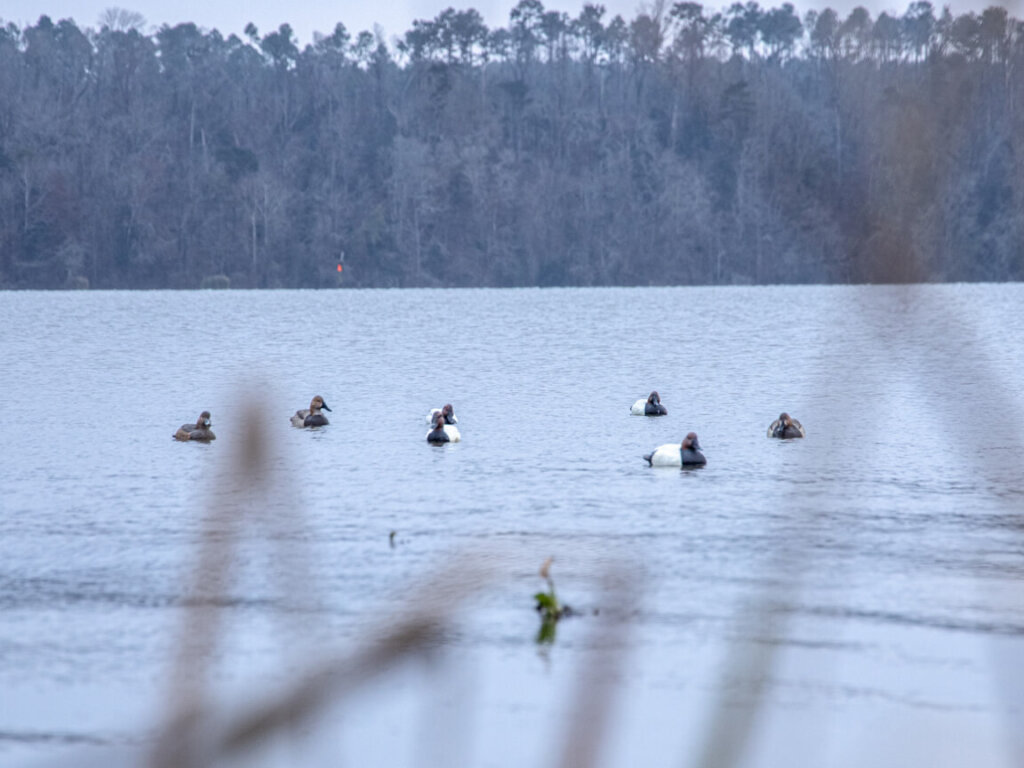 Being a bit hungry and having missed lunch, I dug out some cheddar Chex Mix from the upper-inside pocket of my waders. I had the Chex Mix in one hand and, due to the water depth, held my Browning across my shoulder with the other hand. Wouldn’t you know it—in that moment, here comes a group of five or six Canvasbacks. They saw us and flared. I dropped my Chex Mix, got my shotgun to my shoulder, picked out a bull Canvasback, and shot. I hit him and he fluttered. I shot again and hit him a second time. Third time’s the charm—I hit him with shot number three and knew he was hit hard and would be going down. We went out in the boat and retrieved an absolutely gorgeous bull Canvasback. I had number thirty-two in the boat. Justin’s bamboo blind was the winner! 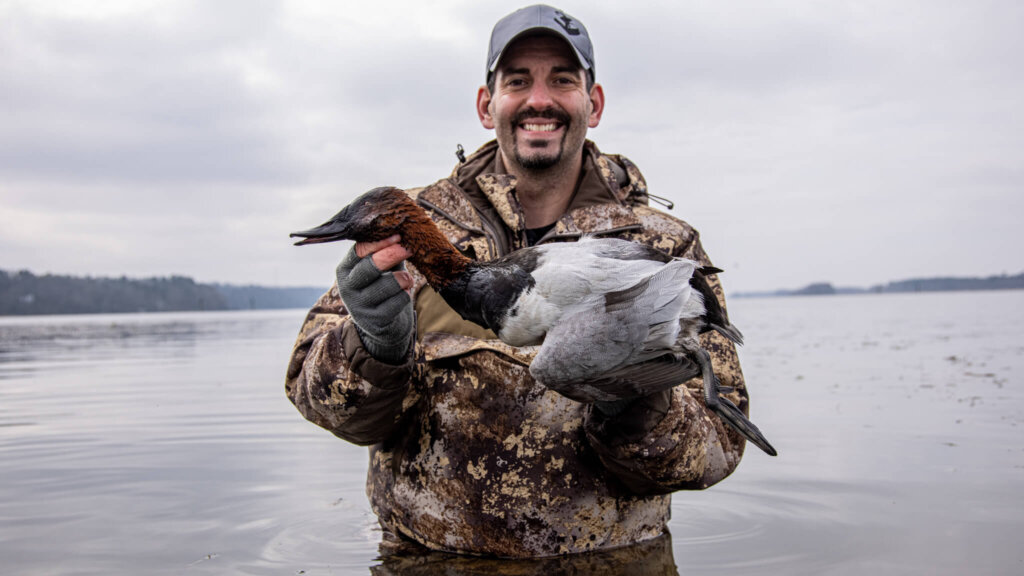 I was more than happy with my single bull Canvasback and elected to pass on trying for a limit. We had too many challenges ahead to go after a second one. I was appreciative that Justin made a spot for me to hunt in his jam-packed schedule. Although number thirty-two wasn’t the King Eider I’d originally planned to hunt during that time, I was relieved that a Canvasback wouldn’t be the bird that derailed my Slam. We hit the road for Florida in search of a Wood Duck. That is, unless I got the call that a King Eider had been spotted somewhere I could hunt. 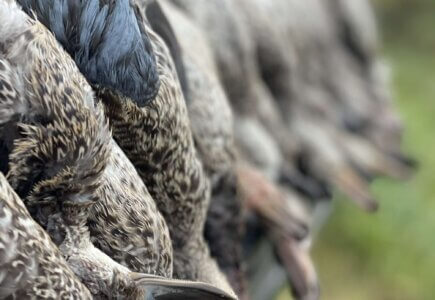 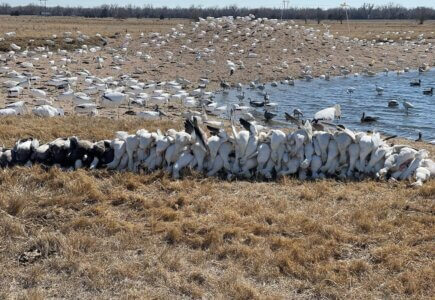 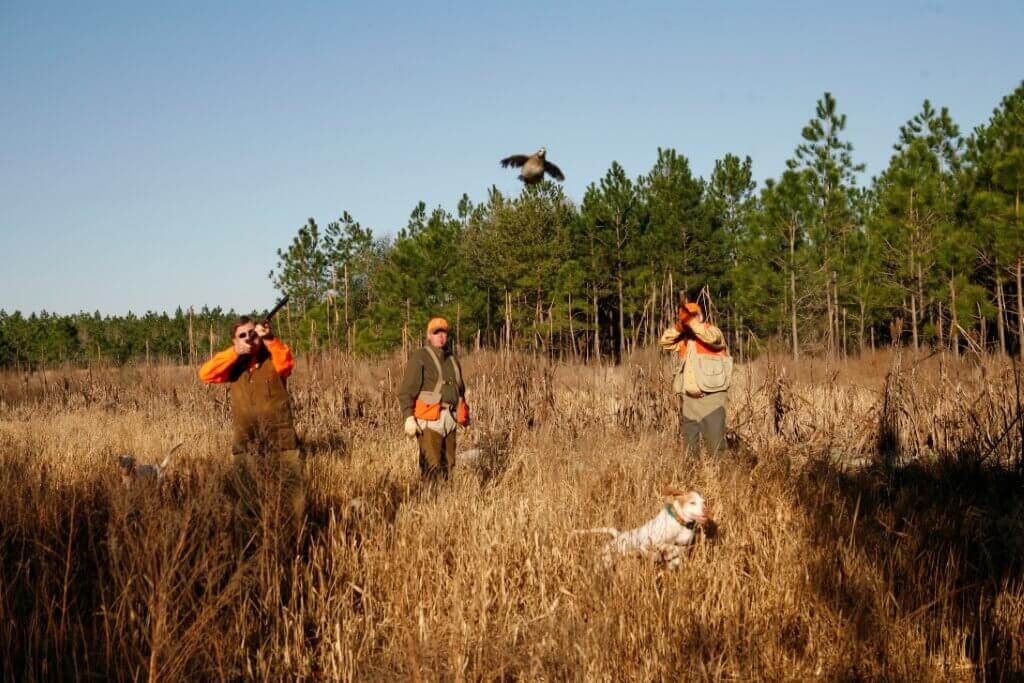 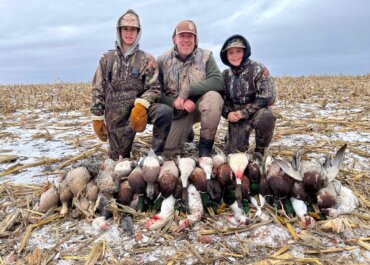 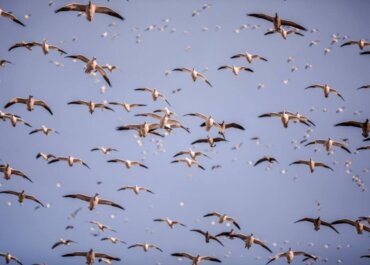 In 1999, the Light Goose Conservation Order was issued to reduce the population of light geese because of concerns about…