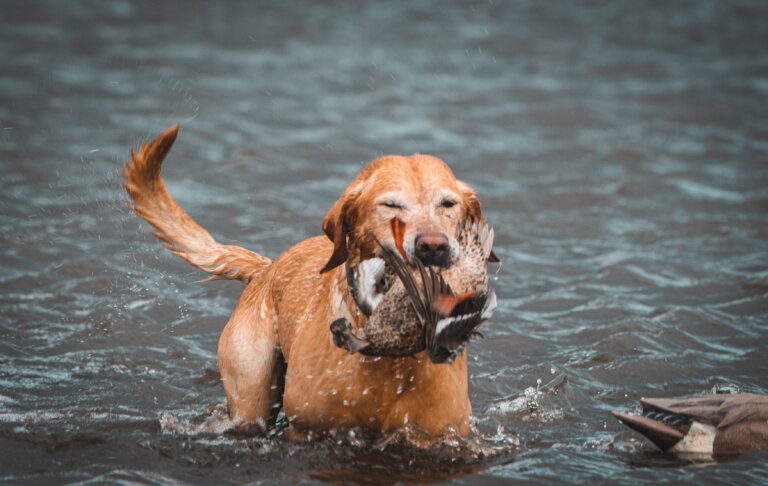 The logical route to a successful single-season Waterfowl Slam would have us starting our hunts in Canada. Unfortunately, there was zero access to the Canadian hunting areas due to COVID restrictions. I collaborated with my team at Worldwide Trophy Adventures (WTA), and we decided to head farther north in the United States and begin this challenge in Cold Bay, Alaska. We chose Cold Bay as our starting point because it is an early-season melting pot for numerous species of ducks and geese. This area had the potential to successfully hunt several birds necessary in my quest for the forty-three. 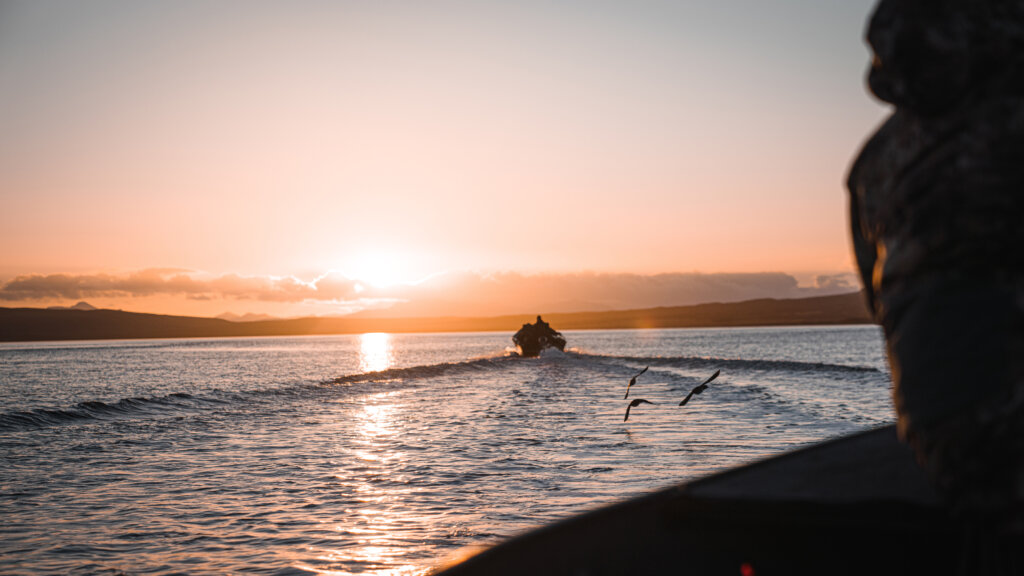 Cold Bay is located at the tip of the Alaska Peninsula, 634 miles from Anchorage, and is in the Alaska State Borough named Aleutians East. If you continue west from Cold Bay, the nearby islands stretching into the Pacific are the Aleutians. The adjoining 498,000-acre Izembek National Wildlife Refuge is home to Cackling (Taverner’s) Geese, Pacific Black Brant, and hundreds of thousands of ducks and shore birds. Our primary target was a Cackling Goose. At the time, Cold Bay was the only location on our hunting itinerary where these birds were located. Another species I hoped to harvest in Cold Bay was the Greater Scaup. These birds are hard to find and this region provides one of the better opportunities to harvest one. Unlike the Cackling Goose, however, Greater Scaup can be found in other locations we planned to hunt.

Unfortunately, a week before Dad and I arrived, a severe cold spell and storm swept through the region. This pushed a large population of the birds south along the Pacific Flyway and out of the Cold Bay area.

Our first morning there, Dad and I were up for an early breakfast. Jeff has a permit to take hunters into the Izembek National Wildlife Refuge. We left the lodge in darkness so we could be at the refuge’s boat launch by sunrise. The weather was sunny with almost no wind—certainly not ideal waterfowl conditions. We set up on a relatively narrow back channel and put out a small spread of decoys. The first two ducks I took were both drake Aleutian Green-winged Teal. These were “bonus” ducks, as I had not included the Aleutian subspecies of Green-winged Teal in my forty-three.

After surveying the channel and landscape during the morning hunt, we decided on a nearby spot to try an afternoon hunt. We set up in the tundra about 150 yards behind our earlier spot. We used goose windsocks at this location. The bright sunshine did us zero favors, as reflections off the windsocks caused most waterfowl to flare before they came into shooting range. Bright sunlight in Cold Bay was an unexpected hindrance. It’s usually not a problem for hunters, as the area holds the record for being the most overcast community in the US. Cold Bay averages 310 days per year without any sunshine. Although it wasn’t an action-packed afternoon, we were able to take several Cackling (Taverner’s) Geese. I had achieved my primary goal with success on the Cackling Geese. It was a great feeling, because this was our best opportunity to harvest this species. If we hadn’t connected on them here, our other options were not promising and probably would have forced us to add an additional trip to our already busy schedule. 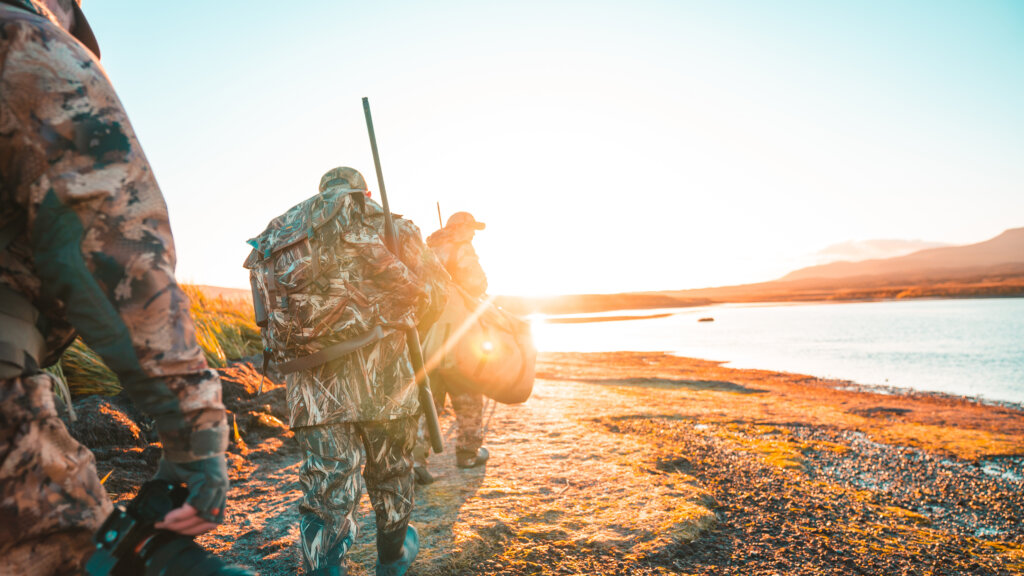 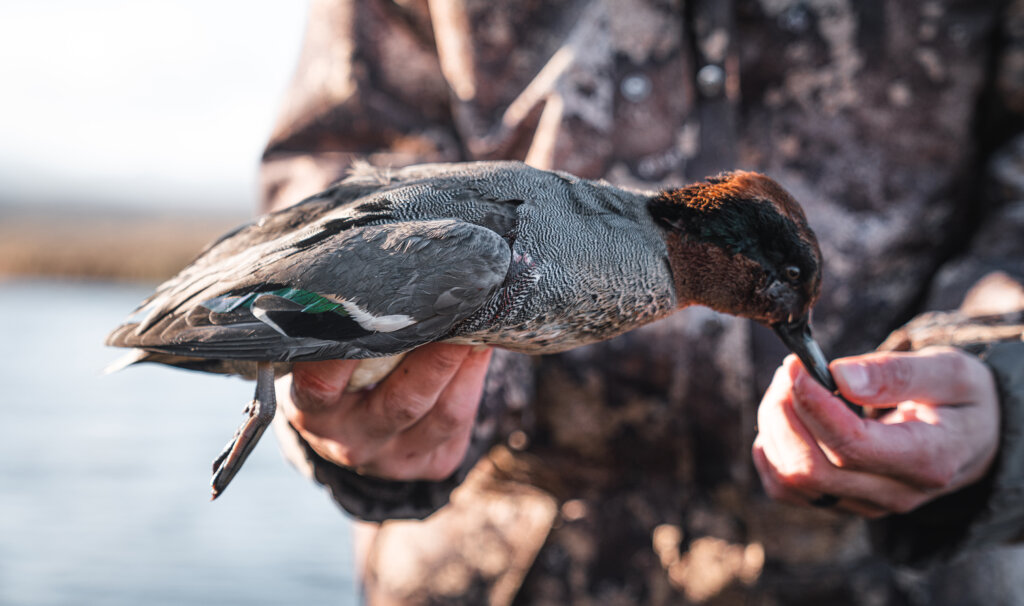 The next day was again sunny with limited wind. Not ideal conditions for hunting waterfowl, but as you’ll see, we experienced a lot of excitement. We set up on a shoreline to hunt the tastiest waterfowl in my opinion—Pacific Brant. I always enjoy eating the brant I harvest and looked forward to having them for dinner that night. We saw thousands of Pacific Brant in the air, moving in and out of the various bays, but couldn’t get any to come into shooting range. Although a couple Cackling Geese came within range, our shots were extremely limited. We’d have to wait until another day to enjoy a brant dinner. 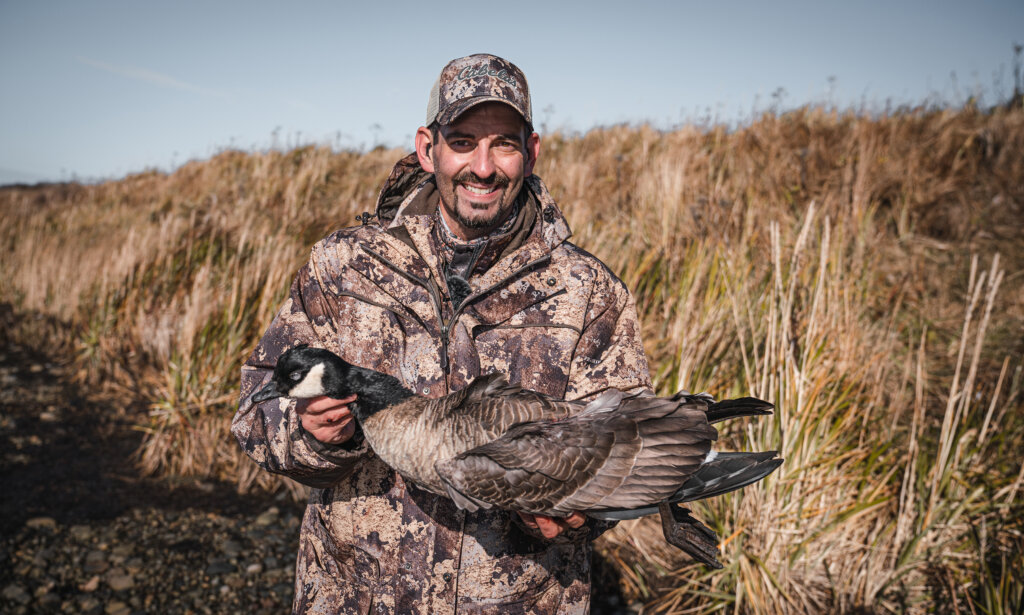 The lack of excitement from shooting was more than made up for because of the area’s wildlife and our ever-changing earth. We had multiple curious brown bears come and check us out. The spring’s COVID lockdown limited hunting pressure, resulting in the bears feeling more comfortable around the town and humans. During our hunt in Cold Bay, several times a day we would have to shout at them, and occasionally fire our shotguns in the air, to get them to move away from us.

Just before noon, we were sitting on the shore with our backs against a three-foot berm when the ground started to shake. I looked behind us, expecting to see a charging brown bear. Oddly enough, no bear, or any other large mammal, was in sight. Instead, an entirely new experience for us Michigan boys was shaking the ground beneath our feet—a 7.5-magnitude earthquake. I will say, I was relieved a bear wasn’t charging. I’d also be perfectly content living the remainder of my life without experiencing another earthquake. 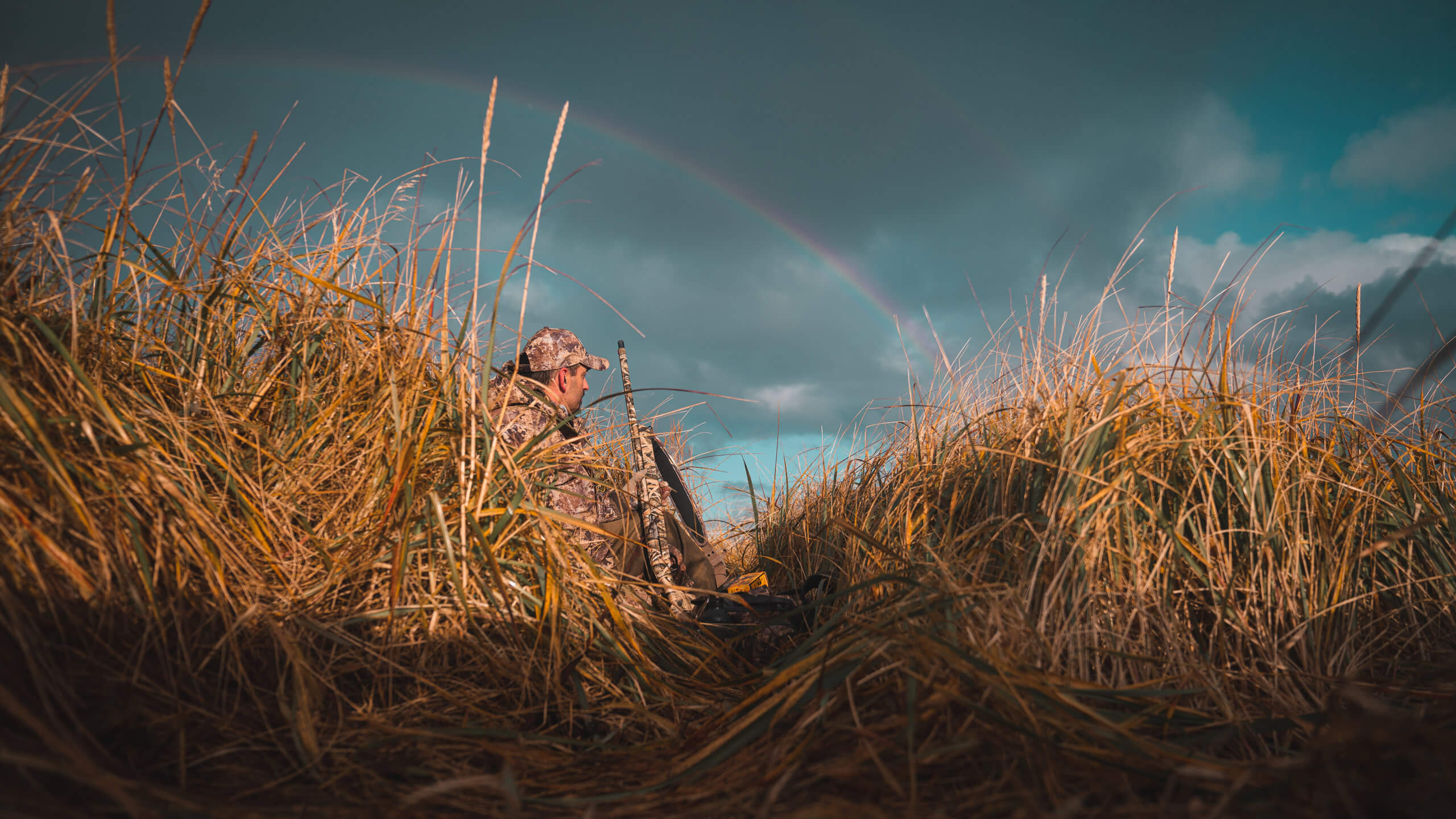 We headed back to the lodge for lunch and decided that a new tactic was needed. Jeff and I would take out his skull boat and try to drift into some unsuspecting ducks. That strategy worked perfectly, and I was able to take two Red-breasted Mergansers. Mergansers are fully colored later in the year, around January, so the two I took had not developed their colors yet. 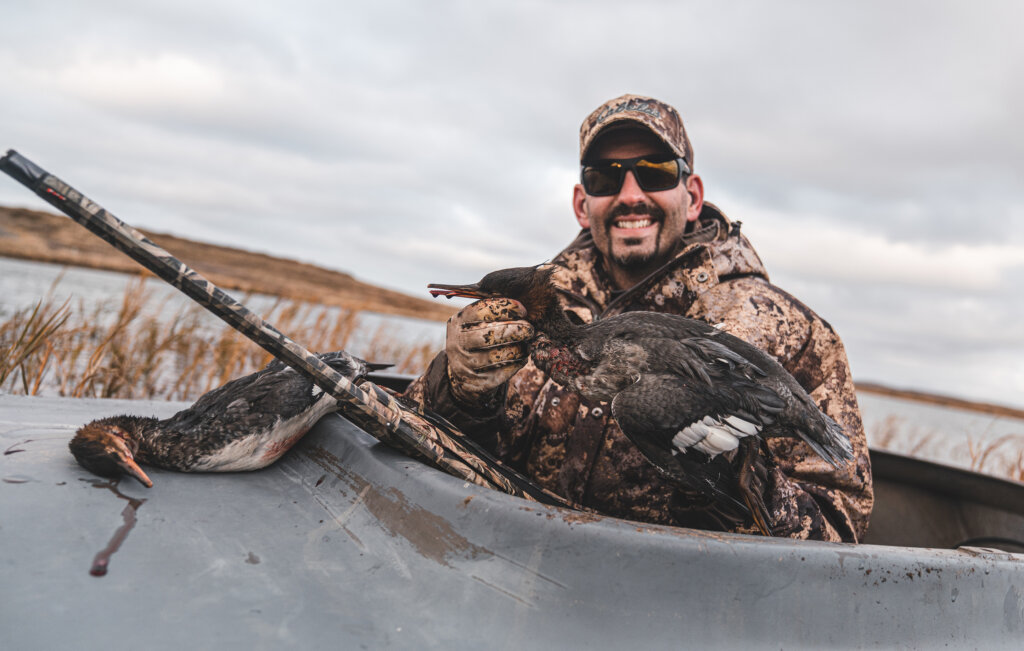 We woke up on day four to perfect conditions—cloudy and the wind had finally picked up a bit. It appeared to be a promising day as we prepared for our hunt. Our goal for the morning was the magnificent Harlequin. Due to their rarity, hunters in Alaska are only allowed to harvest four Harlequins per season. We left the Cold Bay dock and headed to the far side of the large bay. The setup was perfect. We were positioned in a layout boat on a spit of land with the tide receding. Two lines of old cork decoys formed a V in front of us. The hunt was epic! Our film footage was exceptional, and everything worked perfectly. Rarely have I been able to say with certainty that I’ve gotten everything perfectly set up for a hunt. This is one of those rare hunts. Dad and I each shot three Harlequins. We shared an amazing morning of hunting that will never be forgotten. 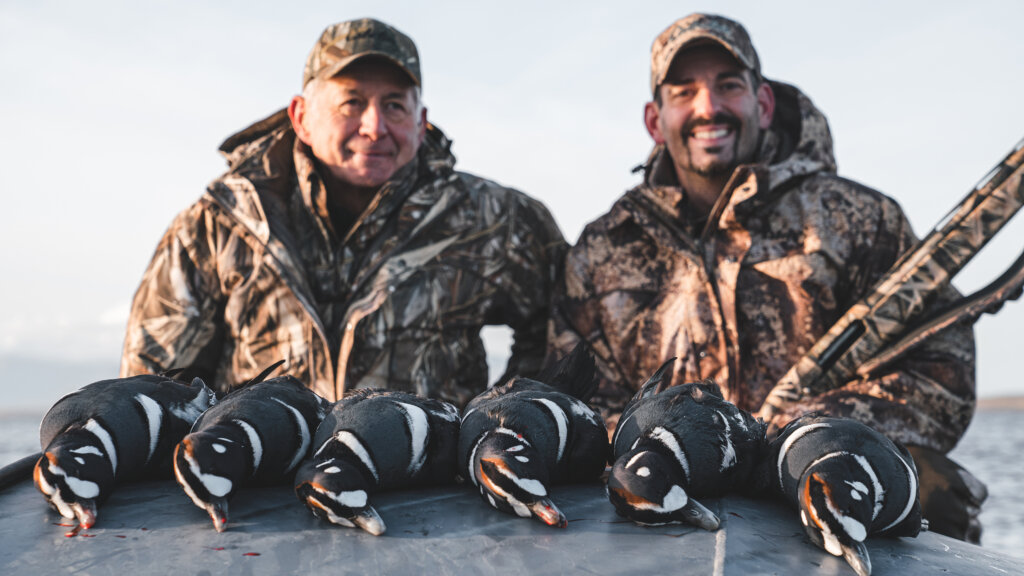 We returned to the lodge for lunch. After checking the afternoon’s weather, the wind and cloud-cover forecast made it perfect for giving Pacific Brant another try. Jeff suggested that we take the layout boat to a brant hotspot located about forty-five minutes away. Upon arrival, there were thousands of brant in the air and on the water. The plan was to pull the layout boat with the outboard boat as close as we could to where the brant had been flying low. However, the best plans don’t always pan out. The water depth was too shallow for an outboard where we wanted to set up, so we had to drag and push the layout boat with the bags of decoys. We set up the layout boat about two hundred to three hundred yards away from the deeper water where we had parked our outboard boat. One hunter and a camera guy stayed in the layout boat and the rest of us walked back to our outboard boat and backed off.

Although our original plan for setup didn’t work like we hoped, the hunt itself couldn’t have worked out any better. Sometimes things work out perfect—just like that morning’s hunt, this was one of those times. The daily limit of brant is two per hunter. The first group came in and spread their wings to land. Within 15 minutes, I had my two-bird limit. Dad followed and the same thing happened. That night, we were finally able to enjoy brant for dinner—definitely the tastiest waterfowl I have ever eaten. 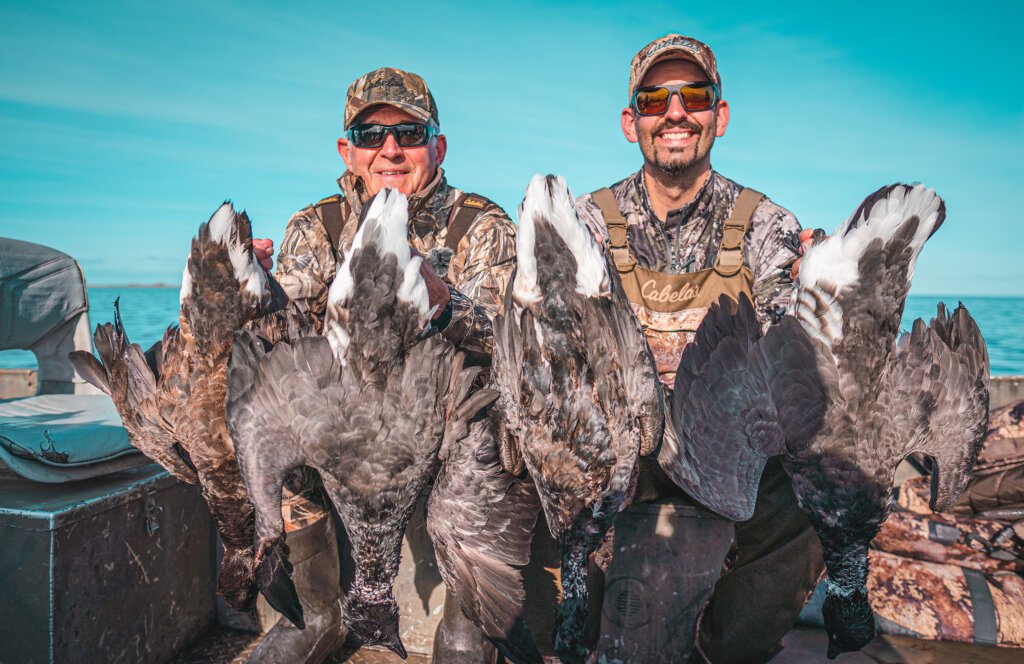 Day five was extremely nasty with sixty-miles-per-hour winds. No boats could go out of the dock. We decided to hike a couple miles off of a gravel road to a small lake. We’d hoped to jump shoot some waterfowl and find a corner where we could put out some decoys. There wasn’t a lot of action, but we did get some shooting in and added Aleutian Green-winged Teal and Mallards to our mixed bag.

The excitement of the day was a pesky brown bear again. We saw him come out on the other side of the lake and watched as he walked toward us. He would put his nose in the air to smell, but the wind was at his back, so he was unable to smell us and kept coming. When he was within seventy-five yards, we didn’t want him any closer and decided we should try to scare him off. We yelled and shot our shotguns in the air. It didn’t faze him. It was one of those situations where one of us had to go. He wasn’t going to leave, so we loaded up our decoys and carefully backed out and headed back to the lodge. 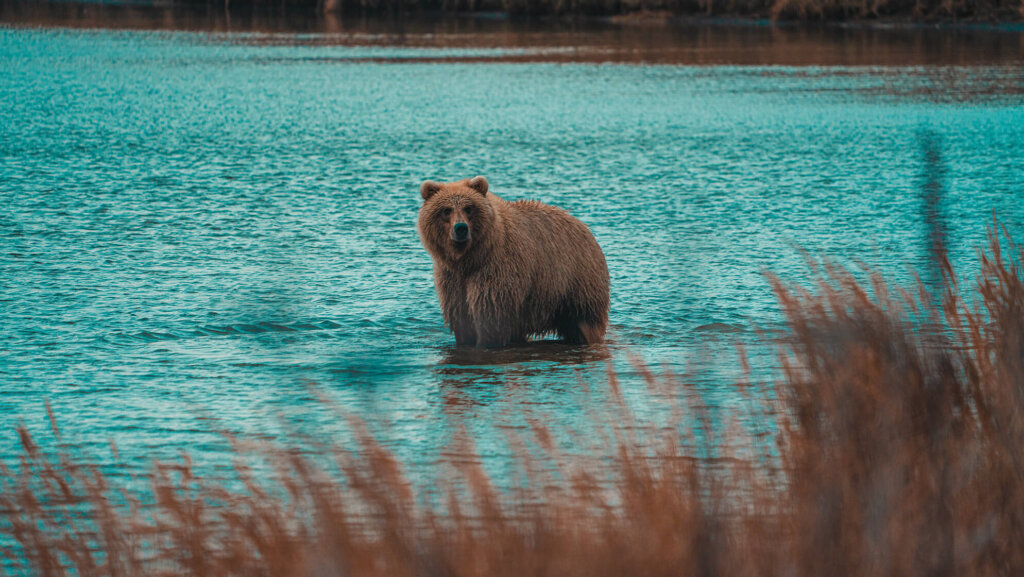 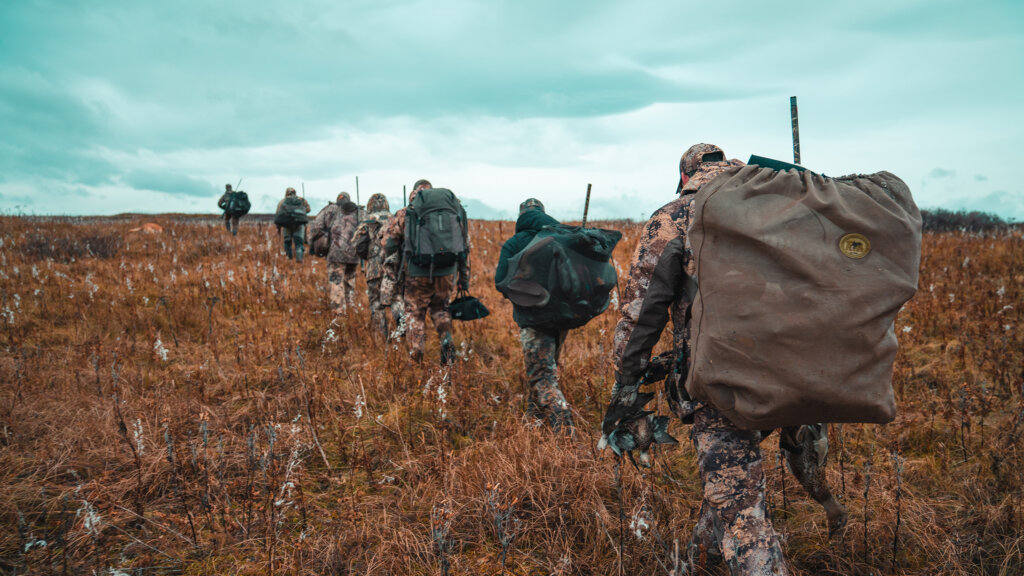 The next day was more of the same hard winds. We definitely weren’t getting out on a boat, so we decided to hike to a lake farther away and drop some decoys. The hike in took several hours and really cut into our hunting time. It was all worthwhile and we ended up limiting on a mixed bag of Mallards and Wigeon. We had one day left in Cold Bay. My primary goal had been accomplished with the Cackling Goose on day one. I held out hope that I’d have the opportunity to bag a Greater Scaup the next day. So far, I’d harvested six of my forty-three required species, but success on a Greater Scaup would relieve some pressure as I continued this challenge.

Unfortunately, the wind continued to howl our last day in Cold Bay. Using a boat was out of the question. Our best option was another hike to a lake we hadn’t tried, hoping for another mixed bag. At our first stop, I was able to take a drake Bufflehead—number seven. Later on, Dad and I were hidden in some tall grass and we took additional Bufflehead, Widgeon, and I hammered a Common Goldeneye—number eight. Sounds like a successful final day in Alaska, right? In the back of my mind, I couldn’t help but be concerned. To tell the truth, it was the two ducks that I had missed that worried me. With the wind at their backs, two Greater Scaup had screamed over my head. I missed them both. Finding another Greater Scaup at a different location would be difficult. I hoped those two misses would not come back to haunt me. 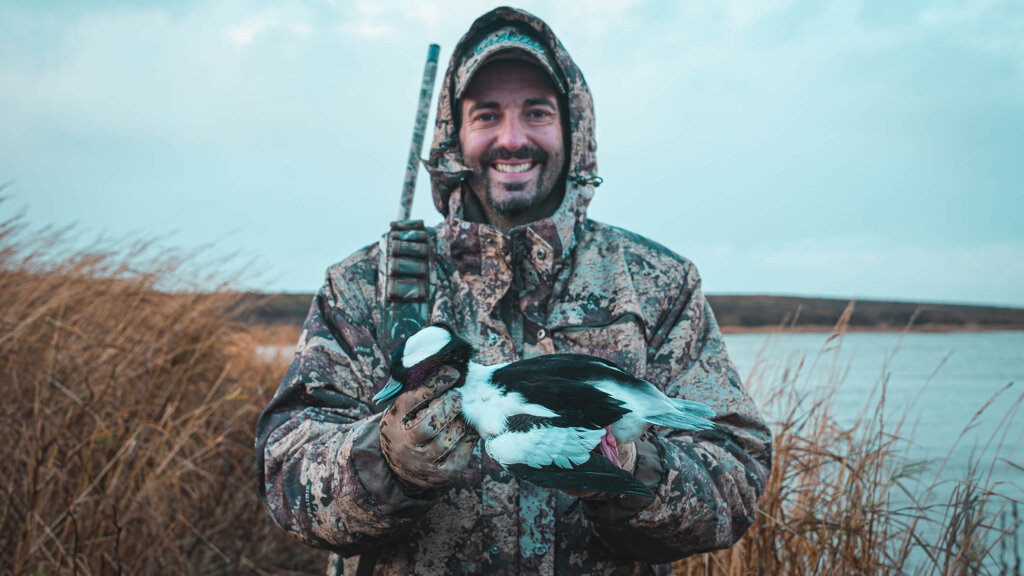 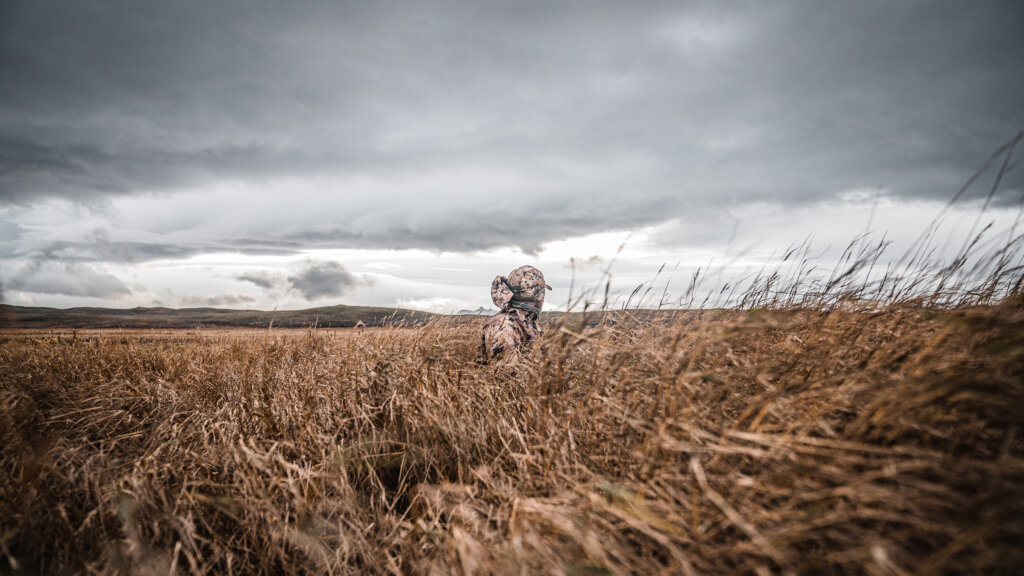 Early the next morning, we were on a plane back to Michigan. After a couple of days at home to rest and repack, we left for our next stop—North Dakota.