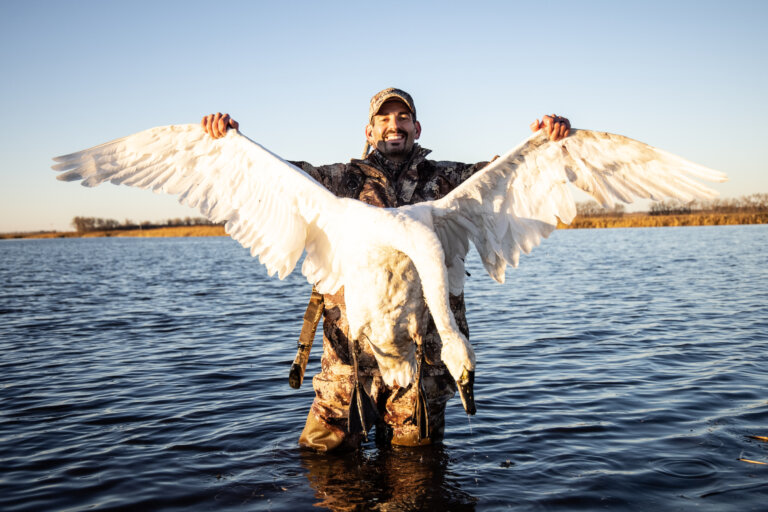 In addition to Greater Scaup and Cackling Geese, the Tundra Swan is another difficult bird to harvest. You cannot purchase an over-the-counter Tundra Swan permit, and many states don’t even have a season for them. States that do have a Tundra Swan season require an application process that gets the hunter entered into a drawing. This presented a major challenge as we planned the hunts for the forty-three species required for the Waterfowl Slam. We had to consider planning hunts that I may or may not have the license for. There was no assurance that I’d be able to even hunt the Tundra Swan in order to complete the Slam.

To guarantee I had the best opportunity to draw a permit, I applied in every state that offered a Tundra Swan season. Luckily, numerous states notified me that I had successfully drawn. “The Duck Factory,” North Dakota, was the first of those states to open their season. On November 1, 2020, my cameraman Justin and I traveled from Michigan to North America’s Central Flyway in North Dakota.

A good friend and associate at WTA, Jason Berger, was born and raised in North Dakota. Jason is a twenty-seven-year veteran hunting consultant and director at WTA. His knowledge provided us with a definite advantage for this hunt. Jason’s brother Ryan and his family still operates the family farm in Barnes County, located in the east-central portion of the state. They’ve recently supplemented the farm with Baldhill Creek Adventures, a high-quality hunting operation offering whitetail, pheasant, Sharp-tailed Grouse, and waterfowl hunts. Baldhill Creek Adventures accepts a very limited number of hunters each year. The long-term conservation and preservation of the property and the animals that call it home is a pillar of the Bergers’ business. 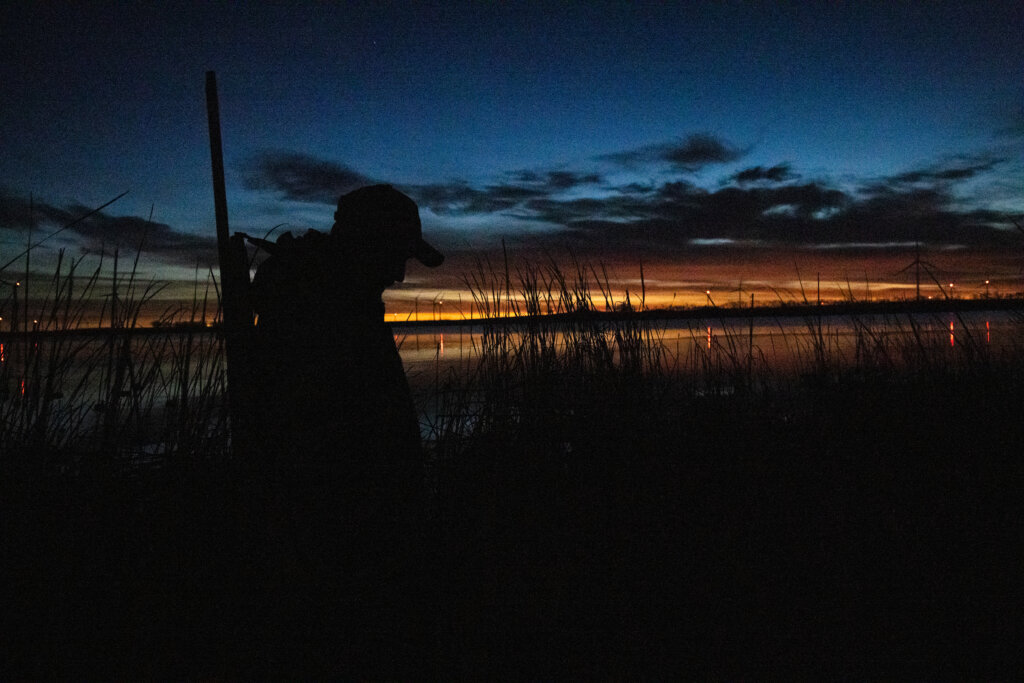 The week before our arrival in North Dakota was perfect duck weather. It was cold and windy, and waterfowl were moving through by the thousands heading south down the Central Flyway for warmer temps. It would be my luck—in the days leading up our trip, bitter cold hit the area. When we arrived, the weather had taken yet another turn. The sun was shining, temps were in the sixties and there was very little wind—definitely not good duck hunting weather. To add to the unfortunate situation we were in, the smaller ponds where waterfowl normally land remained frozen. Even with the moderate temps, it was hard to believe that the ponds weren’t thawing and opening up more. This really was a testament to how severe the freeze was prior to our arrival. So far, the theme of my Waterfowl Slam was something I’m sure every hunter has heard: “Shoulda been here last week.”

Our first morning in North Dakota, we traveled about an hour from the lodge and hunted a larger lake with open water. When we arrived, we had to break a thin sheet of ice along the shore and push it out, giving us a small open area to put out a few decoys. We found pretty good cover sitting in cattails along the shore. There were hardly any ducks in the air, but I did drop two passing Common Mergansers to add to my Waterfowl Slam tally. I didn’t know it at the time, but these were the only shots I would get at a Common Merganser during the course of the season. With no other ducks flying, we decided to pack up. Before leaving, I saw a small group of Ruddy Ducks on the lake about four hundred yards away. Ruddy Ducks are often hard to get off the water and rarely land in decoys. We made a quick plan and I quietly moved up the shore to try and jump shoot them. I snuck four hundred yards along the lake’s bank near where we’d seen the ducks. When the Ruddy Ducks saw me, the flock flew and I dropped a drake. Considering the poor hunting conditions, two ducks—bringing my Waterfowl Slam total to ten—made our first morning in North Dakota a definite success. 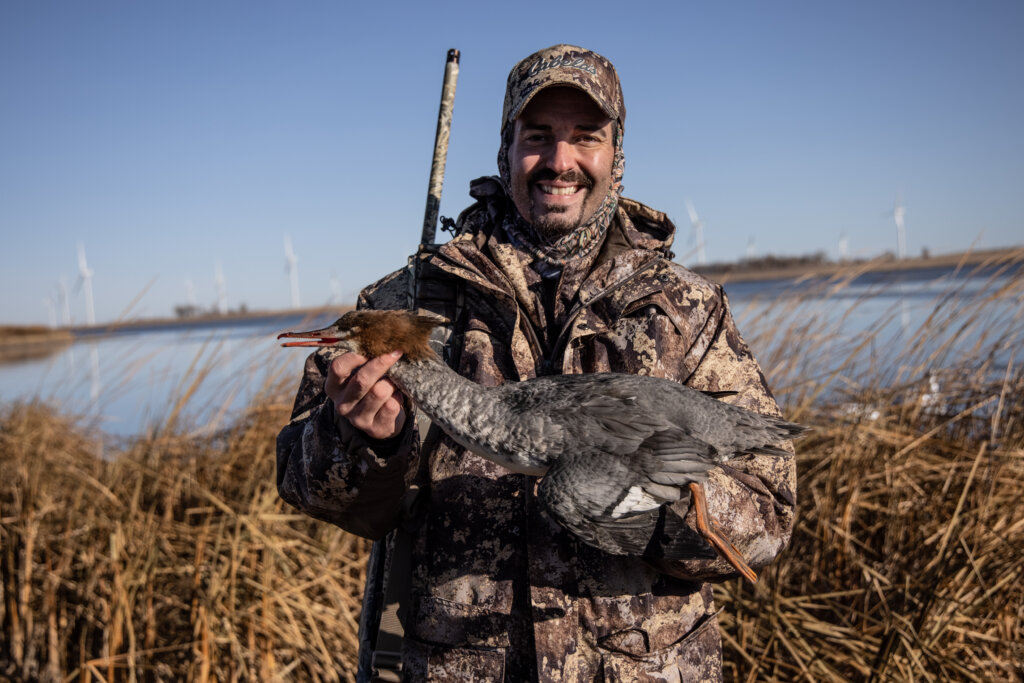 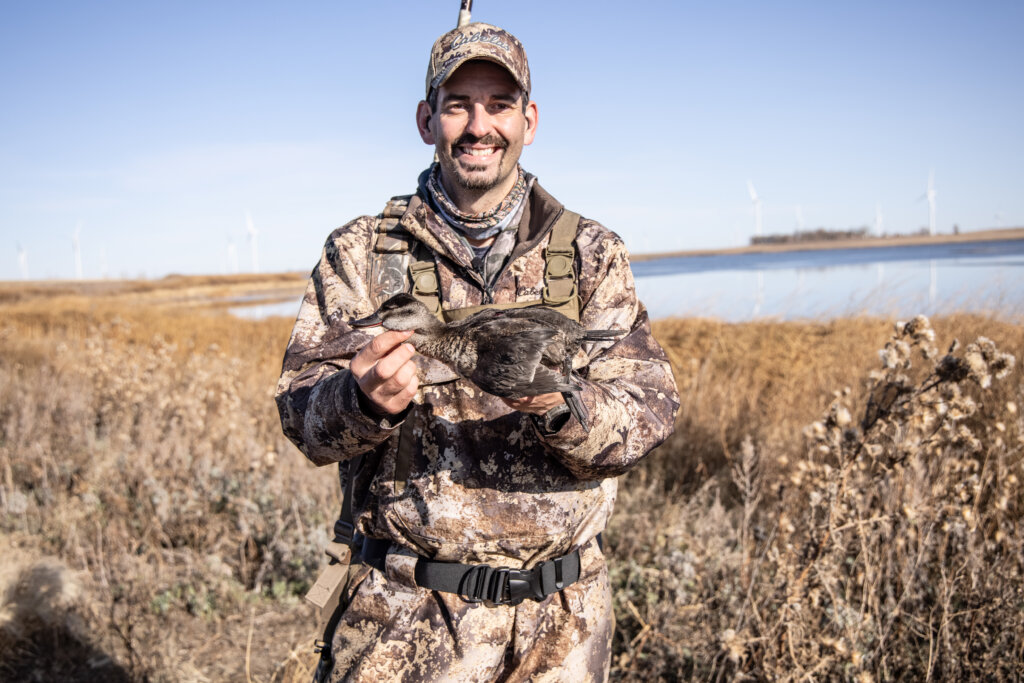 I assumed before I arrived that finding open water was going to be a problem following the storm and extreme cold conditions the week before. Ryan and our guide, Ken, had put an aerator in a small pond located near the lodge. The aerator prevented the pond from freezing over so ducks could land on it. After lunch, Ryan and Ken went to remove the aerator so I could hunt the pond later that day. While they were doing that, Justin and I each had to take a self-administered COVID test and deliver the tests to a nearby town so they could be processed. We needed negative results back before we’d be allowed to fly to Kodiak, Alaska, a couple days later. On our way back to the lodge, I spotted a smaller lake with two hundred to three hundred Tundra Swans on it. It looked like a great spot to successfully hunt a swan. I pulled up as close to the pond as I could and found the pond on my HuntWise app. I took a screenshot of the location and sent it on to Ryan. As luck would have it, the property owner’s daughter took dance classes with Ryan’s daughter. Ryan made a phone call and obtained permission to hunt the pond the next morning.

When I returned to the lodge, I waded into the cattails in the pond where the aerator had been. I began getting discouraged as the sun started to set on the horizon and I hadn’t seen any ducks. Just before the end of shooting light, a single drake Redhead came swooping in. I was able to drop him for my third species of the day. 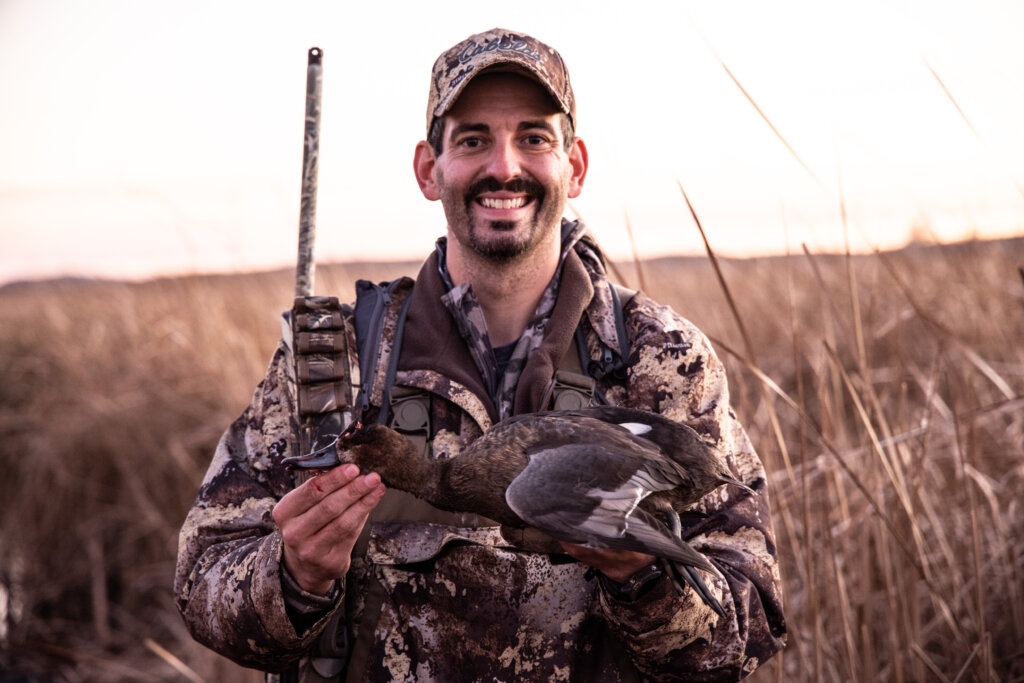 The next morning’s plan was to hunt the small lake holding the swans that I scouted after my COVID test. We wanted to put out a spread of decoys before sunrise. It was a good plan, but unfortunately there was a thin layer of ice hidden in the cattails. There was no way of knowing this when we scouted the lake the day before. We made a lot of noise getting through the cattails—we broke through the ice with every step we took and watched swan after swan leave the lake. Eventually our decoys got out and we hoped that some swans would fly back to the lake later in the day. When it was finally shooting light, we were able to see that four Tundra Swans remained on the lake. About fifteen minutes later, they took off. I momentarily thought my best opportunity had passed. Then, the largest of the four broke off from the other three and circled back, flying right over me. I hit him three times and he went down in the field behind us. Of the six North Dakota Tundra Swans I have shot, this one was by far the largest. Ryan estimated him at seven years old. I was now at twelve of the forty-three, and my primary target for this trip was a success. 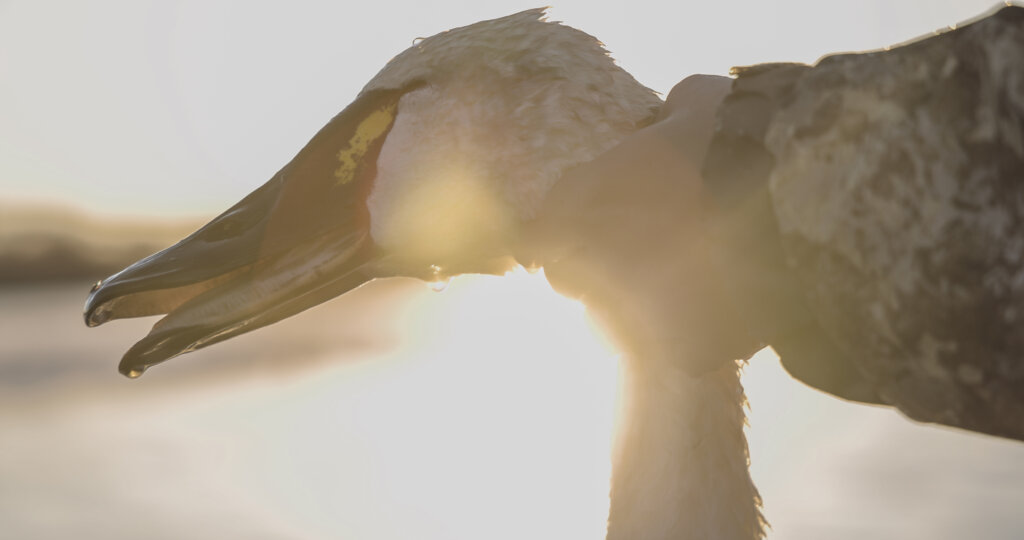 During lunch, Henry stopped by and said that he had seen a bunch of Gadwalls near a field he was farming. They were landing on a small pond in one of the Bergers’ best pheasant hunting fields. I hadn’t checked Gadwall off the Waterfowl Slam list yet, so that became our goal for the rest of the day. We waded out into the small pond using the tall grass for cover. The birds didn’t have a clue we were sneaking in there and we got some great footage of ducks coming in and out. By the end of the afternoon, I was able to check Gadwall off my list. It was a great afternoon hunt and I actually ended up with four Gadwalls. 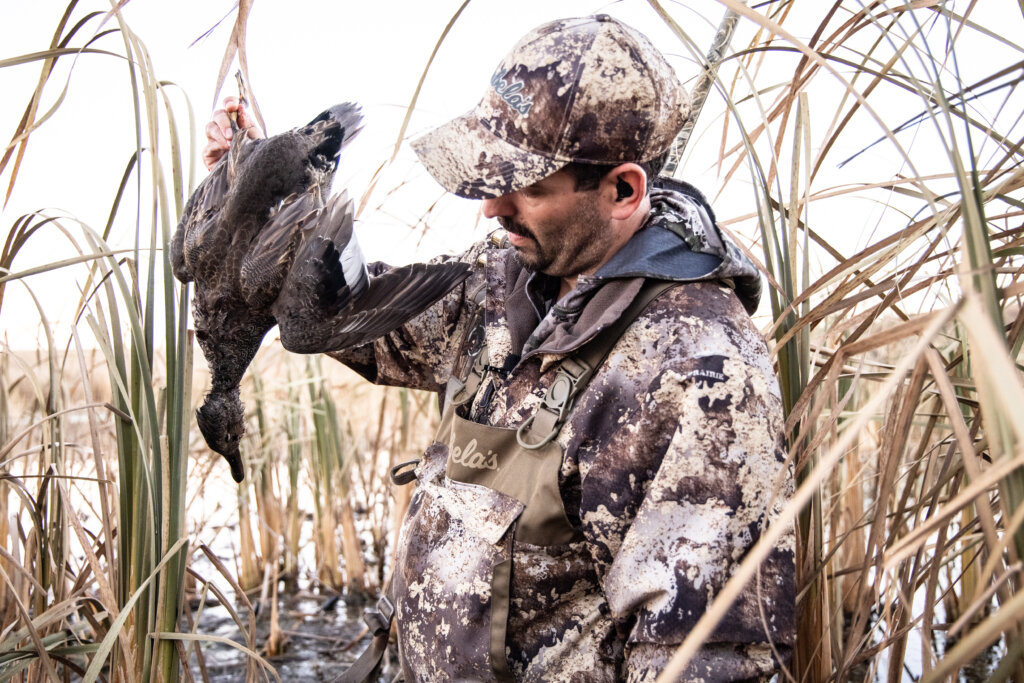 Our final day in North Dakota was definitely not a good duck day. It was too hot and there wasn’t any breeze, so very few ducks were moving. We spent the morning at the large lake we hunted the first day. From a distance, we saw a Canvasback, Goldeneye, and Lesser Scaup, but no shots were taken. After lunch, we returned to the pond that the aerator had kept open. There were no birds there, and no shots were taken there either. It was a disappointing final day of hunting due to the weather, but that’s the way it goes sometimes. It’s one of those things that’s impossible to account for.

So far on my Waterfowl Slam journey, the weather hadn’t cooperated. Prior to going to Cold Bay, a storm the previous week had sent much of the waterfowl south. The same thing happened in North Dakota. We checked eight species off the list in Cold Bay and added five more to our count in North Dakota, bringing our total to thirteen. I had planned on having more than twenty species checked off the list before going to Kodiak. With normal hunting conditions, I’m confident we would have been in the mid-twenties. Although we had taken some difficult species, this was not the start I had hoped for. Like I said earlier, “Shoulda been here last week” continued to be the theme for my Waterfowl Slam. I had a lot of making up to do, but at least I had passed the COVID test and could travel to Kodiak. 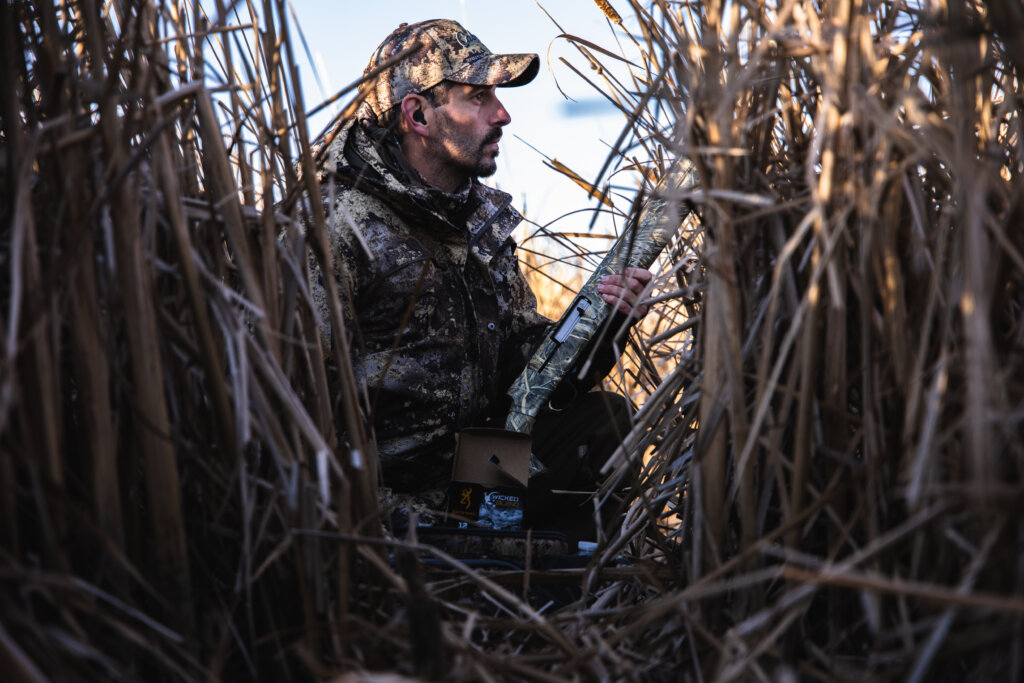 In the middle of the night, Justin and I left the lodge and headed for Fargo. Early the next morning, we met Dad and our cameraman, Jesse, at the airport and were on our way to our next Waterfowl Slam destination in Kodiak, Alaska. 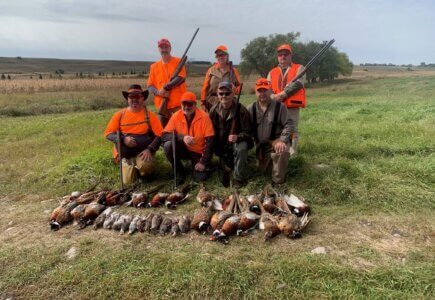 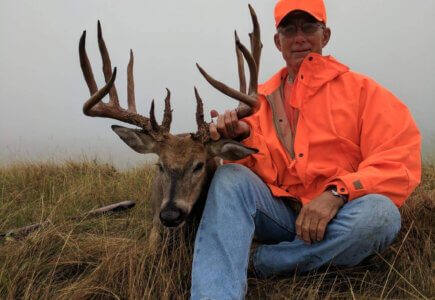