Waterfowl Slam – Time to Get Creative – Florida. The Journey Within, A Bird Hunters Diary 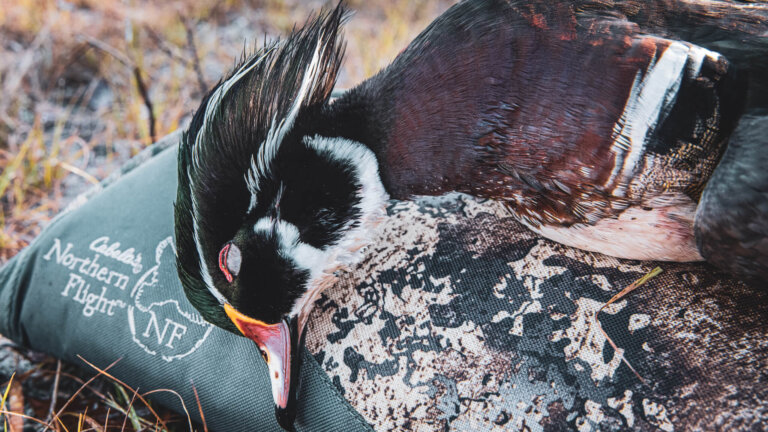 Billy is one of the most respected outfitters that works with WTA. The Osceola Turkey is the most difficult turkey species to successfully hunt within the United States, and Billy definitely knows how to get the job done. He leases a tremendous amount of land in north central Florida, and he’s extremely careful not to overhunt any of his parcels. The result is a very high success rate with WTA hunters. Billy also guides waterfowl hunters. We had tentatively targeted a Greater Scaup off Florida’s northern coast. After the weather pushed the Greater Scaup out of the area, I decided to make a Wood Duck my target.

Billy took us to one of his leases where he had recently seen good numbers of Wood Ducks. The amount of property he has available to hunt makes him an awesome outfitter for turkey and waterfowl. Whether you want to check an Osceola Turkey off your bucket list, or enjoy some of the best waterfowl hunting in the United States, contact WTA and they’ll hook you up on a hunt with Billy. 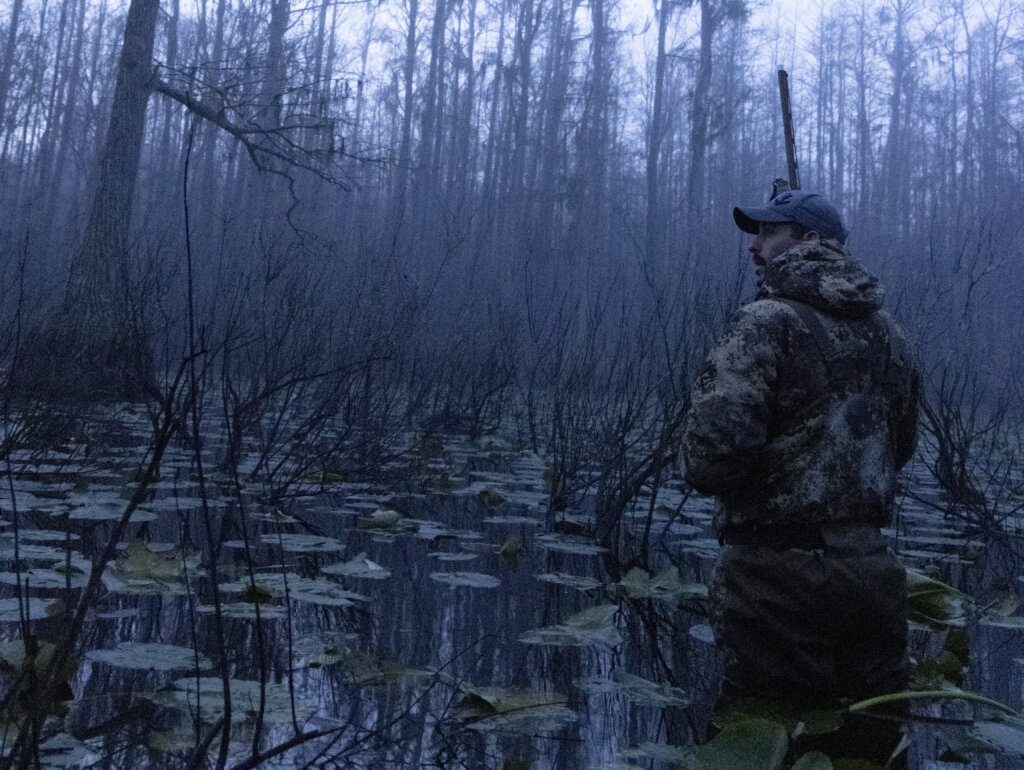 Well before shooting light, we were standing in eighteen inches of water. We expected most of our action to begin at shooting light—and as expected, just prior to shooting light, we had several Woodies buzz us. However, once we were able to start shooting, there were absolutely zero ducks in the air. We watched the empty sky for thirty minutes before Billy spoke up: “Let’s move.”

We drove about five minutes to another of Billy’s leases and parked. He explained that there were some small ponds on this lease that normally held Wood Ducks. We would try and jump shoot them. At the first pond, we quietly moved close to the edge and were able to see a group of about twenty Woodies on the pond. Before we were in position, the Woodies flew! I picked out a large drake and was able to drop him at around thirty yards. Number thirty-three was down! Unfortunately, he was in the middle of a thirty to forty feet deep pond. We couldn’t wade out to him. We didn’t have a boat. We didn’t have a dog. We had to get creative if we were going to get this duck. 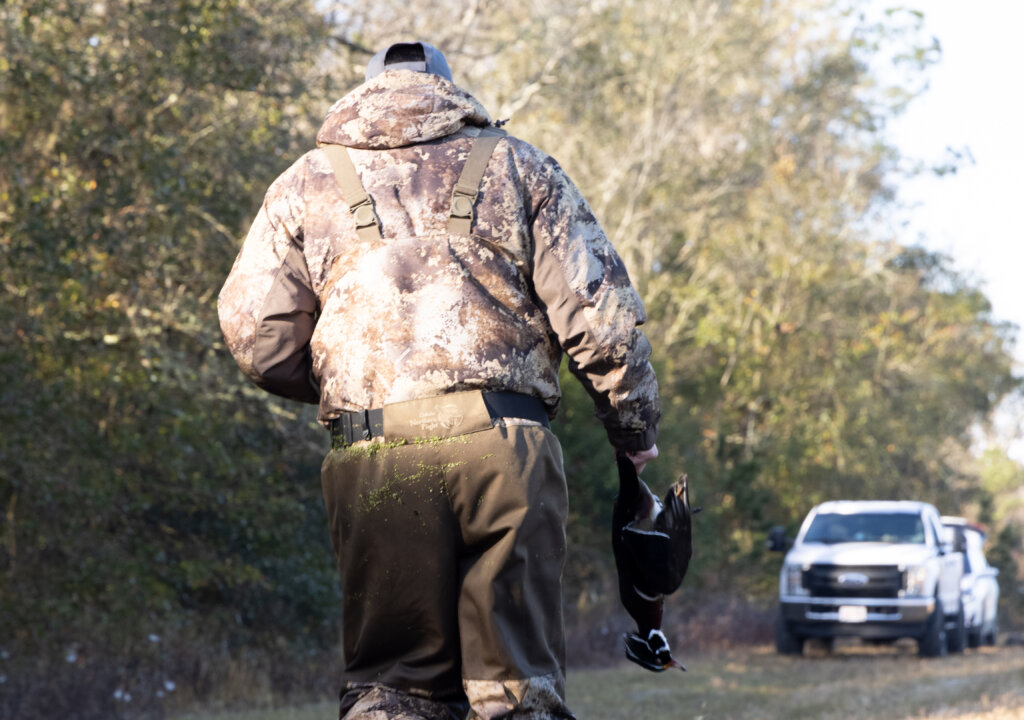 My cameraman, Justin, came up with a good idea. Justin carried a drone in his pack during to film overhead footage of the various areas we hunted. His idea was to attach a small hook to a string and tie the string to his drone. We were going drone fishing for a downed duck.

Prior to this point in my life, I honestly never would have imagined I’d be without a dog or boat, trying to retrieve a Wood Duck with a drone. The idea didn’t work out, but we noticed that the drone’s propellers created small waves in the pond. The drone made enough waves to push the Woodie toward the bank with the air from the drone’s rotors. In a relatively short period of time, I had the drake in my hands. This drake was not the typical Wood Duck I was accustomed to. He was a fully colored, mature drake with longer head feathers than any Woodie I had taken before. He was the most beautiful Wood Duck I had ever seen. Not only had I checked number thirty-three off my list, but I also had a beautiful trophy. 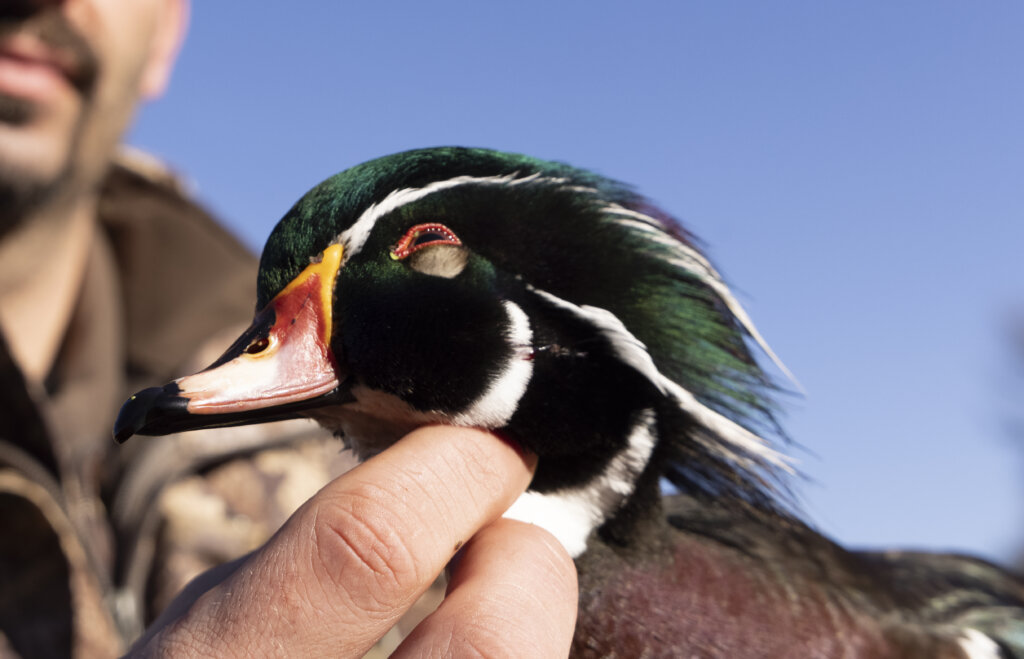 Billy wanted to take me to more of his leased ponds, but I decided we should move on. It was hard to pass up hunting the remainder of the day with Billy—but with every day that passed putting me one day closer to the end of the waterfowl season, I felt the pressure mounting. My goal here had been a Wood Duck—I’d accomplished that goal and decided it was best to continue chasing the ten Slam birds that remained on the list. It was going to be tough if I didn’t get a couple more checked off the list here in Florida.

Billy made arrangements for us to hunt in southern Florida with his friend, Kenny on Lake Okeechobee. By that evening, about 250 miles later, we were in a motel near Lake Okeechobee. The most prevalent waterfowl in the area are Blue-winged Teal, Mottled Ducks, Ring-necked Ducks, and Ruddy Ducks. The potential was there to check off at least three dabbling ducks. 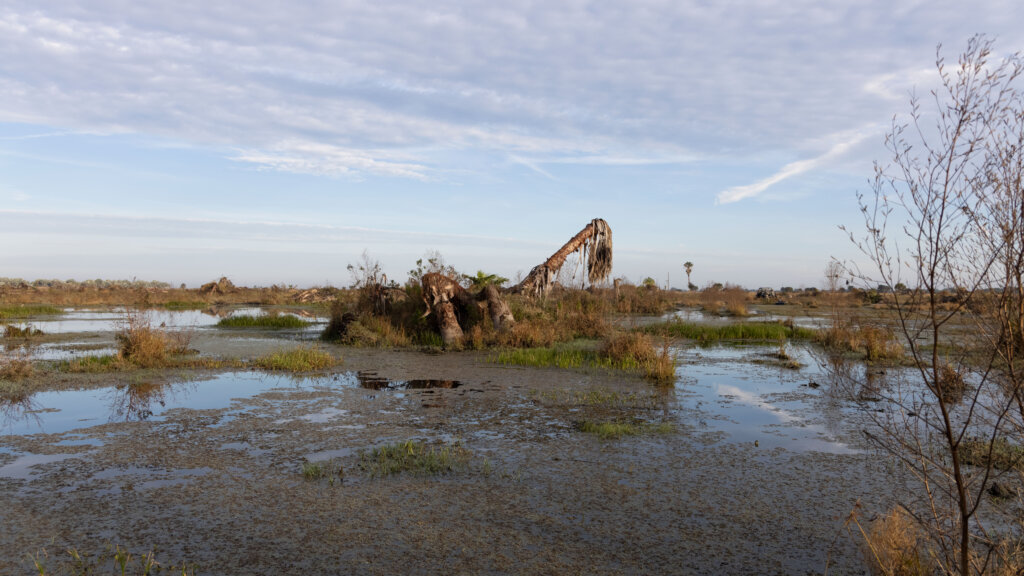 Early the next morning, we met Kenny at his home. Kenny was excited to help me complete the Slam, and took us to a private lease that he normally saves for himself and his wife. We were set up to shoot off of a twelve-foot-by-twelve-foot grass island on an eighteen-inch-deep flooded field. Kenny put out a spread of thirty Teal decoys plus three motion decoys. He told us that he has found great success using motion decoys and almost always has one set up when hunting.

I had never hunted this area and was not sure what to expect. I’ll just say my first duck hunt near Lake Okeechobee was fast and furious. In twenty-two minutes, I had my daily limit—with one hen Blue-winged Teal, a drake Green-winged Teal, and four Black-bellied Whistling Ducks. Of the three species shot, two were target ducks! I checked number thirty-four off the list with the Black-bellied Whistling Duck, and although this Blue-winged Teal was a hen, I would get my drake later on in the hunt for number thirty-five. What a hunt! 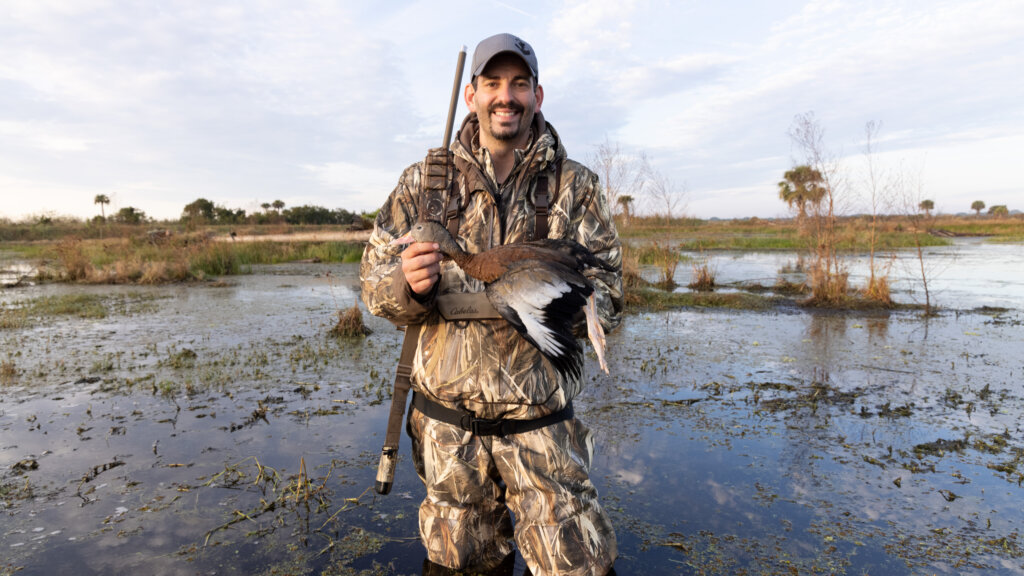 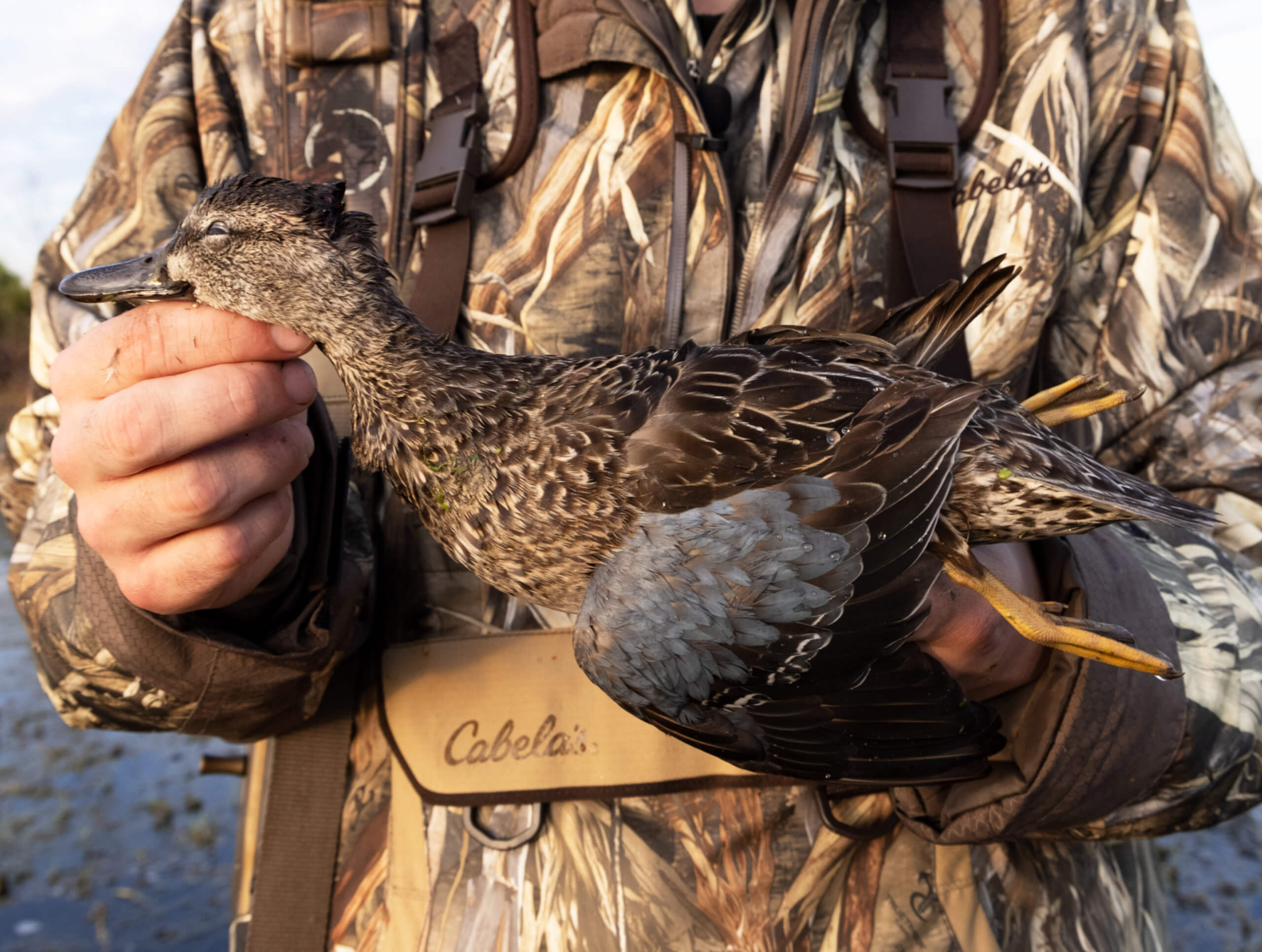 On the way back to Kenny’s place, we scouted for Mottled Ducks, and Kenny showed us a little flooded hole with eight or ten Mottled Ducks on it. I’d already taken my daily limit, so these ducks would be safe that day. That flooded hole is where we started the next morning. Kenny put out four Black Duck decoys and one motion decoy. I hid in some cattails waiting for a drake Mottled Duck. The daily limit is only one, and I had to be sure I picked out a drake to count toward the slam.

While waiting for legal shooting light, a large flock of Teal and some Mottled Ducks landed in front of me. I could distinguish the drakes, as they sound similar to a Mallard—with a low, raspy “raeb” sound. Just after it was legal to shoot, a Mottled Duck circled and flew in front of me. I could see his brighter-colored beak and knew he was a drake. I took a single perfect shot—and dropped him for number thirty-six on the Slam list. We waited at the pond a bit longer and I took a couple of Teal. That day’s hunt was over in an hour. We loaded back up in our rental SUV, thanked Captain Kenny, and said goodbye. We never saw a Fulvous Whistling Duck in Florida. 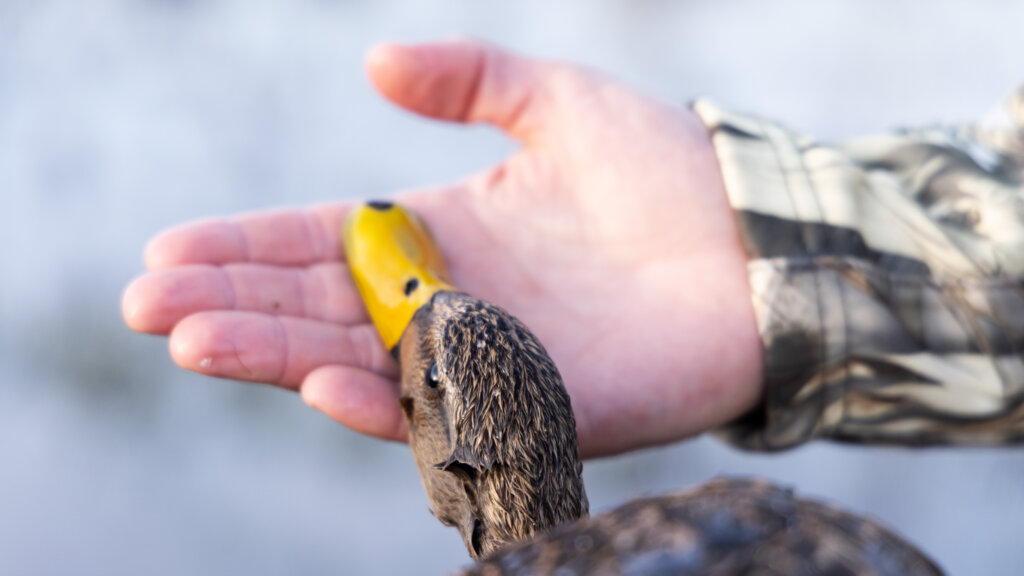 When we got back to town, we booked flights back home, and with thirty-six species checked off the list, I was feeling a little more confident that the North American Waterfowl Slam could be achieved. I remain excited about that gorgeous Woodie I took with Billy, and smile whenever I think about “pushing” it across the pond with Justin’s drone. I had three days before leaving for my next hunt on the Atlantic coast. 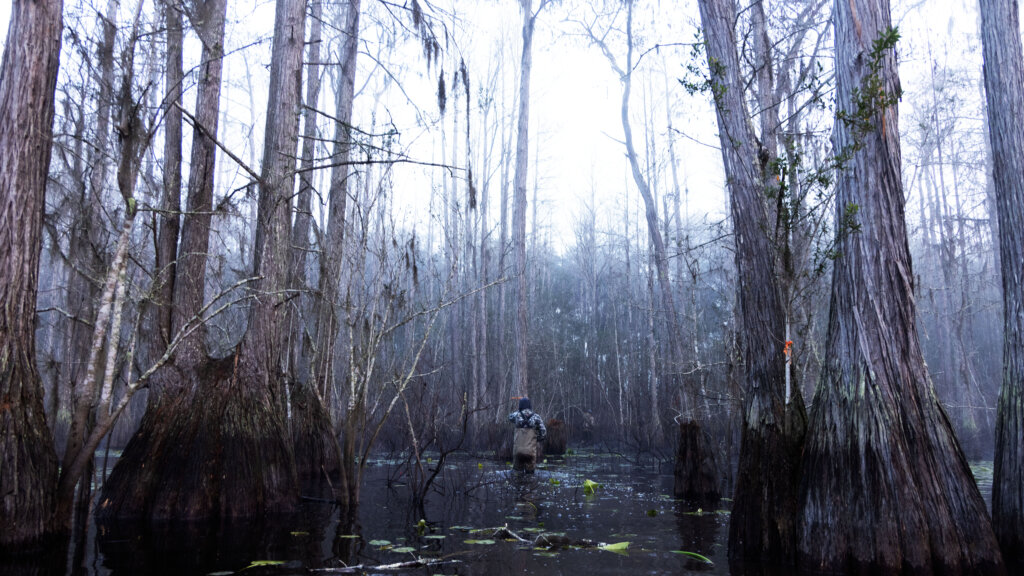