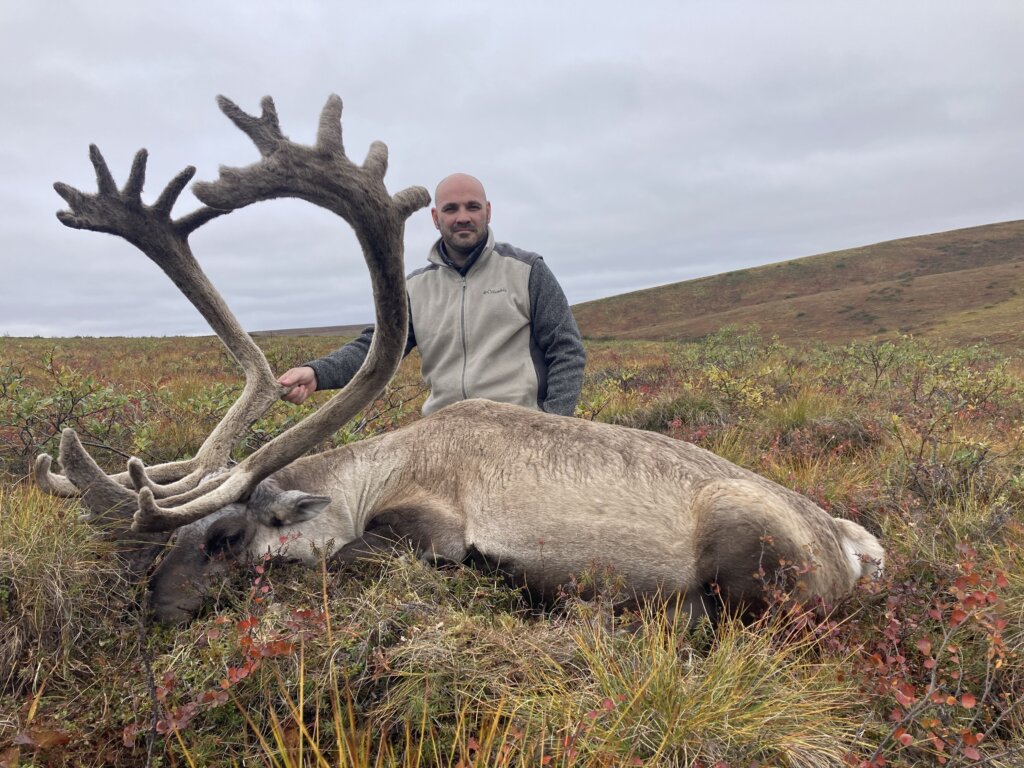 Arrive/depart dates in hunting camp are Sunday to Sunday

The coastal plain comprises only 10 percent of the arctic; yet during the summer, it is the center of biological activity. For centuries, caribou have used the coastal tundra to calve, obtain nourishment, avoid insects, and escape predators. The summer grounds of the caribou herds include the northern foothills of the Brooks Range and the arctic coastal plain. The entire caribou herds continue to use the coastal plain when calving is completed. We do not need to hope and pray caribou are going to arrive; from May to September they are here and have been for centuries. This outfitter’s combined guide territories encompass the majority of the arctic plain from east to west and from the continental divide to the Arctic Ocean. They have thousands of square miles in which to hunt.

These caribou are the Alaskan Barren Ground species, which have the largest body sizes and antler sizes of all caribou species in the world. The hunts are fully guided, 3×1, 2×1, or 1×1 depending on your party, and include hunting for one caribou.  Grizzly may also be added on a trophy fee basis (just purchase the tag up front). The area stretches from over 400 miles east to west and 200 miles north to south, so the outfitter can go to wherever the caribou happen to be. With the decline of caribou herds in other areas of the arctic, we are pleased to offer these high success trophy hunts to our clients. #287

Purchase online prior to hunt at www.adfg.alaska.gov

Price includes one bull Caribou. All other species harvested on trophy fee basis.

Fly into Fairbanks, AK and charter to Umiat you will be met by the outfitter and transfer to camp ( Sunday to Sunday in and out of Umiat)

Sample Itinerary
Day 1 Depart home for Fairbanks, Alaska and then charter to Umiat. This flight will be with Wright Air (more details enclosed in hunt packet) and is approx. $1,450 (round trip) payable to Wright Air over the phone with a credit card. The outfitter will meet you at Umiat and you will then transfer to camp. *Charter cost is subject to change without notice.
Days 2-7 Caribou hunt.(6-day hunt subject to weather delays)