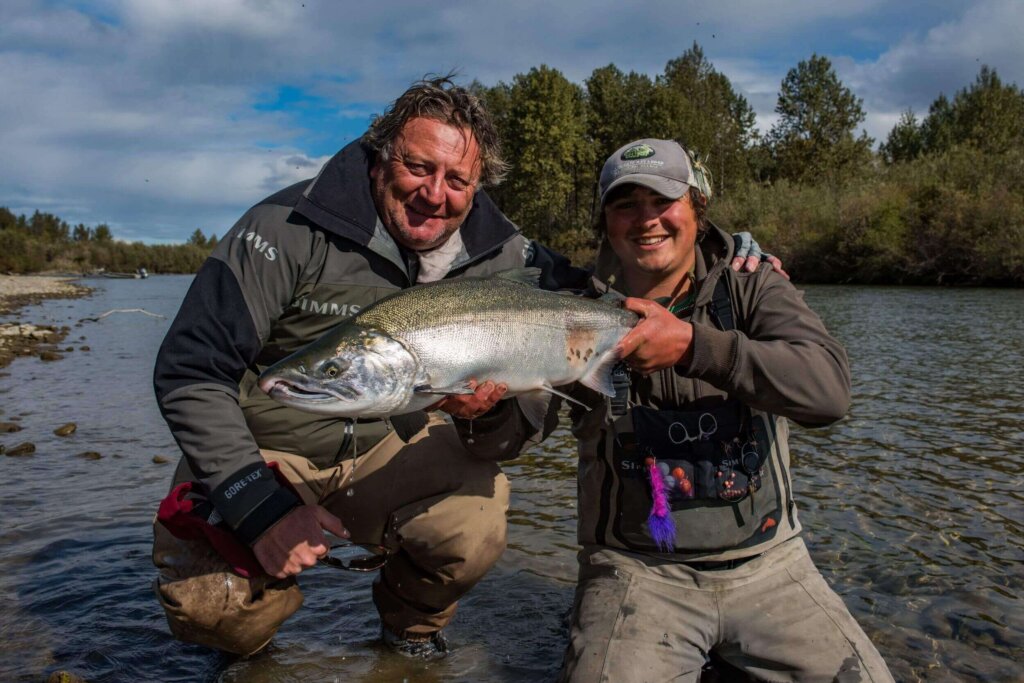 Located on the shores of Alaska’s largest lake, Lake Iliamna, this lodge is perfectly positioned to take advantage of tremendous salmon runs and world-class fishing for trophy rainbow trout, arctic char and grayling. This owner-operated lodge accommodates only eight anglers per week, assuring you of very personalized service. Designated as the only trophy trout management area in Alaska, you’ll fish for giant rainbows that can 30″! June is one of the best months for trophy rainbows. After a long winter, these trout are hungry and will often times chase a streamer right to your feet! In early to mid July, the area rivers and streams become flooded with salmon and nearly every cast can produce a strong fighting sockeye or chum. Annual salmon runs can exceed 10 million fish! By mid to late August, streams begin to see the annual migration of the silver salmon, considered the acrobatic of the five species of Pacific salmon. By mid-September, once most of the salmon have died off, this region of Alaska turns in to one of the finest rainbow trout fisheries in the world. Trout will feed aggressively on salmon flesh preparing for the winter ahead. Late September and early October is your best chance at hooking a 30″+ rainbow! Some of the rivers fished may include the Copper, considered one of North America’s Top 100 Trout Streams. Other area rivers include the Gibraltar, upper Talarick, and Moraine Creek. Floatplanes, cabin cruisers and jet sleds are all used to transport you into the fishing areas where you’ll experience some of Alaska’s most prolific fisheries. You won’t rough it here as accommodations consist of a brand new cedar log lodge that consists of five spacious bedrooms, wireless internet, 24-hour electricity, satellite tv, great room, and a state of the art commercial kitchen where delicious meals are prepared. Swap stories and enjoy a cold cocktail on the spacious deck overlooking Lake Iliamna.

Rates based on double occupancy.

"Our week was an excellent experience with good weather and outstanding fishing. We literally caught hundreds of Sockeye, Rainbow, Dolly Varden, and Grayling. Saw and photographed Brown Bears on the streams four days out of six, one Lynx, and many Bald Eagles. Brian and his staff were exceptional. The Lodge accommodations, meals, and amenities were first rate. Our fishing guides especially Wade and Evan were knowledgeable and excellent. I, we would highly recommend this trip, and we are considering going again in the near future".
Robert T.

Friday: Fly to Anchorage and overnight.

Saturday: Fly Iliamna Air Taxi or Lake Clark Air to Iliamna where you will be met and transferred via float plane to the lodge. Dinner and overnight.