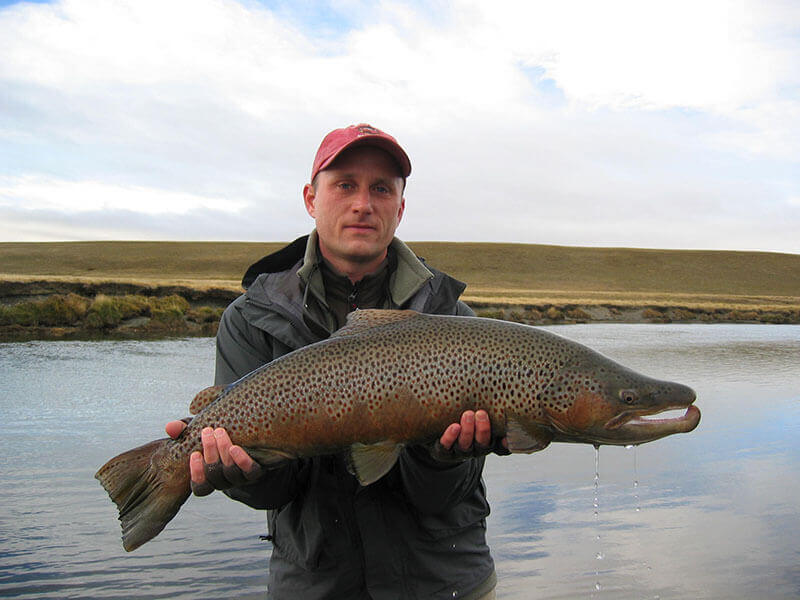 The first brown trout were introduced to southern Patagonia in the early 1930’s. 60,000 salmo trutta eggs survived the journey from Europe, and were placed into two tributaries to the Rio Grande river. The trout thrived and eventually progressed downstream in their search for food, until they came to the fertile estuaries of the sea. Sea Trout in Argentina grow especially large, as they feed on a variety of sardine, which is abundant off the coast of the provinces of Tierra Del Fuego and Santa Cruz. But, unlike the Northern Hemisphere species, the sea trout of southern Patagonia do not travel far from the estuaries of their home rivers. Unlike most anadromous fish, the sea trout will ascend their home rivers in small schools, not one or two large runs, so the fishing is productive throughout the season. The Rio Grande and Rio Gallegos rivers offer the very best in sea-run brown trout fishing. Thanks to a strict catch and release policy, these magical fish return each year bigger and healthier. Worldwide Trophy Adventures works with the very finest estancias in this region. You’ll fish miles and miles of private water on the famous Rio Grande and Rio Gallegos rivers in southern Patagonia. These magical fish average over ten pounds with fish pushing the thirty-pound mark caught almost every week. Competent fly anglers can expect to hook several trout each day. These rivers adhere to a very strict catch and release policy and fly fishing only. They can be easily fished from the bank with either single or double-handed eight or nine weight rods. Accommodations are very comfortable and delicious meals with the finest wines are served each day by a professional Argentine staff.

Fly to Buenos Aires and take a flight to Rio Grande.