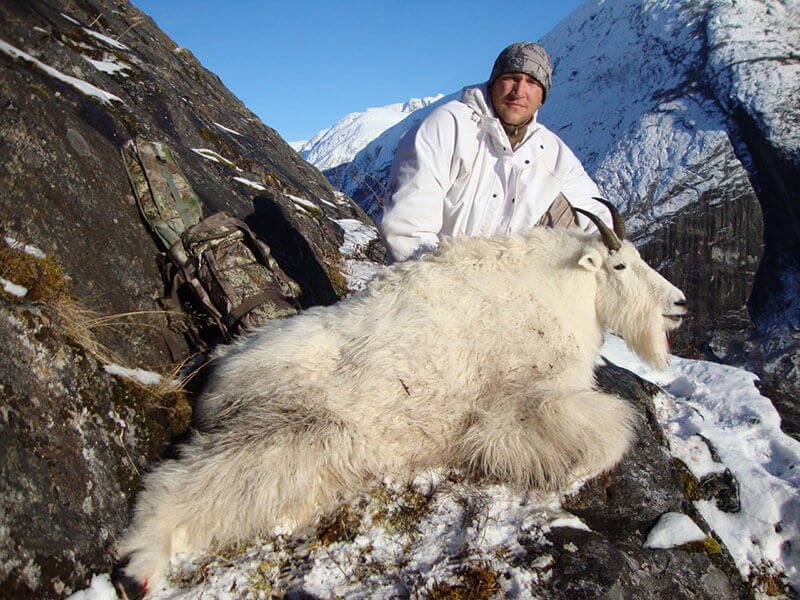 This outfitter has been outfitting customers for over 30 years. They specialize in boat based hunts for trophy Brown Bear, Mountain Goat and Coastal Black Bear.

The wild glacial landscape of Southeast Alaska’s Coastal Mountain Range has the highest density of Mountain Goats in the world and can be easily accessed by boats through its deep fjords. Their late season hunts, are unsurpassed by anyone. Success rates have been near 100% for many years for physically able hunters. Most Billy’s average over 9″ and few over 10” that have qualified for B&C record books. Limiting each hunt to two hunters, allows them to concentrate on your hunt and provide the highest level of customer service and comfort during your stay.

All hunts are fully guided 1×1 by experienced guides utilizing modern equipment and skiffs. Hunting later in the season allows hunters to hunt these goats during the rut and at lower elevations. It is not uncommon for trophy goats to be harvested on the coastal beaches. In addition to the trophy quality, late fall hunts offer hunters the opportunity to hunt these goats when their long haired coats are prime. That is very appealing to most hunters and makes for an exceptional trophy. This is one of the few late fall deluxe boat based hunts in Alaska.

Accommodations during your stay are on a “live aboard” 50’ deluxe vessel with delicious meals served daily. Due to the high demand and low annual hunter numbers reservations are often required over year in advance.

Purchase license and tag upon arrival in Juneau. License $160: goat tag $600. APHA fee $150 due directly to outfitter. Or purchase online at www.state.ak.us

Fly to Juneau, Alaska and overnight. You will be met by the outfitter or take charter flight direct to hunting area. You will have a charter flight on one leg of your trip, approximately $400, based on sharing flight.

Day 2:Depart Juneau for the hunting area via boat.

Day 10:Take a charter flight from the hunting area to Juneau and overnight.