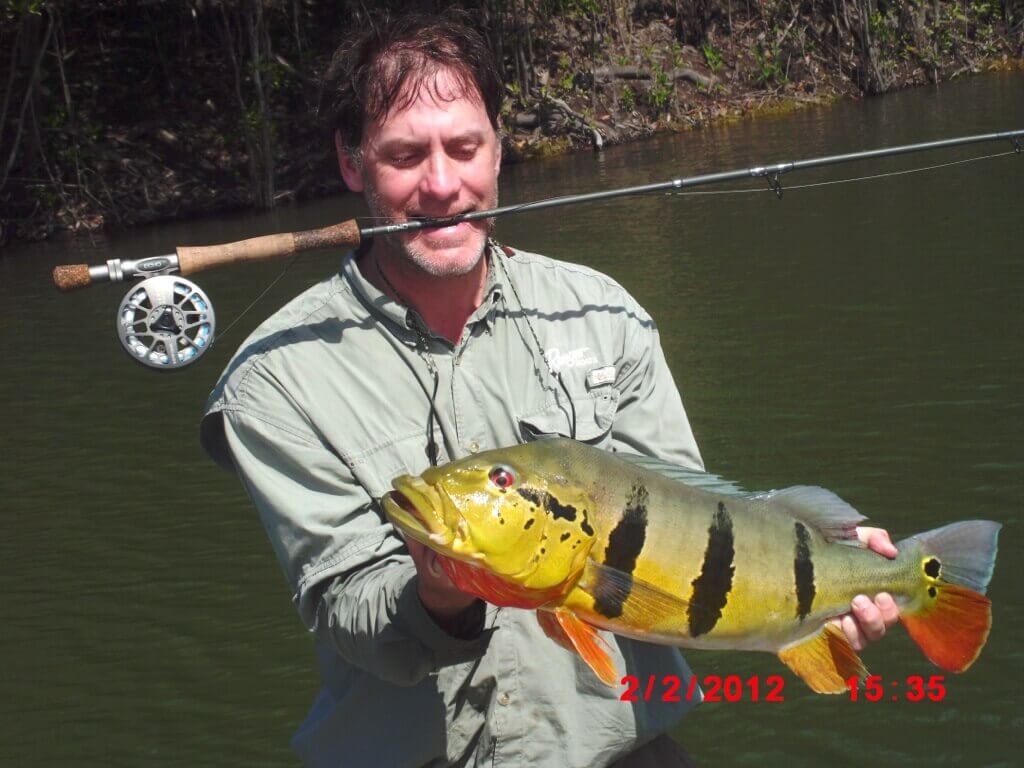 This lodge was recently named the #1 fly fishing lodge in the world by Forbes Magazine. It is situated on the Agua Boa River in northern Brazil, a 1.5 hour flight north of the city of Manaus, deep in the Brazilian rainforest. The Agua Boa flows through one of the most protected areas of the Amazon, before entering the Rio Branco, which in turn joins the Rio Negro. With an Ecotourism Reserve Status, and its permanent protection from the Brazilian Environmental Institute, the Agua Boa and its surroundings are protected from illegal commercial fishing, hunting, and deforestation. The added protection given to the region provides a wonderful environment for species such as the endangered Amazon river turtle, giant river otters, monkeys, parrots, bracket deer, and jaguar.

A strict catch and release, single barbless hook, fly fishing only policy has led to a large population of top quality fish. For the most part, the Agua Boa is a clear-water, white-sand bottom river that offers ideal sightcasting opportunities for three of the six species of peacock bass butterfly, spotted, and temensis. The butterfly peacock bass is the smallest and most common specie found in the area. Averaging 4-6 pounds, they are particularly abundant in the many lakes and lagoons. The spotted peacock is a bit larger and can be found in small pods cruising along the river bottom. Finally, the temensis is the big fella, and can reach weights of well over 20 lbs.!

In addition to the river, there are numerous oxbow lakes and lagoons along the river that harbor plenty of big bass. Thus far, there have been 18 different species of fish caught on the Agua Boa, all on the fly. 8-10 wt. rods with matching reels equipped with a floating line and a popper is recommended. A couple of spare spools with an intermediate and fast sinking line with a supply of medium to large streamers is also a good idea.

The lodge was constructed on the high river bank, some 30 feet above the Agua Boa itself. Built largely of local materials to the highest standards, it boasts a club house, large dining room, living room, bar and game room. Outside, there is a 20 meter swimming pool and poolside “dry” and “wet” bar. Next to the pool is an outside eating area, which plays host to a barbeque, held at least once a week during your stay. The lodge can accommodate up to 12 anglers in 6 double occupancy air-conditioned chalets. Each chalet has private bathroom with large walk-in showers and dressing rooms, wireless broadband internet access and refrigerator.

Beginning June 17th, 2019 a travel Visa into will no longer be required to visit Brazil.

Rates are per person based on double occupancy/shared guide.

Early Friday morning, you will fly from Miami to Manaus where you will be met by our representative and tranferred to your hotel of choice. Early Saturday morning you will depart Manaus via private charter to the lodge or houseboat. The following Saturday you will depart the lodge for a mid-morning flight back to Manaus. Schedule your return flight home this afternoon.