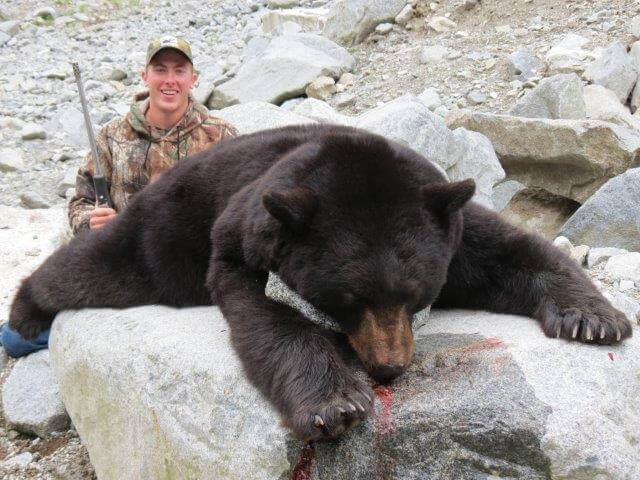 This outfitter grew up hunting coastal British Columbia and has a great reputation for offering quality black bear hunts. Canada’s British Columbia has the highest population of Black Bears in North America and contains approximately thirty percent of Canada’s Black Bear population which has doubled over the last century. The average BC Canadian Black Bear on the coast of BC squares six feet or more with a high percentage of skulls sizes making the record book. This outfitters hunting concession consists of hundreds of square miles of the perfect habitat for Black Bears. Boats, 4×4 vehicles and ATV’s are used to access the hunt areas where you will begin your exciting spot and stalk hunt. Accommodations are comfortable float houses, cabins, ranch house (depending hunt location) with all the amenities: electric lights, hot showers and comfortable beds. Fresh seafood such as prawns, crabs and oysters go well with the breath taking scenery at each camp. With such a large area, each hunter will have a camp exclusively with a large area to hunt. These bears are similar to that of neighboring Vancouver Island as they too key in on the many salmon streams fattening up before hibernation. Record books bears have been harvested here in recent years and most bears will square over 6 -7 ft with 18-21″ skulls.
If you’re looking for an exciting spot and stalk trophy black bear hunt with hardworking professional outfitter and guides then you should give this hunt a try. This is one of our most popular Black Bear destinations. #369

*hunt price does not include $200 GOABC, License and Tag

Day 7:The outfitter will transfer you to Vancouver where you will either overnight or begin your return trip home.

*Outfitter will determine your hunt camp at the time of booking.

All participants must read rules and regulations pertaining to method of take and be within the state/country’s guidelines. WTA is not responsible for failure to meet any state/country requirements.
Request Info
or
Call 1-833-486-8672