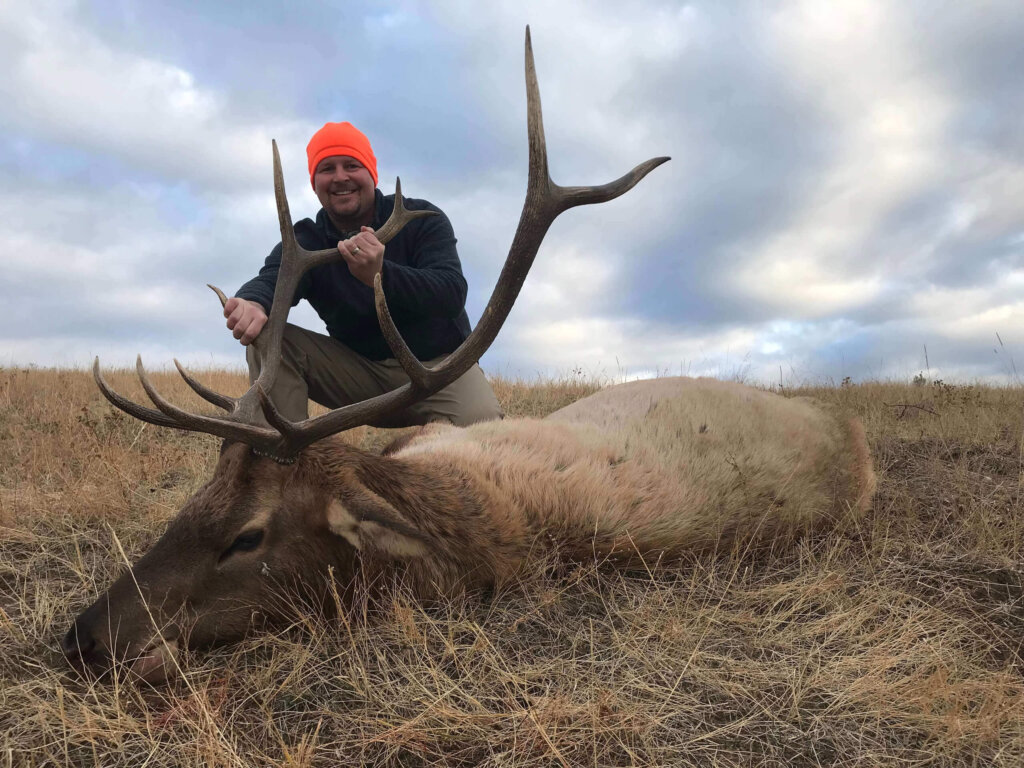 Few places in the west compare to the game rich lands of northwestern Colorado. The two pieces of property that make up this 50,000 + acre ranch lay between 6,000 -9,000 feet in elevation. Due to these large elevation changes you find ecological diversity that can support large elk herds throughout the year. This portion of Colorado has some of the highest elk densities in the entire U.S. During the summer and early fall bulls can be found at higher elevations amongst aspen pockets, oak brush, and lodge pole pines. During the morning and evenings they will often be spotted in the large; open meadows and parks that dot this mountainous landscape. During this time period hunters can expect to use a mix of spot and stalk as well as calling to hunt these rut crazed bulls. As fall turns to winter and the rut concludes bulls will begin their trek to the winter grounds. Here you will find much more open terrain made up of smaller trees, oak brush, and sage. This area lends itself very well to glassing up groups of bachelor bulls and planning a stalk. The rolling topography and small canyons coupled with a developed road network make for an enjoyable hunt that is typically not physically demanding. If you once believed your elk hunting days were past due to physical limitations, they’re not. A late season hunt here is the perfect solution.

Being both the outfitter and ranch owner this family run operation takes a conservative number of hunters each season and strives for success. On top of conservative offtake you will find dedicated refuges within the ranch ensuring the resident herds always have a safe haven to retreat.  Historically they have averaged over 90% success and near 100% opportunity on bulls over their 30+ years offering guided hunts. Due to the fact this property is enrolled in Colorado’s Ranching For Wildlife program no draw is required. Licenses are purchased over the counter using a voucher provided by the ranch.

After the days hunt you will return to the beautiful four bedroom/ three bathroom lodge. Before enjoying a delicious meal prepared by the full time cook you can relax in the large bar area or retreat to one of three patios, each equipped with a fire pit.  The lodging facilities found on the ranch are sure to not disappoint. Due to significant snowfall amounts the lodge will become inaccessible which forces all hunts to be conducted from a local motel in Craig, CO. Historically the lodge gets “snowed out” the first week of November.

Alcoholic beverages are not included in the price of the hunt.

After the days hunt you will return to the beautiful nine bedroom/ five bathroom lodge. Three rooms offer two beds while the remainder offer single beds. Before enjoying a delicious meal prepared by the full time chef you can relax in the large bar area or retreat to one of three patios, each equipped with a fire pit.  The lodging facilities found on the ranch are sure to not disappoint.

Hunters will need to fly into Hayden, Colorado where you will be met by the outfitter and transferred to camp. If you are driving directions into camp will be provided.