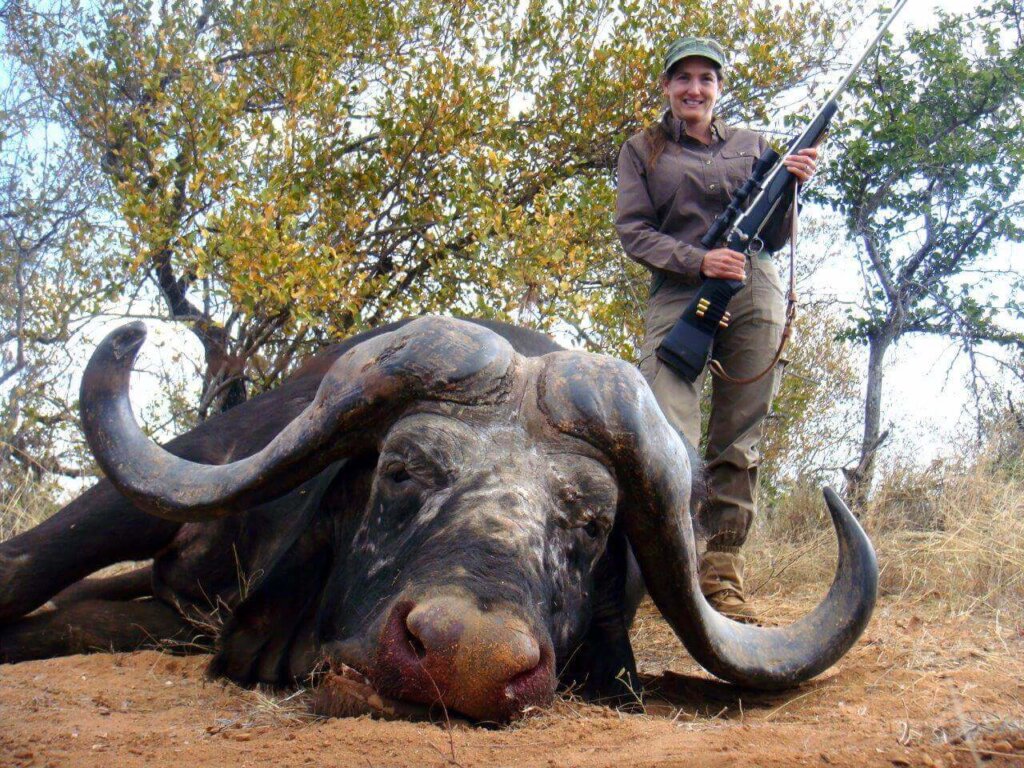 This free-range Cape buffalo hunt is conducted in the open reserve system and includes large tracks for private APNR (Associated Private Nature Reserves) concession without fences bordering the large famous national park in the Northeast corner of South Africa. These reserves have their own resident healthy populations of game. There are lots of Buffalo in the reserve and combined with small quotas it makes for a quality hunting opportunity. A recent aerial survey revealed over 1,300 buffalo on the concession.
Our outfitters safari area in excess of 30,000-acres is excellent hunting for Free-range Cape buffalo, elephant and limited plains game.

Camp is nestled in the shade of big acacia trees at the foot of the Drakensberg Mountains and consists of 5 chalets. A very scenic setting where during the dry months Nyala and impala come to feed on the lawn.

Guests are treated to traditional South African home cooking. Great care is taken to prepare game hunted on the safari for those hunters who wish to taste the delicious venison. Fresh vegetables, mostly grown in the area and salads are served with all meals.

Our outfitter hunts on a conservancy established in 1993 and situated in the North Eastern part of South Africa, known as the Lowveld, and also home to the jewel of African Game Reserves – The Kruger National Park, and South Africa’s prime Big-5 destination. The ecological benefits of this initiative has made the region a popular safari destination and conservation efforts have ensured that the wildlife population includes all of the Big-5 game: lion, elephant, Cape buffalo, leopard and rhino have space to roam freely.

Quotas are extremely limited and early bookings are advised. Whether you are interested in hunting Elephant, Cape buffalo or pursue the plains game, our outfitter will make sure that your African Hunting Safari is an unforgettable one! They pride ourselves in offering personalized hunts, giving our hunters the exclusive use of camp and making sure they get the best African Experience.

Packages also include; 14% vat on day rates and trophy fees for species listed in package

Sample Itinerary
Day 1: Depart from home and fly to Johannesburg, South Africa
Day 2: Arrive in Johannesburg, Clear customs and overnight
Cabela’s Travel can assist you with B&B and firearm transition service
Days 3: Morning flight to Hoedspuit, South Africa where you will be met by the outfitter and transfer to camp.

Departure Itinerary
Day 1: Depart camp for Hoedspuit where you will take a domestic flight to Johannesburg
Upon arrival in Johannesburg you will collect your bags and re-check in for final international flight home
Day 2: Arrive in USA, clear customs and continue home

WTA strongly suggest you hire a transition service to assist you with clearing your firearms.
Please call for further information at 1-800-884-9332.