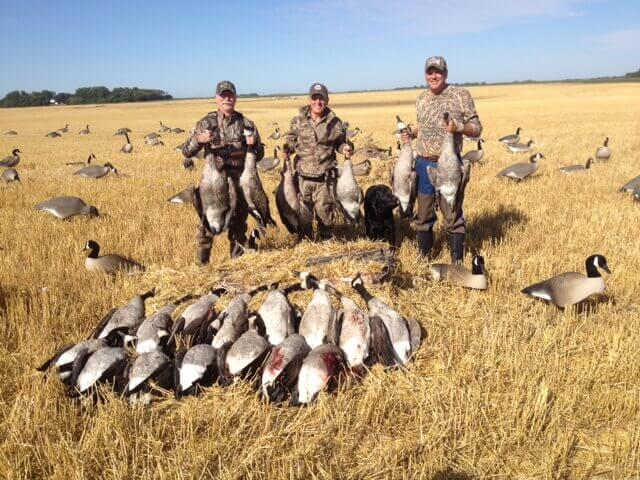 In recent years, the Greater Canada Goose population has exploded all across the Midwest. Eastern North Dakota’s pothole and agricultural region boost increasing numbers of breeding pairs successfully producing on average 7-10 goslings per year. Annually farmers in this region have reported hundreds of thousands of dollars in crop damage over the past few years. Due to the continued problems, the North Dakota Game and Fish Department (NDG&F) has initiated depredation early Canada Goose season that typically begins in mid-August and ends in mid-September. This is a great hunt to kick off your waterfowl hunting year as it is one of the earliest seasons available.

Hunts typically start at the end of August  (depending on the year) each season to assure bird maturity and feeding patterns are established. This is an exciting hunt and daily bag limits are 6-10 Honkers per day (set by game and fish annually). These hunts are conducted in agricultural fields from layout blinds and full-bodied decoys or in shallow ponds with floaters. This is the ultimate hunt for sportsmen looking to decoy these majestic large birds during the early season. The official season limits will be announced by the NDG&F sometime in late July and early August. These early season hunts typically produce high success however they can be weather dependent on bird movement. This is one of the few lodges that cater to smaller groups and offers exclusivity with groups of 6-10 hunters.

Accommodations are first class with their newly constructed 6,000 square foot lodge. The lodge offers double or single occupancy with home-cooked meals served daily. This is the perfect location for hunters looking to hunt with their own group in a smaller first-class setting. Due to the exclusivity of the lodge, they limit their annual hunts to 4 early season groups per year. This is one of the best-priced hunts available with first-class accommodations so give us a call today to reserve your spot. #162

Fly to Fargo ND, where you will be met by outfitter

*Hunt Prices based on the number of hunters in group.