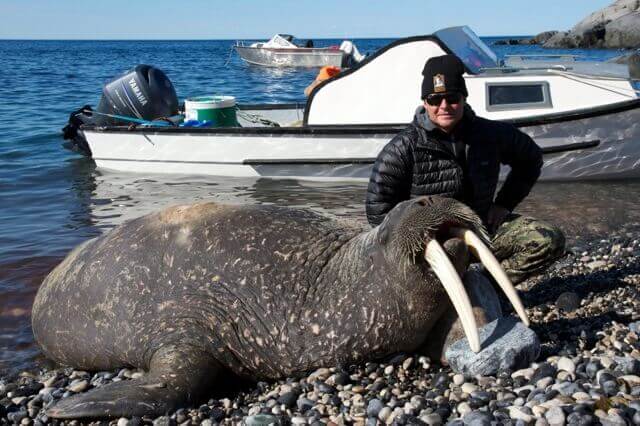 This outfitter actually pioneered walrus hunting in Nunavut, conducting the first non-resident, non-aboriginal hunt in 1995. Walrus hunts are carried out of select Inuit communities in Nunavut with the use of motorized boats to transport you to the hunting areas. When Walrus are spotted, they are stalked while resting on large ice flows or small rocky islands. The success rate to date has been 100 percent.

Shooting ranges are close in, usually under 35 meters (approximately 40 yards). A brain shot, or even better, a neck shot for instant kill is recommended. The outfitter recommends rifle calibers nothing smaller than a .300 Winchester magnum for walrus. Even better, are calibers such as .338 and .375 or European calibers of 8X68 mm or 9.3 mm. Ammunition, by law, must have expanding bullets such as Barnes X, Bear Claw, Nosler Partition or equivalent. Rifles should be equipped with low powered scopes such as a 1X4 variable magnification scope and sighted in for 25 yards. Walruses are the gentle giants of the Arctic. They are among the largest pinnipeds — fin-footed, semiaquatic marine mammals. However, while they have an intimidating size, and are carnivores, these animals are not aggressive. Walruses have large, flabby bodies covered in brown or pink skin. Short fur covers most of their bodies except for their fins. Their faces feature two small eyes, a mustache and two long tusks. Walruses weigh from 1,320 to 3,300 lbs. and can be as long as 10.5 feet. Males are about twice as big as females, have longer and thicker tusks, and usually have thicker skin.