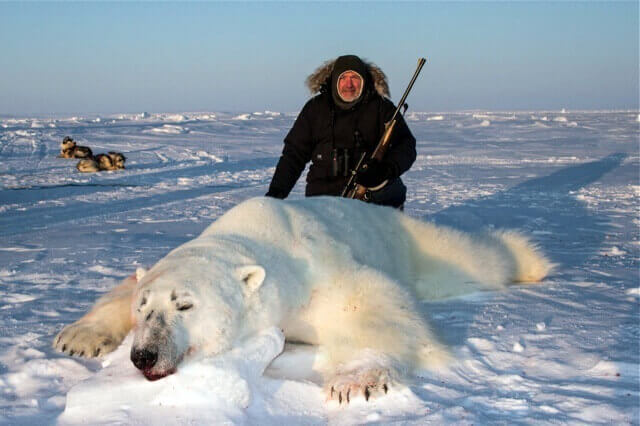 March 1 to May 31 is the date range that Spring Hunts occur. Exact starting dates are negotiable with Arctic air travel flight schedules taken into consideration, and are covered in each client’s hunting contract.

Note: If extra hunting days are needed, to a maximum of 5, they will be at the additional cost of $1,000 CAD per day payable directly to your guide.

This outfitter is the longest operating outfitting company in Nunavut offering the very finest in polar bear, Greenland and Barren-Ground Muskox, Central Canada Barren-Ground and Arctic Islands Caribou, Barren-Ground Grizzly and Atlantic Walrus hunts. Actually, this outfitter has pioneered polar bear hunts in the high arctic since 1981, and has maintained virtually 100% hunting success rate for the Resolute area.

Hunting is done from camps situated in prime areas that may be up to 100 miles from the village of Resolute. Muskox are found south of Resolute and can be hunted after a polar bear hunt as well. All of their hunts are normally 10 days long on a 1 on 1 guide ratio (one guide and dog team to every one hunter) or 2 on 2 guide ratio if you choose to do so. The hunt ends when a polar bear is harvested, even if this happens in the first day or two.

Canada’s Arctic is home to about 15,500 polar bears, consisting of two thirds of the world population. Canada is a proven world leader in the management, research, monitoring and conservation of polar bears and since 1975, the polar bear population has actually increased in Canada. Polar bears are long lived and wide ranging carnivores, with seals serving as their primary food source.

Canada’s management system is designed to respond to the full suite of threats to polar bears and their conservation, including climate change. A sustainable harvest is implemented through agreements and quotas, involving local people and governments have been in place in Canada since the 1970’s. Harvest quotas are based on the principles of conservation and aboriginal subsistence hunting, and are not market-driven whatsoever. The actual harvest level of polar bears is often less than established quotas.

HARVEST LICENSE & TAG FEES:
The Government of Nunavut fees for a foreign non-resident harvest license and tags are as follows:

Government fees are subject to change without notice

In the event that the outfitter cannot obtain a tag for the client to hunt polar bear, all monies paid for the polar bear hunt will be returned to the client in full. Another option would be to roll over the monies collected as a deposit towards a different year with price adjustments if applicable.

Note: There is a 50% refund on the 5% Federal Goods and Services Sales tax (GST) to foreign non-residents of Canada applicable only on the hunt cost

Hunting is carried out on the sea ice in prime areas that may be up to 160 kilometers from any one of the Inuit communities. Mobile tent camps are set up nightly after each day’s hunting activities.

Travel to Edmonton, Alberta and then to Cambridge Bay. From Cambridge Bay, all travel is taken care of by the outfitter.

Hunting is carried out on the sea ice in prime areas that may be up to 160 kilometers from any one of the Inuit communities. Mobile tent camps are set up nightly after each day’s hunting activities.

SEAL HUNTING:
This is a polar bear hunt. Hunting of seals during or after a polar bear hunt may be possible at the guide’s discretion and arranged by the client with his guides. The client must first obtain a seal license for $5 CAD at the wildlife office. However, sealskins or any by-product thereof are not importable into the United States or Mexico and other foreign clients should check import laws of their own country.

SPECIAL NOTE – REPEAT HUNT:
In the event that a polar bear is not taken during the scheduled 10 day hunt, the client has the option of returning for another 10 day hunt before May 31st, which is the end of the prime season.