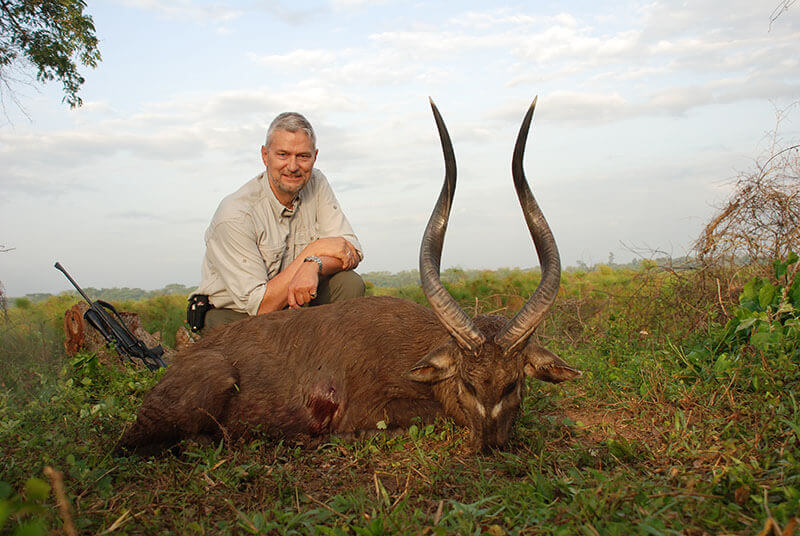 Hunting season is from January through November.

It rains all year round (which is why the country is so lush) with slightly more rain on average in April-June and November.

However, the rainfall varies from year-to-year.

The best time to hunt Buffalo and Hartebeest is during the months of December to end of April.  After that the grass is too high and hunting buffalo becomes challenging.

All other species may be hunted year around.

The Republic of Uganda is located on the East African Plateau, averaging about 3,600-feet above sea level, which slopes steadily downwards to the northern plains.

Uganda lies almost completely within the Nile basin.  The Victoria Nile drains into Lake Kyoga, then into Lake Albert. Although generally equatorial, Uganda’s climate is not uniform as the altitude affects the climate, but temperatures rarely climb to the 90’s F during the day or drop to the 40’s F at night.   Although landlocked, Uganda contains many large lakes. Much of the south is poorly drained, while the center is dominated by Lake Kyoga and surrounding marshy areas. In addition to Lake Victoria and Lake Kyoga, there is Lake Albert, Lake Edward, and the smaller Lake George.  Southern Uganda is wetter, with rain generally spread though out the year. At Entebbe, on the northern shore of Lake Victoria, most of the rain fall occurs March through June  and again November through December.  Further to the north, a dry season gradually emerges with January and February being much drier than the rest of the year.

The southern part of the country includes a substantial portion of Lake Victoria, within which it shares borders with Kenya and Tanzania.  Uganda takes its name from the historical Buganda kingdom, which encompasses a portion of the south of the country, including the capital city of Kampala. Most of the major cities are located in the south near Lake Victoria, including the capital, Kampala and the “airport city” of Entebee.  Upon arrival at Entebee Airport you will be met by the outfitter and overnight in a good three-star hotel in Kampala.

All our camps and lodges are semi-permanent structures equipped with 24/7 power supply and satellite internet.  The internet can only be used of emails and Skype calls. Lodging in the field will consist of traditional East African safari tents or traditional grass thatched tented bungalows serviced by full camp staff. The cooks provide three solid meals each day with the menu consisting of a variety of cuisine including; Indian, African, German, Italian and Chinese.

Sitatunga safaris for the elusive ghost of the swamp are under taken in the Kafu River Basin and in the papyrus belts along the banks of River Nile.  Our areas hold the highest density of Sitatunga anywhere in Africa.  It is not uncommon to see between seven to twenty-five Sitatunga (males, females & young ones) daily in the course of your safari.

Sitatunga hunting involves quite a bit of preparation.  Before the start of a safari the papyrus has to be slashed at least three to four weeks ahead of time and a cerebeti (elevated platform) must be built in either a tree or on floating papyrus.

The huge Kafu River Basin stretches along Lake Kyonga, Kafu & Mayanja Rivers and covers the seven districts of Luwero, Nakaseke, Nakasongola, Kiboga, Kyankwansi, Kiryandongo and Masindi covering about 5,000,000 hectares. The landscape in Kafu consists mainly of Papyrus swamps and dense bush thickets making it a prime hunting ground for the East African Sitatunga, East African Bush Duiker, East African Bohor Reedbuck, Nile Bushbuck, Ugandan Defassa Waterbuck, Leopard, Common Oribi and Bush Pig. They hunt in Kafu from January to December.  This is the best concession for big Sitatunga.  Their average is 26 inch with quite a few bulls taken in the 29 to 31.5 inch range.

Aswa Lolim Ranches covers the sub-countries of Purongo, Alero, Anaka and Koch-Goma.  Although many commercial farmers have settled in this prime hunting ground, it is still realistic to get Nile Buffalo, Uganda Kob, Hartebeest and Waterbuck.  Aswa Lolim lies on the eastern side of the Nile.  It covers 500,000 hectares and shares 110km direct border with Murchsion Falls National Park in the south and about 78 km with the Nile in the west.  The landscape is dominated by light rolling grass hills with palm trees, small valleys with creeks and light forest.  Near the river you find dense forests and large stretches of papyrus swamps. They hunt Aswa-Lolim from January to end of April.

Lake Mburo North is situated in the South West of Uganda around Lake Mburo National Park.  The size of this concession is 150,000 hectares.  The landscape is dominated by light rolling grass hills with bush thickets, small valleys with creeks and light forest.  Near the river you find dense forests and large stretches of papyrus swamps. The concession is rich with East African Bushbuck, Eastern Bohor Reedbuck, Sitatunga, Topi, Patterson Eland, East African Impala, Warthog, Cape Buffalo and East African Defassa Waterbuck.  Both Impala and Waterbuck exceed in horn length often over 30 inches. They hunt in Lake Mburo from January to December.

Karamoja North stretches South of Kidepo National Park and is rich in Buffalo, Jacksons’ Hartebeest, Oribi, Eastern Bohor Reedbuck, Chanler’s Mountain Reedbuck, Gunther’s Dik Dik and East African Defassa Waterbuck.  This concession is owned by a different outfitter with whom we cooperate. They hunt in Karamoja from January to July.

Ajai Wildlife Reserve is situated on the West bank of the Albert Nile between Wadelai Fort of Emin Pasha and the hunting camp of Roosevelt called Rhino Camp! Ajai has got Sitatunga, Uganda Kob, East African Defassa Waterbuck, Baboons, Warthog and Bush Pigs.  During 2015 we are going to trans-locate more Kob, Hartebeest, Waterbuck and Bushbuck to this reserve to increase game populations in general.  They hunt in Ajai from January to end of April.

All commercial and charter flights

Any problems associated with delays for any reason

Any expenses for overnights in lodges & National Park entry fees

Non-hunter $350/day inclusive of the conservation and concession fees