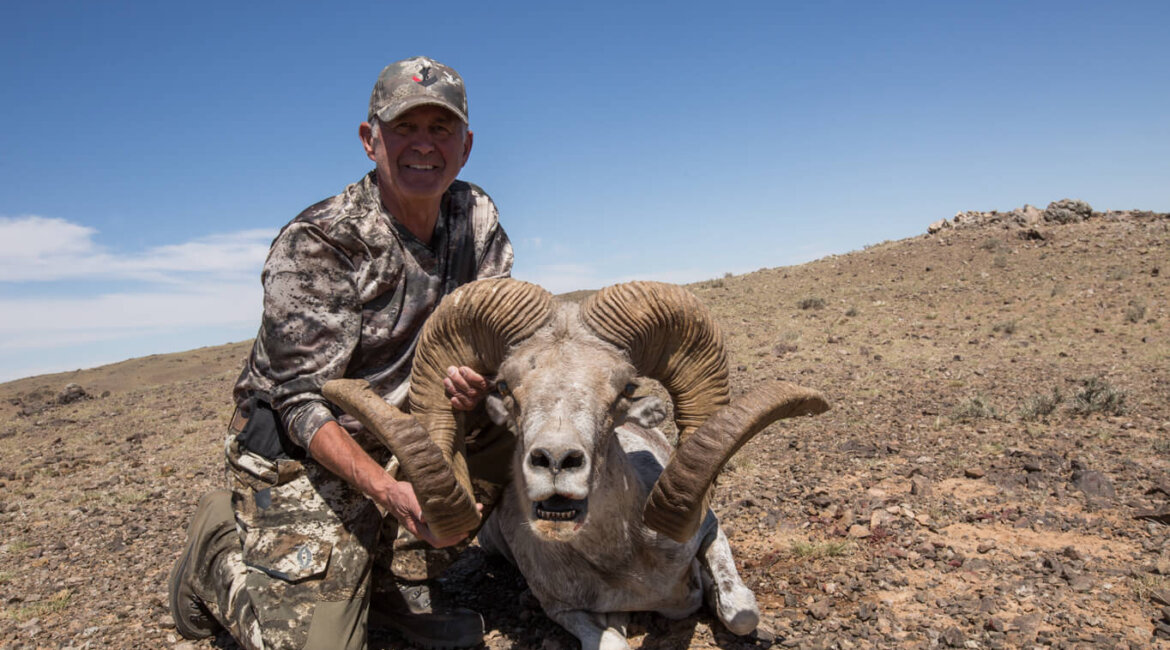 This past July I had the unique opportunity to hunt in the ancient country of Mongolia.  My hunt was arranged by my son, Mark Peterson, owner and consultant for Worldwide Trophy Adventures (WTA).  For someone who will be 70 in a couple of months, I told Mark that I wanted to hunt sheep, known as argali in Mongolia, in an exotic, but yet, safe destination that would challenge me but be doable.  I am in good shape for someone my age, but do recognize that some mountains are now too high and some hunting conditions are best left to younger hunters.   Mongolia, for the older hunter, was the perfect destination.

Getting to the other side of the world, comfortably, is part of the battle.  On the trip I was accompanied by my son-in-law, Eric Schlukebir and friend/cameraman Grant Boring.  Although we were traveling together, Eric and I were going to separate in Mongolia as we were hunting in different areas.  Grant was in Mongolia for filming as the footage may be used on “Cabela’s Instinct”, hosted by my son Mark.  It was a short flight from our homes in Michigan to Atlanta.  Then, it was a non-stop Delta flight of 15 hours to Seoul, South Korea.  Traveling that length of time allowed us to get a good sleep on the plane as we traveled to, literally, the other side of the world where the time was exactly 12 hours different than at home.  The flight from Seoul, on Korean Airlines, was only three and one half hours until our arrival in Mongolia’s capital city, Ulaanbaatar (also known an Ulan Bator, or UB by the locals).

For today’s hunting travelers, flying international with rifles can present some challenges.  We had applied for, and received permits for our rifles and ammo, prior to leaving the states.    At the UB airport, the serial numbers on our weapons were carefully checked for comparison to our permits and ammo was counted down to the individual rifle shell (we were allowed a maximum of 30 rounds).  Once everything corresponded, we were given permits for our rifle and ammo.  We had to carry the permits with us while in Mongolia and had to surrender them back at the airport in order to return home with our rifles.  At WTA, they have a service that helps international hunters when they are travelling with weapons and ammo.  I strongly suggest that every international hunter take advantage of this service so that there are no hiccups when traveling.  On our flights to Asia, I did not see anyone else traveling with weapons but with the prior planning we had (with the exception of needing to use special lines that took a bit longer) no problems either traveling to Mongolia and returning home.  Again, take advantage of the WTA service to help you have all of the proper documentation.

We were met at the UB airport by our outfitter and some of his guides and drivers.  After introductions all around, we arrived by 11 PM, at a very nice, modern hotel.  The night was short, but after a quick shower and breakfast, we were on our way to our Gobi camps.  Eric went one direction while Grant and I went another.  Mongolia is a huge country, similar in size to Western Europe that is a landlocked plateau located between Russian Siberia on one side and northern China on the other. Travel from UB to the Gobi camps was in comfortable Lexus 4×4 vehicles.  We needed comfortable vehicles as what I learned was that in this very large country, our camps were often as far as 8 hours, or more apart.  Some of the travel would be on paved roads, while some of it was down 2 tracks cut in the grasslands. For our hunts in Mongolia, we were staying in three different camps.

The Gobi Desert occupies nearly 1/3 of Mongolia.  As a country Mongolia is about 5000 feet above sea level and the Gobi Desert is basically quite flat with some rolling hills and occasional dry, rocky mountainous areas rising above the sparse vegetation on the lower area.  Having hunted sheep previously, it was obvious where the argali would be.  The rocky mountainous areas looked to oftentimes be maybe five mile by five mile areas jutting above the desert floor and the mountainous areas were often separate from other similar areas by much longer distances.  Sheep would want to stay in the higher areas.

We were traveling with our outfitter, TugSo, our driver and a cook.  At camp #1, we met two local guides who were to assist us.  Hunting in Mongolia is carefully monitored.  The government has areas protected for hunting that make up +/- 15% of the country.  In those areas only a very limited number of animals can be harvested.  The goal is to take the oldest animals and build numbers.  My Gobi Argali license was the only one issued in that year for the area we were in.  Eric was in another area and the same was true for him; he had the only license there.  After a quick sight in of my rifle to assure nothing happened during travel, we were off to the nearby mountainous area to glass.

We parked and walked in about one half mile to survey the surrounding area.  The local guides had told our outfitter that they had seen a really old, large argali in the area.  He was the one we were looking for.  In the two plus hours prior to sunset, we saw about a dozen different rams, including one that walked up to within 100 yards of us.  To me, he was a giant and larger than any other sheep I had ever seen in the wild. TugSo said that he was the size an average Gobi Argali taken by hunters but that he felt we would eventually find and see the old magnificent ram.

Back at camp, the locals had killed a sheep from their herd so that we would have fresh meat for dinner.  We had mutton ribs, salad and fruit prior to spending the night in our Ger.  I will explain more about Gers later.  We went to sleep about 10 and breakfast came early as it was served at 4 AM.

Back in our 4×4 we traveled back to the mountainous area.  We would drive, get out and hike a bit to a glassing area and then repeat the process.  Our guides were looking for that particular old ram.  We finally spotted him with five others.  He was very light in color, almost white, and because of this, he was easy to distinguish from others in the group.  The rams knew we were there, so it became drive, park, and then get out and stalk hunt as we tried to predict where we could get ahead of the group. The rams were continuously traveling around the perimeter and did not want to head out over the open grasslands.  The group was fast and we always seemed to be a mountain top, or two, behind them.  After lunch, we set out again trying to predict which mountain top or side they might appear on.  We kept looking and eventually, there they were, crossing left to right about 300 yards in front of us.  They were running and I didn’t expect to get a shot as the rams were moving together in a group and the old guy was surrounded by others.  Just as they were ready to go over a ridge and go out of sight, the old ram stopped and turned broadside and was clear for a shot.  Down he went.  Walking up to the ram I could not believe his size.  He was the largest ram I had ever taken or ever will expect to take. He was a truly magnificent ram! 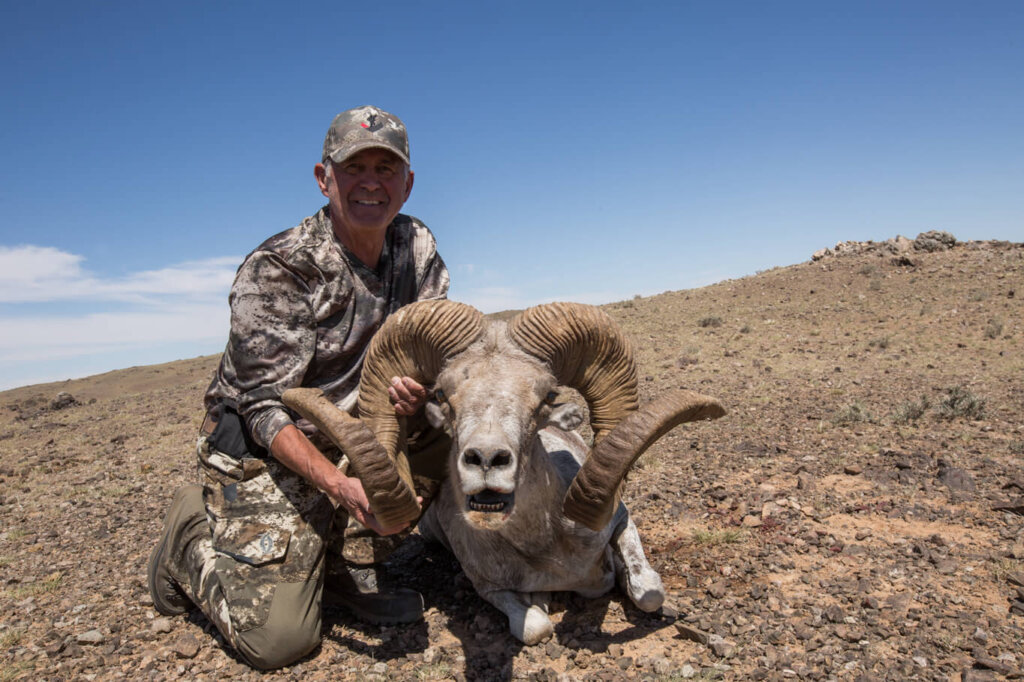 Back at camp, our guides did the trophy care and he was measured and aged.  The old ram was 12 years old and is expected to be the 3rd largest Gobi Argali ever scored.  He is waiting in Ulan Bator for official scoring this fall.  I am not usually one of those hunters who have his animals “scored” because that is not why I hunt.  I am looking for the experience of hunting new animals in new areas and whether my trophy is record book, or not, is not that important to me.  Now, I admit, I do, from time to time, like to shoot something really big but at nearly age 70, I just want to be able to continue hunting for as long as I am able.

In my profile at WTA, I list that I have a bad back but that I am able to walk long distances and climb up some mountains but am no longer able to do extreme mountaineering.  WTA was able to match my age and abilities to a hunt that I could be successful on.  My trip to Mongolia was the perfect hunt for me.  In a couple of upcoming blogs, I will further explain my Mongolian adventures when I go after my Hangai Argali and Gobi Ibex. 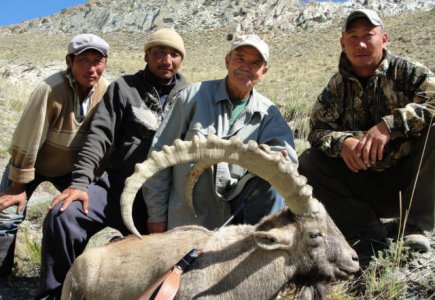