Win the Adventure of a Lifetime! 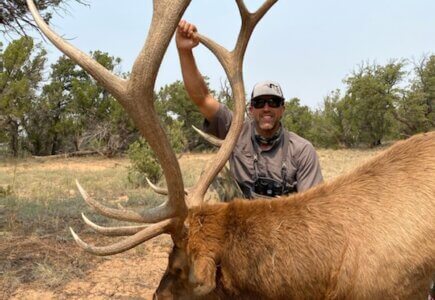 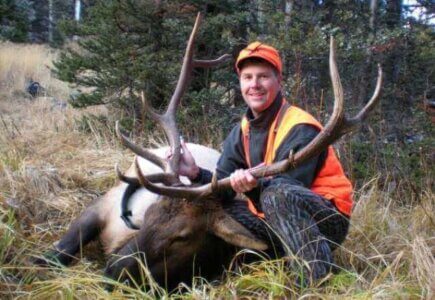 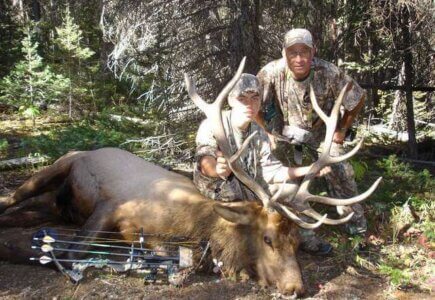 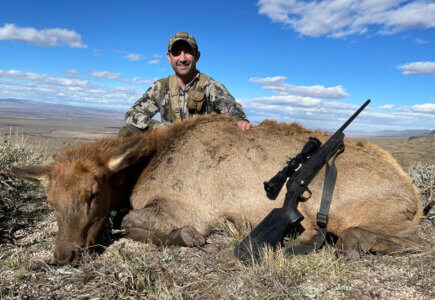 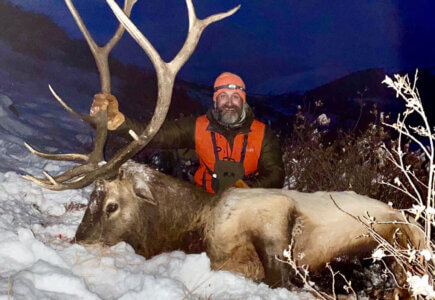 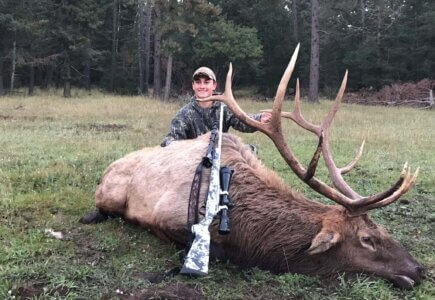 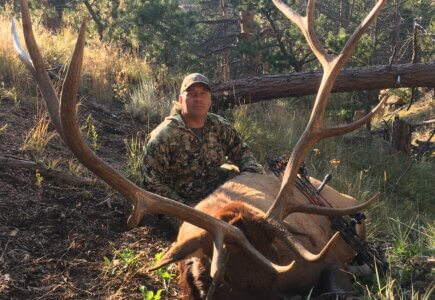 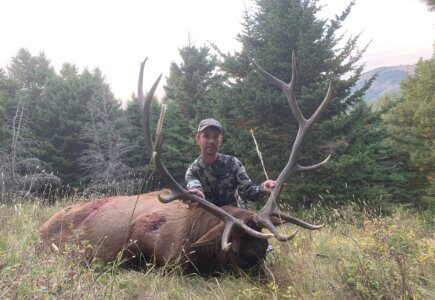 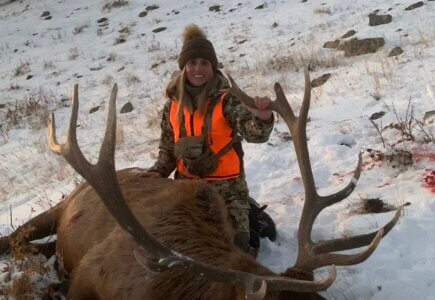 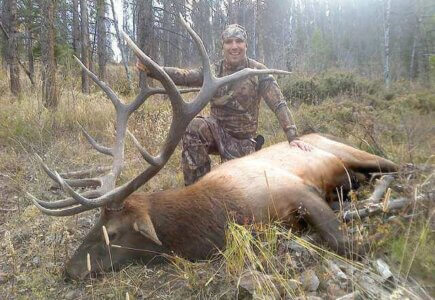 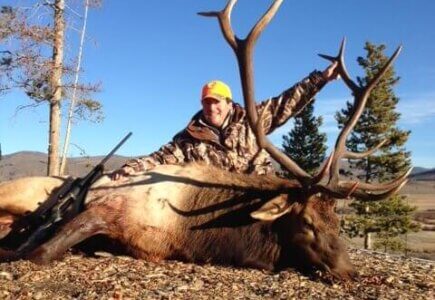 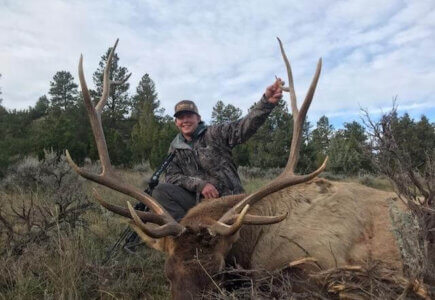 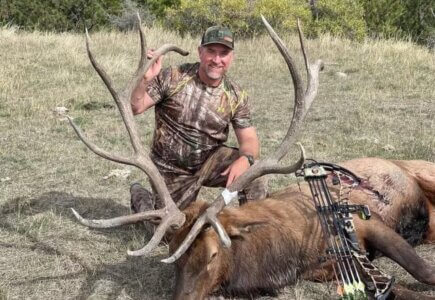 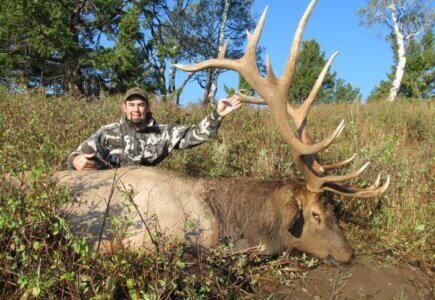 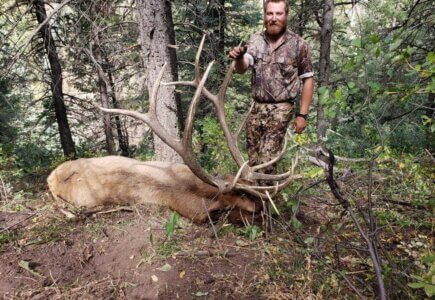 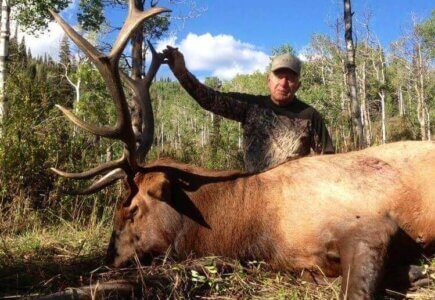 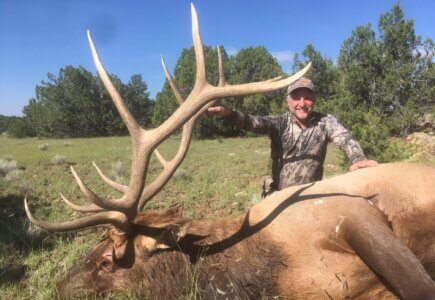 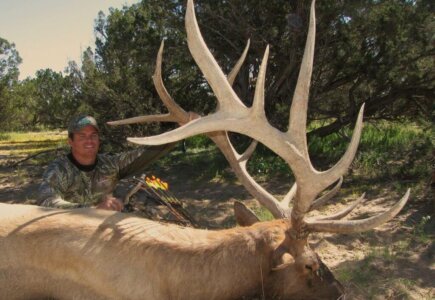 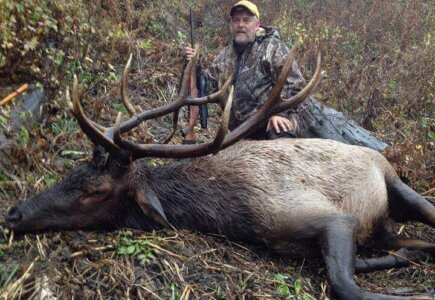 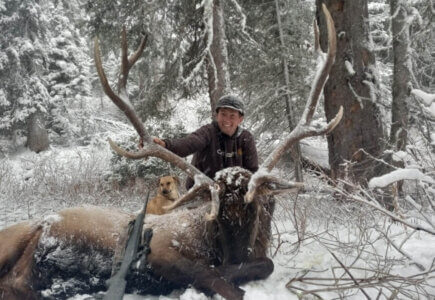 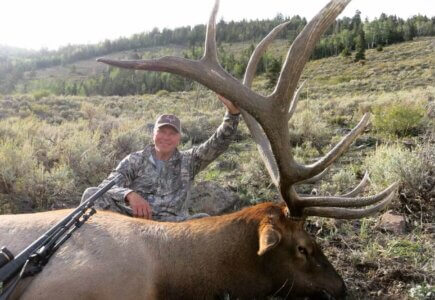 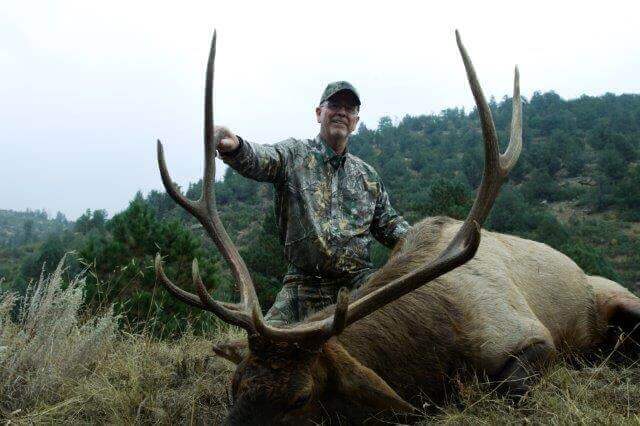 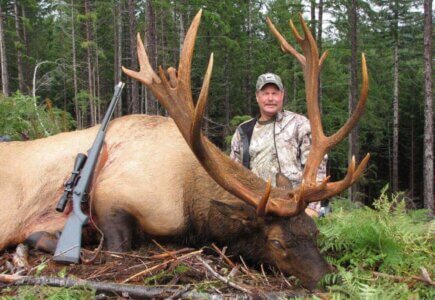 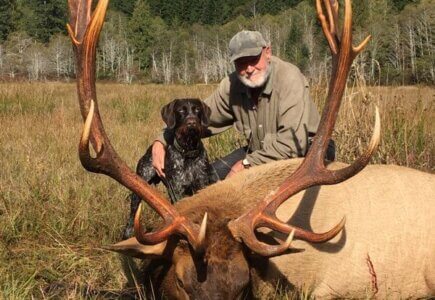 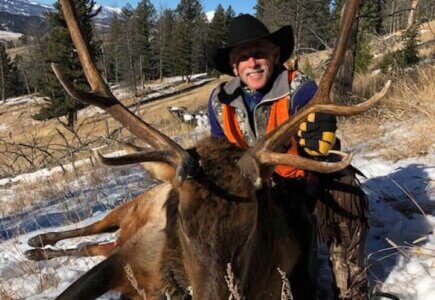 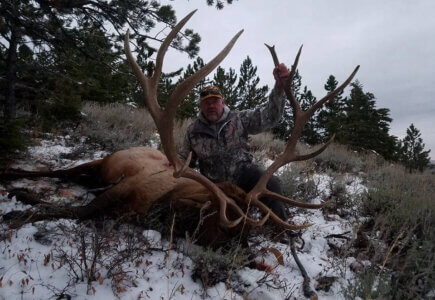 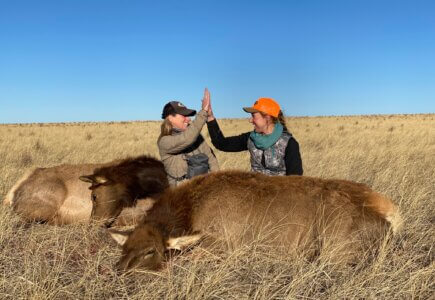 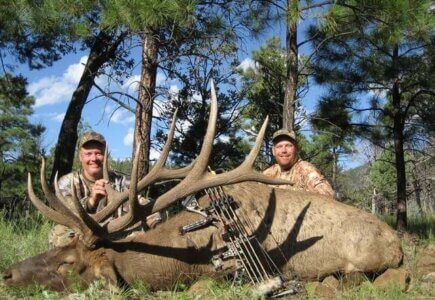 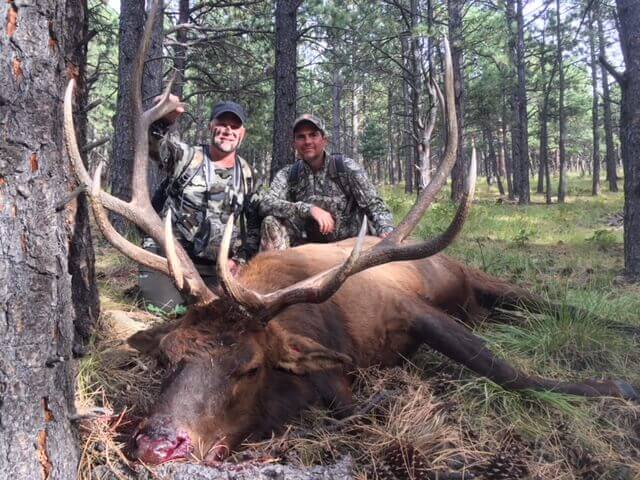 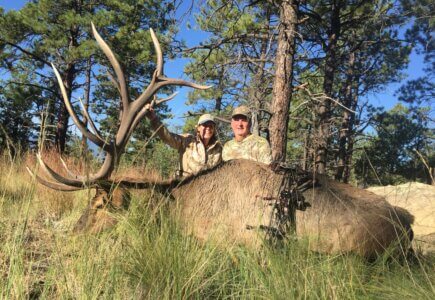 To many, hunting big bull elk is the epitome of big-game hunting in North America. Elk hunting has been called the toughest day-in-day-out hunt due to the remote habitats the naturally wary animals prefer. Every year, hunters take up their firearms and archery gear and head into those mountains hoping to hear the echoing bugle of a bull elk protecting his harem of cows.

Elk, also known by the Native American name – wapiti, is a conservation success story. Indiscriminately hunted as European settlement spread west, their numbers dropped precipitously from the 10 million thought to have roamed most of what became the United States and parts of Canada until a conservation-minded handful of sportsmen came up with a plan to save the dwindling population by implementing hunting restrictions and a transplantation plan that returned elk to much of their original range. Now, the population of elk in North America is estimated at well over 1 million.

Types of Elk and Their Habitats

Four distinct subspecies of elk can be found in North America.

Rocky Mountain elk are most well-known and most often hunted, primarily because of they are the most numerous, the most widely distributed and subject to a variety of hunting seasons. As their name implies, their habitat is largely related to mountainous habitats and adjacent areas, though more and more they are found in agricultural areas as they increase their range under the watchful eye of game biologists. They can be found in the far reaches of the Yukon all the way down the Southwest, thriving in habitat as varied as thick fir, cedar, pine and spruce in northern climes to aspen and sagebrush in the nation’s midsection to scrub oak, pinon and juniper forests of Arizona and New Mexico.

Roosevelt elk live primarily in the Pacific Northwest, being fond of mountainous rain forests, and can be hard to find in the dense timber and thick undergrowth such as that found in the Cascades and on the Olympic Peninsula.

Tule elk, though rare, can be found in California, and only California. Generally, they can be found in remote areas, primarily out-of-the-way mid-state valleys, woodlands and swamplands to grassy hills along the coast. They are named for a plant on which they feed, a native sedge found in freshwater marshes.

Manitoban elk, recognized as the largest of the species, can be found from North Dakota to the southern regions of Manitoba, Saskatchewan and Alberta.

Two subspecies, the Merriam’s, which roamed the Southwest and Mexico, and Eastern, once found east of the Mississippi River, are both extinct.

How Big Are Elk

A bull Rocky Mountain elk will average about 700 pounds, a cow 600 pounds. A calf is likely to weigh about 35 pounds. Bulls stand about 5 feet tall at the shoulder and will measure 8 feet from nose to tail. Cows are about 4½ feet at the shoulder, measuring 6 ½ feet nose to tail.

Tule elk are the smallest of elk species, bulls averaging 400- to 500- pounds, cows only 300 pounds. Manitoban elk, on the other hand, are the largest, a bull weighing as much as 1,000 pounds, though antlers tend to be smaller than Rocky Mountain elk.

Rocky Mountain elk have the largest antlers, weighing up to 40 pounds on mature bulls. Only bulls have antlers, which are shed and regrown every year.

Interestingly, elk’s top two canine teeth are called ivories and are prized as mementos by hunters. They are thought to be holdovers from prehistoric times when they were saber-like tusks used to defend from predators or rival elk. If so, evolution has reduced them to rounded canine teeth, which both cows and bulls have; bulls’ generally being larger. Some refer to them as whistlers or buglers believing they play a role in bugling.

Rocky Mountain elk are the most populous (in part because many have been transplanted to other regions to restore elk to historic ranges), making up 90 percent of North America’s elk population and Roosevelt elk makes up most of the remaining 10 percent, while Tule elk are estimated to number 4,000 and Manitoban elk around 1,000.

As you would expect, mountainous states boast the largest elk populations. Colorado tops the list with largest population, with an estimated 290,000 animals. Montana is next with 160,000 followed by Idaho, 110,000 and Wyoming with 106,000. Arizona, New Mexico, Oregon, Utah, Washington have sizeable populations of Rocky Mountain elk. Oregon is home to the largest population of Roosevelt elk, estimated at 63,000, while Washington has 36,000. Other states have sustainable and growing herds as well, many offering hunting opportunities. Today, elk can be found in the western United States and, often thanks to reintroduction and conservation efforts, in more eastern states such as Arkansas, Kentucky, Michigan, Minnesota, Missouri, North Carolina, Pennsylvania, Tennessee, Virginia, West Virginia and Wisconsin as well as in Canada from Ontario to western reaches.

How to Hunt Elk

To many, the bellowing bugle of bull elk in the fall is an unforgettable part of the hunt. Bulls bugle (an ascending bellowing sound that transitions to a squeal and usually ends with a grunt or series of grunts) to attract cows, notify cows and satellite bulls that he is in charge and to warn or challenge other bulls. Hunters know if they reproduce the sound, they may trigger a dominant bull to approach looking to defend its territory and harem. Savvy hunters also use chirps and mews to mimic other cow elk sounds in hopes of drawing a bull within range.

Bowhunting seasons are typically open in early September to coincide with the rut, when bulls are most reactive to calling, hopefully affording the closer-range shots bowhunters prefer. Firearm and bowhunters alike know to seek remote timbered pockets elk prefer when pressured, though edge habitat can be productive as elk come out to feed.

Some hunters prefer to sit in such areas, or along traditional travel corridors or wallows they frequent. Others seek high ground to scour the surrounding area with good-quality optics, spotting animals and planning a careful stalk to get within range. At times, elk seem supernaturally alert, seeing, hearing and smelling danger at long distances. Catching a faint hint of human smell will usually cause them to disappear in an instant.

Scouting is essential to successful elk hunting. Plan accordingly, or book an outfitter who knows elk country like the back of his hand.

Hunting techniques are as varied as elk habitat. Still-hunting, stand-hunting, tracking, spot-and-stalk, even elk drives, all have their pros and cons, depending on conditions, location and who you talk to.

Similarly, archery, centerfire and muzzleloaders have their champions among the cadre of elk hunters. Whatever your choice, be prepared for an exhilarating, challenging, frustrating, demanding (physically and mentally) and rewarding adventure as you take on elk on their own turf.

And be prepared for the harvest, a harvest of pound after pound of healthy field-to-table meat, as well as what are likely to be memories to last a lifetime.